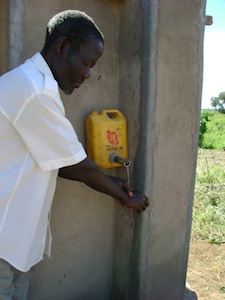 The country has reported more than 3,000 cases of typhoid since March. Typhoid is transmitted by the ingestion of food or water contaminated with the feces of an infected person. Most of the cases are from the country’s capital, Harare, and there have been at least two reported deaths

However, the use of the “bush toilet” or open defecation is a much-used practice, which the Zimbabwe government is concerned about. Zimbabwe’s Minister of Water Resources Samuel Sipepa Nkomo said it reflects the ingrained attitudes about sanitation and hygiene among the people in this southern African nation.

“We have a big problem with regards to open defecation and we have to put our heads together to deal with it,” Nkomo told IPS.

Zimbabwe paid a high price for its limited investment in sanitation and water programmes between 2008 and 2009. More than 4,000 people died from cholera and over 100,000 were infected because of poor hygiene and a lack of toilet facilities. Cholera is also is transmitted by the ingestion of food or water contaminated with the feces of an infected person.

“The spread of cholera said that our hygiene was poor and we were not washing our hands at regular intervals. Besides, typhoid is a disease of hygiene,” said Noma Neseni, executive director of the Institute of Water and Sanitation Development, a non-governmental organisation that is a regional centre for institutional capacity development in the water and sanitation sector.

Neseni said Zimbabwe’s challenge was to change people’s attitudes about sanitation and hygiene. “We are not focusing on hygiene promotion, but more on infrastructure, which should not be the case.”

Based on the most recent estimates of sanitation coverage in 2010, Zimbabwe needs to increase coverage from 52 to 77 percent in urban areas and from 32 to 68 percent in rural areas to meet the Millennium Development Goals, the eight international anti-poverty and development goals that the United Nations member states agreed to achieve by the year 2015.

“If there is persistent hand washing, no one will succumb to diseases,” said Neseni. “We have more infrastructural development, but infrastructure without the requisite attitude will not achieve much. We need hygiene awareness. Part of the problem is that we take sanitation and water as the preserve of the government; we need the private sector to work in partnership with everyone.”

These key issues are the focus of the second High-Level Meeting of the Sanitation and Water for All (SWA) partnership hosted by UNICEF in Washington D.C. on Friday Apr. 20.

The meeting has brought together more than 60 ministers responsible for water and sanitation and finance from over 30 developing countries. Also present are donors and civil society organisations committed to accelerating progress towards universal access to safe water supply, sanitation and hygiene (WASH) through increased investment.

According to the SWA briefing note, the ministers are expected to come up with resolutions on how to address the WASH crisis.

Nkomo was quick to admit to Zimbabwe’s poor performance in this area.

“On sanitation, we are bad, though we are better on water provision,” Nkomo told IPS from Washington D.C. “The outbreak of cholera in 2008 and typhoid this year were loud warning bells about the consequences of not spending more money in sanitation and water infrastructure. But we are making efforts to improve the situation once and for all.”

Nkomo, who is accompanying Zimbabwe’s Finance Minister Tendai Biti to the meeting, said the country was drafting a national sanitation and water strategy for presentation to stakeholders by the end of April.

“This will be a multi-sectorial approach to raise awareness about the dangers of open defecation, and we should not be found wanting when it comes to providing proper infrastructure.”

The strategy will guide investment and promotion of sanitation, and access to clean water in urban and rural areas. This week, Zimbabwe’s Ministry of Health and Child Welfare warned that waterborne cholera remained a threat.

Figures released this week by the Epidemiology and Disease Control Unit in the Ministry of Health and Child Welfare show that cholera cases for the first quarter of 2012 doubled to 8,154 from the 4,000 cases reported during the same period last year. Half of these cases were for children under the age of five. The ministry said it is planning to introduce vaccines to curb the number of cholera cases in children.