BULAWAYO, Zimbabwe, Apr 17 2012 (IPS) - Residents of Zimbabwe’s water-scarce city, Bulawayo, are concerned about the government’s slow response to finding a permanent source of water to cover their needs. 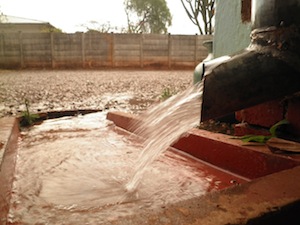 Bulawayo only has a 20-month supply of water left if the seasonal rains do not come. Credit: Busani Bafana/IPS

In March the city announced that it would only have a 20-month supply of water left if the seasonal rains do not come. Zimbabwe has experienced poor rains over the past few years.

Though the Zimbabwe Meteorological Services Department had predicted rainfall would peak from October to December 2011 for some parts of the country, it forecast that Matebeleland, would receive below average rainfall. Bulawayo is the country’s second-largest city, and although it is located in the former Matebeleland province, it is now treated as a separate provincial area.

Four of the city’s five supply dams, which have a total capacity of 362 million litres, are half full. The fifth dam is not operational.

As a result, municipal authorities have implemented a water rationing programme. Currently Bulawayo’s daily water use is 145,000 cubic metres, which the city council says needs to be reduced to 120,000.

But residents like Henry Sithole are worried that water rationing may become a permanent feature. Many feel that the government’s plans to revive a 100-year-old idea to draw water from the Zambezi River for Matabeleland South province, which includes Bulawayo, may take far too long to implement.

“Water rationing is serious and I think residents have experienced it for too long,” Sithole told IPS. “The Zambezi scheme should not be the only solution talked about because it will not end water rationing today or tomorrow, even though it is the major part of the solution.”

The Matabeleland Zambezi Water Project is a grand scheme, first suggested to ease Bulawayo’s water problems in 1912 through the construction of a pipeline from the Zambezi River to the city. The scheme has been postponed by successive governments because of the high cost of building the over 400- kilometre pipeline.

However, in March the government announced that 900 million dollars had been sourced from a Chinese bank for the building of the Gwayi-Shangani Dam, the first phase of the project. It is estimated to cost a total of 1.3 billion dollars.

But residents and civil society organisations want the government to declare Bulawayo a water crisis area, to speed up corrective action.

Civil society representatives drew up a petition in March. They aim to collect a million signatures to lobby the government to act on finding a secure water source for Bulawayo.

The regional chairman of the National Association for Non-Governmental Organisations, Goodwin Phiri, told IPS that a solution needed to be found soon.

“The government cannot ignore the issue of water because it is a national issue…we are saying it is time government proved its commitment because, without water, the region is as good as dead.”

Though the government is currently building a 42-km pipeline from Bulawayo to the Mtshabezi Dam, in Matabeleland South province, the project has faced resistance from local communities.

The Gwanda Municipality in Matabeleland South has complained that it was not consulted, and raised concerns that if implemented, the project would leave the town of Gwanda without water. Although the project is moving ahead for now, it remains uncertain whether it will be completed.

But water appears likely to become a political negotiating tool for votes as President Robert Mugabe’s Zimbabwe African National Union – Patriotic Front, one of the partners in the Government of National Unity, wishes to hold general elections later this year.

Civil society organisations see this as an opportunity to get political parties to act on the issue. However, no concrete date has been set for elections as the country battles to find common ground on a new constitution.

Economic analyst Eric Bloch, who was involved in the 1987 Matabeleland Zambezi Water Project, which has since become a national initiative, said that there was finally action on the project because it was aimed at drawing votes.

“Now with the awareness that we are likely to have the country’s most-contested elections, there is growing concern about acquiring votes within Matabeleland. Hence the government’s creation of the Distressed Industries and Marginalised Areas Fund (Dimaf) and the progress on the Zambezi water scheme are all a vote-catching exercise. But it will happen because the project will have commenced under its contract before the elections,” Bloch told IPS.

More than 87 companies closed in Bulawayo in 2011. This prompted government to set up the 40- million-dollar fund that year. Dimaf is to help companies that have faced viability problems, including those that have closed down. However, it is mired in controversy as no company has benefited from the initiative.