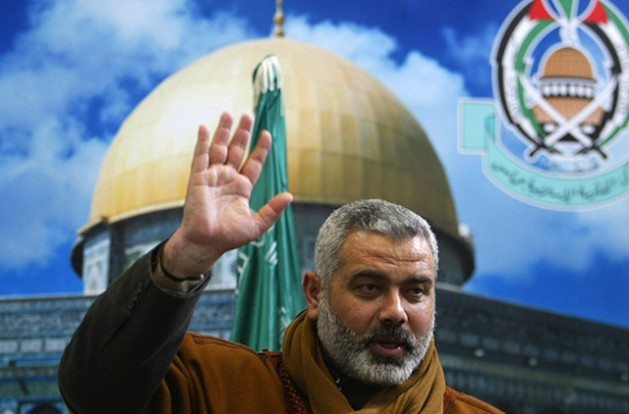 JERUSALEM, Nov 17 2012 (IPS) - Four days into Israel’s fierce assault on Hamas in Gaza, the ongoing operation looks on the surface a remake of the Gaza War of 2008-9 – with one unanswered distinction: whether it is aimed at completing what the previous onslaught didn’t achieve – the removal of the Palestinian Islamic movement from power once and for all.

Preparing to expand the operation, the Israeli army has drafted 16,000 reserve soldiers from infantry, engineering and armoured battalions, and from the Home Front command, and approved the call-up of 75,000 reservists. Four years ago, less than 10,000 reservists had been mobilised.

When it launched its operation dubbed ‘Pillar of Defence’ on Wednesday with the targeted assassination of Hamas’s military wing commander Ahmad Jabari and the destruction of most of Hamas’s long-range ‘Fajr’ rockets arsenal, Israel’s stated goal was somehow modest – to force Hamas into a long-term ceasefire that includes all Islamist factions, and thus ensure quiet on Israel’s south-western border.

But the means employed to achieve that goal are far from modest.

Israel’s Air Force and Navy have been pounding rocket launchers, bunkers, guerrilla positions and command centres in hundreds of attacks, 200 just on Friday night. On Saturday the Hamas headquarters were bombed.

Hundreds of rockets hit Israeli towns and villages in a 40-kilometre radius from Gaza, killing three civilians. In a first since the first Gulf War (1991), long-range rockets landed in the larger Tel Aviv metropolitan area, without causing damage.

“All signs suggest that Israel has set a relatively modest goal – a long-term truce,” Israeli defence analyst Ron Ben-Yishai wrote in the Israeli centrist daily Yedioth Ahronoth. Meanwhile, there’s no plausible sign that Hamas prepares to agree to such truce.

Though Israel still enjoyed relative freedom of action and Western support as at the start of operation ‘Cast Lead’ four years ago, one factor that might constrain the Israeli military is the risk of the current operation sliding into evermore disproportionate use of force and indiscriminate killing of Palestinian civilians.

The three-week war in 2008-9 resulted in the killing of 1,400 Palestinians, 300 of them under 18 years of age. Israel was subsequently accused of “war crimes” by the Goldstone inquiry commission in a report following the war.

Israel then argued that it had restored deterrence. In effect, periods of calm alternated with periods of tension. This year, with a total of 750 rockets launched on Israel by Palestinian guerrillas prior to the current escalation and tit-for-tat retaliation by Israel, lulls in hostilities were increasingly short-lived.

Yet, there’s an important consideration in Israel’s contingency plans for a ground attack – the Arab Spring that has radically changed the region and closed in on Israel’s northern and southern borders, hyping Israel’s prevalent feeling of insecurity.

Within one week, adding to the missile attack claimed by Hamas on an Israeli jeep – the ‘match’ that Israel says ignited the present conflict – in the north errant shells launched by the Syrian army against rebel positions landed on the Israeli-occupied Golan Heights.

The current offensive is thus also meant to test the reaction of Egypt, whose security cooperation is necessary for enforcing the 1979 peace treaty, and stability in Sinai and Gaza.

By recalling the Egyptian ambassador from Israel and appealing for U.S. and Arab League intervention, President Muhammad Mursi seemed to show his preference for diplomacy. On Friday, he dispatched Prime Minister Hesham Qandil on a brief solidarity visit to Gaza.

Israel’s ulterior motive behind the operation might be just that – not only to deliver a deterrent message to Hamas through Egypt, but to show the larger Arab world, including the Shia organisation Hezbollah in Lebanon, and beyond that, Iran, that Israel is still strong and strikes when feeling threatened.

By and large, the operation serves both foes’ interests. For instance, it serves Israel, partly because so long as the operation continues, Palestinian Authority President Mahmoud Abbas’s declared intention to have the U.N. General Assembly endorse Palestine as a non-member state is no pressing matter.

After having prevented more extreme Islamist factions from shelling Israel during four years of uneasy security ‘cooperation’ with Israel, Hamas can finally reposition itself at the vanguard of the resistance against the Israeli occupation.

Besides, Hamas’s non-compliance to an Israeli-imposed truce could constitute a deliberate tactic aimed at dragging the Israeli military into Gaza in a remake of the 2008-9 war, thereby hoping that Israel’s invasion will arouse international opprobrium.

In theory at least, Hamas’s brinkmanship could inadvertently achieve what the Gaza war didn’t achieve – its own removal from power once and for all after five years of rule, and replacement by Abbas’s Palestinian Authority.

But Hamas knows what Israel knows – expecting the Palestinian Authority to take control over the Strip under such conditions is improbable. And it’s also highly improbable that having withdrawn from it voluntarily in 2005, Israel would want to reoccupy the Gaza Strip.

Eventually, the tangible prospect of Netanyahu’s re-election in two months might have a moderating effect on the operation, even though placing security – neither peace nor social issues – high on the agenda of the election campaign serves the incumbent’s calculations.

After all, getting Israel entangled in Gaza for too long and too close to election date could risk spoiling his chances of remaining at the helm.

Yet, as long as Hamas refuses to agree to a meaningful truce with Israel, the operation will go on, with all the risks of a deeper confrontation that the continuation of the operation entails.