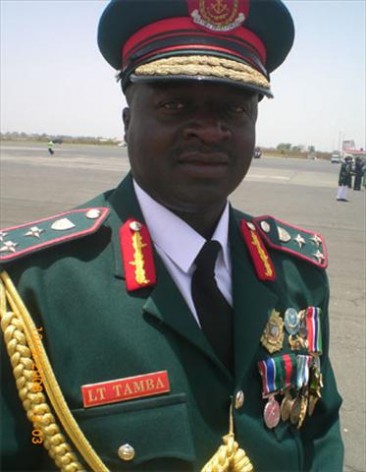 BANJUL, Dec 14 2012 (IPS) - The court of justice for the West African economic community is expected to hear a civil society case calling for the abolition of the death penalty in the Gambia this December, four months after the execution of nine prisoners shocked the world.

Civil Society Associations Gambia (CSAG), a consortium of pro-democracy movements, laid the case with the Economic Community of West African States (ECOWAS) Community Court of Justice, which has jurisdiction to rule on human rights breeches. The court is open to all persons in ECOWAS, of which the Gambia is a member.

The case is an attempt to save the lives of the country’s remaining 38 death row prisoners who include former defence and intelligence chiefs, former top army officers and a business tycoon.

But human rights experts in the Gambia are concerned about the court’s ability to hold this tiny West African nation to any ruling it makes. While the court’s decision is legally binding to member states, the Gambia has openly ignored previous rulings.

“The kind of solidarity we are seeing in the sub-region is a cause for comfort,” Banka Manneh, chairman of the CSAG, told IPS. “The case was scheduled for Oct. 31, but the sitting ended up not taking place. But it is already put on the calendar (for December) and the proceedings should start soon.”

Prominent Gambian human rights lawyer Ousainou Darboe told IPS: “I believe that it’s now time for the government to take steps to abolish the death penalty and to retroactively amend the current law so that all those on death row have their sentences commuted to prison terms.”

The civil society coalition also asked the ECOWAS court to order the Gambian government to hand over the bodies of the nine executed prisoners to their families “so that they can give them a decent burial and organise religious ceremonies which are necessary in such circumstances and are in accordance with local customs.”

The activists also requested a total of one million dollars be paid in compensation to the families of those executed.

Amadou Bah, a family member of one of the executed prisoners, told IPS that his family had not been officially informed of the application filed on their behalf. But he said he was thrilled by it. “Everyone has been talking ever since the execution, but no one wants to take action. The activists who sued the government have done a good job and they will have our support and prayers.”

Forty-seven prisoners had been on death row in crowded Gambian prisons prior to the Aug. 23 executions. Until then no one had been executed for nearly 30 years. This prompted the global human rights watchdog, Amnesty International, to classify the country as abolitionist in practice. But it was stripped of this status after the nine prisoners, eight men and one woman, were secretly executed.

President Yahya Jammeh’s administration justified its actions, saying that the execution was necessary to curb the rising crime rate. “And if I have to sign 10,000 death warrants to save the lives of 1.6 million Gambians, I will do it with pleasure,” Jammeh said following the executions.

Later, the Gambian government caved to mounting local and international pressure and declared a moratorium on the death penalty. But many refuse to take the country’s controversial president at his word.

Local newspapers report that the remaining 38 prisoners are living in constant fear of immediate execution.

The family members of those who remain on death row have been unable to access the prisons where their loved ones are held, and are not allowed to communicate with them. Amnesty International quoted the unnamed wife of one death row prisoner as saying: “We don’t know what’s happening – who is dead and who is alive. And we don’t know who will be next.”

Families of some of the remaining death row inmates are not convinced by Jammeh’s claim that executions will be halted. They are, however, somewhat relieved that the government is being challenged legally.

“When the president announced that he had stopped the executions, we were not convinced that he meant what he said. I was never convinced because, I’m afraid, he is not all that good at keeping promises,” a father of one death row inmate told IPS on condition of anonymity.

The 64-year-old man, whose son was convicted on charges of treason, was cautious in his hope that the sub-regional bloc would save his son’s life as the Gambia has a reputation for losing cases and not honouring the Abuja-based court’s decisions.

Over the past six years the court has handed down two judgments against the Gambian government – in the torture case of Musa Saidykhan and the unlawful detention case of Ebrima Manneh, both Gambian journalists.

The government had been found guilty of illegal detention and was ordered to release Manneh, who had been arrested by police in 2006 and was never seen again, and to pay 100,000 dollars in compensation to him. He has not reappeared, however, and there are suspicions that he is dead.

Saidykhan brought a lawsuit against the Gambian government to the court after he was arrested and tortured by Gambian security agents in 2006 and accused of involvement in an alleged coup attempt. He was awarded 200,000 dollars in damages, but Gambia has not paid him compensation.

However, the ECOWAS court seems to be running out of patience with countries that do not comply with its rulings.

“The non-implementation of the court’s decisions is a violation of member states’ obligation under the ECOWAS treaty,” Justice Awa Nana Daboya, the chairperson of the court, warned in July, calling for the sub-regional bloc to impose financial sanctions on non-complaint member states.

The bloc is facing increasing calls to take action against countries that disrespect its court. Darboe said it was time the Gambian government respected the court’s decisions.

“It is illegitimate for the Gambian government to accept to be bound by some decisions of ECOWAS and refuse to respect the decision of the court. Lately, I have been seeing a government-sponsored advert on the state broadcaster, advertising for VAT (value added tax) and relating it to an ECOWAS protocol. If we can implement VAT, why not respect and obey the court, which the Gambia has effectively participated in establishing?

“The next thing the ECOWAS heads of state should do is to take some punitive actions against states that decide to disregard the decision of the court. The court is not there for decoration, it is there for a purpose,” Darboe said.

CSAG chairman Banka Manneh said he hoped the Gambian government would honour a ruling against it.

“We hope that the government will comply this time around since this is a matter of life and death for so many. I use the word ‘hope’ since Jammeh has absolutely no respect for the rule of law and the Gambia’s international obligations,” he said.

The CSAG accused the country of being in violation of international human rights instruments, including the African Charter on Human and Peoples’ Rights. Also known as the Banjul Charter, it was drafted here in 1979 and calls for, among other things, respect for the right to life. The charter, which established the Organisation of African Unity, was ratified by all member states, including the Gambia.