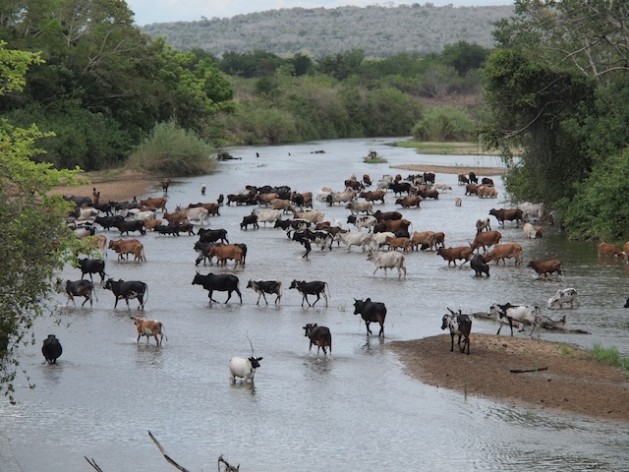 DAR ES SALAAM, Dec 19 2012 (IPS) - From January 2013, Tanzania will start restricting the size of land that single large-scale foreign and local investors can “lease” for agricultural use. The decision follows both local and international criticism that major investors are grabbing large chunks of land here, often displacing small-scale farmers and local communities.

The Permanent Secretary in the Prime Minister’s Office Peniel Lyimo confirmed that the government would limit the amount of land leased to investors in this East African nation. Previously, there were no limits.

“For a large-scale investor who wants to invest in sugar, the ceiling has been put at 10,000 hectares. (The limit for) rice is 5,000 hectares. The ceiling for sugar is significantly higher due to the fact that it may also produce electric power,” Lyimo told IPS. Sugarcane fibre is used in the generation of electricity.

According to official documents, seen by IPS, from the Tanzania Investment Centre, a government agency set up to promote and facilitate investment: “Even within a seven-year period, an investor would not be able to use more than 10,000 hectares…”

The move will come as a relief to land rights organisations that have continually called for the government to curb the land grabs here.

In 2008 the Tanzanian government launched the Kilimo Kwanza (Agriculture First) initiative in order to increase private sector investments in agriculture.

And when the World Economic Forum took place in Dar es Salaam in 2010, the Southern Agricultural Growth Corridor of Tanzania (SAGCOT), a multi-stakeholder partnership to rapidly develop the country’s agricultural potential, was formed and the government began to invite foreign companies to invest in crops like sugarcane, maize, rice and cassava.

However, civil society organisations like the Tanzanian NGO Land Rights Research and Resources Institute (LARRRI) and the Oakland Institute, an independent policy think tank in the United States, called on the government to review its investment policy to limit the amount of land given to foreign investors.

To date, he told IPS, the government has given 80,000 hectares of land to large-scale investors.

In Tanzania’s northern Loliondo district, which is known for its wildlife, much of the land has been leased out to international hunting concessions, which has resulted in the large-scale eviction of the local population – although the government refutes this.  A major U.S. energy company, AgriSol Energy, has also been accused of engaging in land grabs in Tanzania that would displace more than 160,000 Burundian refugees, according to a report by the Oakland Institute. The report states that AgriSol is benefiting from the forcible eviction of the refugees, many of whom are subsistence farmers, and leasing the land — as much as 800,000 acres — from the Tanzanian government for 25 cents per acre.

Myenzi said that of the 1,825 general land disputes reported in 2011, 1,095 involved powerful investors.

“The country has unbearable land (disputes). This calls for concrete remedial actions. Government actions currently focus on large-scale farming, but there should be a clear plan on how they can coexist with the small-scale farmers who are in the majority,” he said.

According to Tanzania’s Ministry for Agriculture, Food Security and Cooperatives, small-scale farmers produce over 90 percent of the country’s food.

“Only a few own huge land resources (in Tanzania). What is happening now is that the well-to-do from within and outside the country are in a land-grabbing race,” Myenzi said.

Damian Gabagambi, an agricultural economist at Sokoine University of Agriculture, the largest agricultural university in Tanzania, said that major investors should provide for the inflow of technological solutions and the creation of markets for small-scale farmers.

“While we encourage large-scale investors in the agricultural sector, Tanzania must limit the amount of land they can acquire, so that they rely on small-holder farmers for most of their supplies. Small-scale traders are more important for the country’s food security,” Gabagambi told IPS.

Tanzania has an estimated population of 42 million people and 12,000 villages, but only 0.02 percent of its citizens have traditional land ownership titles.

Advocate Harold Sungusia from the Legal and Human Rights Centre told IPS that in order for the government to control conflicts with investors over land, it should create an equitable balance between the interests of its people and those of investors.

He said the role of state machinery such as laws, institutions and resources have changed from protecting the majority of smallholders interests in the 1970s and 1980s, to facilitating the acquisition of land from communities by a few elite and foreign companies.

“In Tanzania from 2001 to date, the land laws have been changed eight times, for whose interest?”

However, director general Aloyce Masanja of the Rufiji Basin Development Authority, a government organisation that manages the 183,000 square kilometre basin, issues water permits to both large-scale and smallholder farmers along the basin area, and mediates in conflicts, said the government largely depends on the private sector to make SAGCOT a success.

“Land is given out to a private investor after careful evaluation. The private sector can perform better… it has strong links with other areas of economic activities that are linked to agricultural development,” he told IPS.