WASHINGTON, Sep 6 2012 (IPS) - Environment groups are accusing a New York-based agricultural company, Herakles Farms, of going forward with plans for a 73,000-hectare palm-oil plantation and refinery in southwest Cameroon despite a lack of government authorisation, two court injunctions, and in the face of significant community opposition. 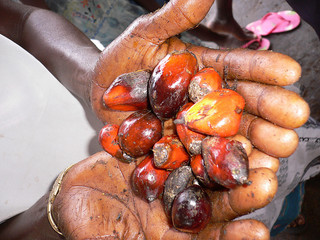 Because Cameroon is a major new palm-oil producer, many worry that what happens with the Herakles deal could set a precedent for the entire continent. Credit: One Villiage Initiative/CC by 2.0

On Wednesday, the Oakland Institute and Greenpeace, two environment watchdogs based here in the United States, released a report suggesting that the project, situated in what is described as a biodiversity hotspot between four major conservation zones, could negatively impact up to 45,000 people.

The groups warn that the project, which is linked to the Blackstone Group, a massive investment group, represents the vanguard of a new “scramble for land” in Africa by Western companies.

“Herakles claims to be engaged in improving Cameroon’s food security and humanitarian situation, but we have found this to be a total fraud. In fact, they are about to destroy the livelihoods of thousands,” Frederic Mousseau, the report’s author, said in a media call Wednesday.

“Likewise, Herakles claims local support, but we found this to be a blatant lie. Finally, the claim that this land is secondary forest and degraded is misleading. In fact, large portions have never even been logged.” (By deadline, Herakles officials had not responded to requests for comment.)

The project, overseen by a Herakles subsidiary called SG Sustainable Oils Cameroon (SGSOC), is still at an early stage, currently consisting of three large nurseries. “We are now waiting for an official decision by the Cameroon government to proceed beyond these nurseries,” Mousseau says. “So this is an important moment – the project can still be stopped.”

The backlash against SGSOC took on new energy over the past week, following the Aug. 24 notification that Herakles was removing the project from formal compliance with a set of eco-friendly industry guidelines called the Roundtable on Sustainable Palm Oil (RSPO).

In explaining the move, Herakles, which describes itself as “committed to addressing the complex issues of food security through sustainable agriculture initiatives”, cited the length of time its RSPO application had been pending, while noting that it was “addressing a dire humanitarian need” in Cameroon.

The legality of the project’s nurseries has already been called into question. Although SGSOC did sign a 99-year agreement with the government in 2009, Cameroonian law requires that the use of such large tracts of land have direct presidential consent.

Given that such a decree has yet to be given, activists suggest that SGSOC had no legal basis on which to start bulldozing the forestland and cocoa and vegetable farms on which local communities depended.

A local judge has filed two injunctions against the company’s actions, but according to local observers the company has refused to comply.

“Not only do they not want to comply with existing law, but the company has clearly turned its back on sustainable practices,” says Samuel Nguiffo, a lawyer and director of the Center for Environment and Development, in Cameroon’s capital, Yaounde. “The government structure in our country is very weak, so we’re asking the U.S. to stop the company.”

Herakles officials do say they have received community support for the project, but eyewitness accounts suggest that this is patchy at best.

“When the company came here, they said that this project had (already) been authorised by the president of Cameroon … So we just kept quiet,” Edward Ndomo, the chair of the local traditional council, told Oakland Institute researchers for a new documentary. “We never had any full meetings with the company.”

Marie Meboka Boya, a member of Parliament representing the area in which the nurseries have been built, told researchers that she thinks the company has taken a “buy-off approach”, offering small amounts of money or food in return for some local backing.

“From the reaction of the community and the dodgy attitude of the company,” she says, “I know that there is no proper agreement.”

The Herakles project is one of a large number of new foreign-invested land deals in Africa. And despite its significant size, it is not the largest – in Congo, for instance, a deal of a million hectares have been discussed.

“There are so many Europeans and Americans looking for new land in Africa right now, we’re worried that a land-rush may be imminent,” Greenpeace’s Rolf Skar says.

Because Cameroon is a major new palm-oil producer, many are now suggesting that what happens with the Herakles deal could set a precedent for the entire continent.

“If we confirm the bad deal we have now, all the companies coming in will have as bad a deal as Herakles,” says Nguiffo. “Cameroon and neighbouring countries are currently experiencing a huge demand for land, and land grabs at this scale are very new for us – it’s frightening.”

Nguiffo says that while Cameroon currently has about 500,000 hectares of land under plantation, mostly on old farms, over the past three years demand for land has shot up to nearly three million hectares, driven by foreign investors backed by pressure from foreign governments and multilateral lenders.

“Donors and international financial institutions have increasingly been asking African countries to open up their economies, despite the fact that in most of these countries there is very little rule of law,” says Anuradha Mittal, the executive director of the Oakland Institute, which in recent years has researched about 70 of the new industrial-scale land deals.

Almost all of these deals, she says, are marked by a lack of both transparency and local involvement, as well as an absence of the many benefits promised to local and national economies – jobs, growth in gross domestic product, the construction of new clinics or water sources for local communities.

“There have also been a lot of myths around who the investors are,” she says. “It’s not just the Chinese or Indians or the Gulf states. The number of investors from Europe and U.S. is huge, including private equity and hedge funds, all looking for opportunities in the next soft commodity.”

Still, certain oversight trends have changed in recent years, as consumers become increasingly aware of labour and environment issues around the world.

“A company has to sell its product somewhere, and these practices are in direct contrast to other producers and buyers – Kraft, Nestle, Unilever – which are asking for much higher standards for the palm oil they purchase,” Greenpeace’s Skar says. “Herakles is falling off the cart on this issue and will have to answer to its shareholders as to why.”

For many advocates, the issue comes down to the type of development that the international community is pushing.

“Today the big push is to get rid of the millions of smallholder farmers in Cameroon, to transform them into low-paid labourers on large farms,” Greenpeace’s Mousseau says.

“In today’s development discussion we’re told this is necessary, and we give legal and fiscal exemptions to investors. But we don’t actually see any development resulting from investments – what we see is exploitation of human and natural resources.”