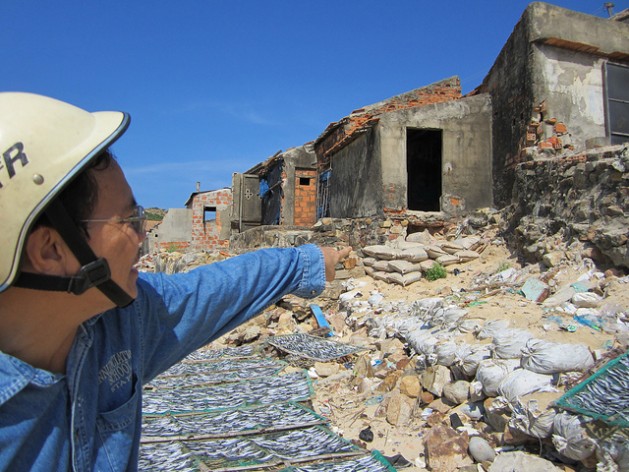 DOHA, Qatar, Dec 10 2012 (IPS) - The United Nations climate talks in Doha went a full extra 24 hours and ended without increased cuts in fossil fuel emissions and without financial commitments between 2013 and 2015.

“Governments came here with no mandate for action,” Smith said in a press scrum moments after the meeting known as COP 18 ended and the 195 parties to the U.N. Framework Convention on Climate Change (UNFCCC) approved a complex package called “The Doha Climate Gateway”.

The Doha Gateway creates a second phase of the Kyoto Protocol to cut fossil fuel emissions by industrialised nations from 2013 to 2020 but does not set new targets. There is also no financial support to help poor countries adapt to impacts of climate change – only agreement for more meetings in 2013. Talks will also begin next year to create a “mechanism” to assess damages and costs for countries suffering losses from climate change.

Finally, the Doha Climate Gateway has an agreed outline for two years of negotiations on a new global climate treaty that would go into legal force in 2020.

“It is impossible to get everyone here to smile….I too am disappointed,” said Qatar’s Abdullah bin Hamad Al-Attiyah, the COP18 president. Al-Attiyah told Tierramérica * he was surprised countries wanted to make so many changes throughout the two weeks and right up to the final hours.

However, this is a “historic” agreement, Al-Attiyah insisted.

Doha will do nothing to cut emissions that are taking the world to four degrees and more of warming. It offers little in terms of finance to help poor countries cope with climate change, Smith said.

Smith singled out the U.S. and Canada for blocking progress on keys issues. Canada was one of the worst, she said. While profiting from its massive oil sands operations, it was “super-obstructive on finance”.

The loss and damage debate was among the most intense during closed meetings, featuring the U.S pitted against island states like the Philippines that are badly impacted by stronger cyclones and sea level rise. The U.S. delegates blocked all references that implied compensation or liability, openly admitting they feared a political backlash at home, according to an anonymous source.

“Loss and damage is huge issue for Central America. We are highly vulnerable to the impacts of climate change,” said Mónica López Baltodano, of Centro Humboldt Nicaragua, an environmental NGO.

“Honduras and Nicaragua are the number one and number three most vulnerable countries in the world according to the Climate Risk Index,” Baltodano told Tierramérica here in Doha.

The Germanwatch Global Climate Risk Index was released here a few days ago. It said those two countries have been the most affected in terms of lost lives and damages over the past 20 years. In 2011, Thailand, Cambodia, Pakistan and El Salvador were the worst affected by extreme weather events in 2011.

In 2010, at COP 16 in Cancun, there was agreement to find ways to assess and reduce losses and damages from impacts of climate change, including extreme weather events and slow onset events like sea level rise, ocean acidification, loss of biodiversity and desertification.

Developing countries wanted a new institution and framework to deal with loss and damage, but the U.S. was opposed to any new institution. The compromise is for a “new mechanism” to be created in 2013.

A new second phase of the Kyoto Protocol will run from 2013 to 2020. Getting this second phase or commitment is considered very important by developing countries because it has hard-won legal terms that commit countries to making cuts as well as methods for measuring and verifying emission levels.

However, only the European Union, Australia and a few other countries are involved, representing just 12 percent of global emissions. The U.S. has never participated, while Canada and Japan have opted out of the second phase.

None of those in the second Kyoto phase increased their emission cuts pledges. They did agree to a mandatory review of their reduction targets in 2014. Rich countries outside of Kyoto promised to make comparable cuts but offered nothing new here in Doha.

Countries are mainly influenced by the corporate sector and civil society has very little interaction or influence there, she said. “There is a huge space we don’t reach.”

The Doha outcome puts the world on track for three, four or even five degrees of warming, said the delegate from the South Pacific island nation of Nauru who represents the Alliance of Small Island States in the final plenary.

“We’re not talking about how comfortable your people (in developed world) may live but whether our people live,” the delegate said. “The lives of our people are on the line here.”