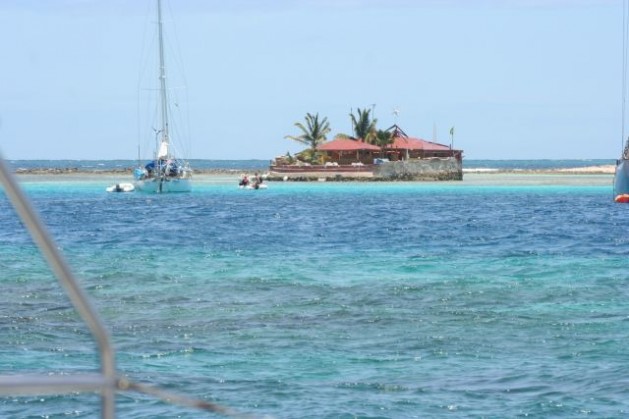 Rising seas pose a major threat to businesses like this bar located in waters near the Tobago Keys in St. Vincent and the Grenadines. Credit: Peter Richards

PORT OF SPAIN, Trinidad, Dec 17 2012 (IPS) - As the world’s most tourism-dependent region, with the sector accounting for one in every eight jobs, the Caribbean has much to fear from climate change.

Three years ago, the Belize-based Caribbean Community Climate Change Centre (CCCCC) signed a 1.8-million-dollar agreement with the Inter-American Development Bank (IDB) to enhance climate resilience in the tourism sector, and work towards designating the Caribbean a carbon neutral destination.

Programme coordinator Earl Green told IPS said that the project’s main outcome is the development of a web-based carbon footprinting tool, which provides a common platform for development of tourism sector greenhouse gas (GHG) inventories in the region.

“GHG inventories allow for baseline and future scenarios, which may be used for cross-country comparisons, (and) also represent a key step in planning for low carbon development in the tourism sector across the region,” he said.

The programme was piloted in four countries – The Bahamas, Trinidad and Tobago, Belize and Guyana – that the CCCCC said were chosen because of the strong support from the tourism industries in these countries and also the diversity of their product, including cruises in the Bahamas, scuba diving in Belize, small-scale ecotourism and cultural tourism in Guyana, and resorts in Tobago.

“The pilot project was very successful. We had an exit meeting with the IDB on Monday. It offers lessons for future efforts in more complex tourism markets such as Jamaica and Barbados and for whole island responses as in the case of The Bahamas,” CCCCC’s communication specialist Tyrone Hall told IPS.

“As part of the ongoing mitigation and adaptation thrust undertaken by the Centre, we sought to reduce the carbon footprint of this key economic sector. This included installing motion sensors in hotels to ensure that once they are not occupied utilities aren’t being used, retrofitting buildings to ensure efficiency of things like A/C units and so forth,” he added.

The firm retained by the CCCCC to undertake a consultancy under the Caribbean Carbon Neutral Tourism Program (CCNTP) in its report noted that the identification of mitigation options involved extensive discussions with stakeholders in the tourism sector.

“These discussions have pointed to capacity building as one of the most important GHG mitigation measures for the Caribbean, as ‘knowledge is power’. Stakeholders with the knowledge of carbon accounting and the principles of low carbon tourism/economies are better able to identify approaches to reduce GHGs within the own operations,” Dillon Consulting Limited noted.

The agreement with the IDB called for the development of suitable financing mechanisms, which would be needed to support investments in adaptation and mitigation measures within the tourism sector in order to facilitate climate resilience and carbon neutrality.

It also called for the development of a strategic framework to access the Climate Investment Funds -Strategic Climate Fund (SCF) under its Pilot Program for Climate Resilience (PPCR), that would attract concessional financial options, including concessional loans, guarantees, grants, and equity enhancements that can be used by the region’s tourism sector for investing in climate resilient infrastructure and services.

“Determining the right mix of policy financing instruments will be crucial and a full range of options should be considered,” he said.

“Much of these mechanisms are most appropriate for large-scale projects, while smaller projects and discreet pilot programme often require one or two funding sources,” Green added.

The CCNTP programme was also piloted in the four Caribbean countries because the CCCCC said it felt there was need to take advantage of the results of the Review of the Economics of Climate Change Studies (RECCS) coordinated by the United Nations Economic Commission for Latin America and the Caribbean (UN-ECLAC).

“With the web-based tool, the pilot countries can now log-in and view their greenhouse gas emissions and even forecast what it will be in the future. The real benefit of the tool is that these countries can now map the carbon footprint of their tourism sector and even compare their performance to other islands,” said Hall.

He told IPS that “once that happens, it opens up opportunities for knowledge transfer and so forth. This tool will be useful for decision-making and planning on a regional and national level as we seek to improve the sector and strengthen other parts of the economy”.

The consulting firm in its report noted that energy efficiency and deployment of renewable energy in the Caribbean accommodation sub-sector are significant sources of potential GHG reductions, and ongoing work in this field has the potential to significantly contribute to the development of low carbon tourism in the Caribbean.