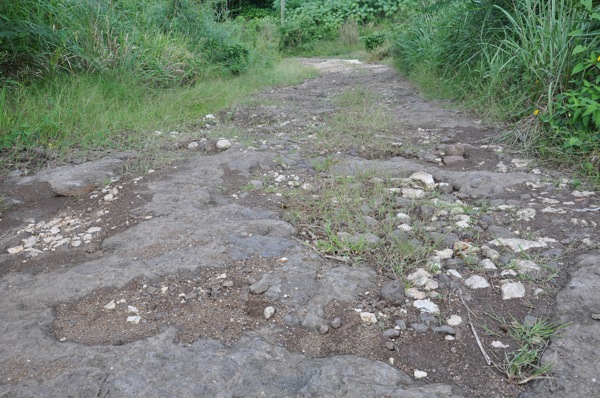 The road linking Sweetes Village to Bendals Village in Antigua was washed out during Hurricanes Earl and Omar. Credit: Desmond Brown/IPS

ST. JOHN'S, Antigua, Dec 4 2012 (IPS) - Tourism-dependent Antigua may have been spared the ravages of superstorm Sandy, but the island is nevertheless feeling its effects on environmental, political and economic fronts.

The country is preparing for a drop in visitors from the United States, a key source of tourists for Antigua. Tourism Minister John Maginley pointed to the importance of the northeastern states of New York, New Jersey and Connecticut, which were hit hard by Hurricane Sandy and which he called “the destination’s largest source market in the United States”.

University of the West Indies (UWI) Professor Norman Girvan has suggested that the economic impact of Sandy could be as bad as that of the terrorist attacks in the United States on Sep. 11, 2001. “We will see a downturn…from now until January and February,” he said. “I think the initial impact will possibly be as great as 9/11, but in terms of the long-term effects it is too early to tell.”

Local officials say Sandy, which brushed Antigua as a tropical storm, has served as a wake-up call for the country, blowing the topic of climate change back to front and center.

“Events like Hurricane Sandy tend to bring our focus back,” Diane Black-Layne, chief environmental officer in the environmental division of the government of Antigua and Barbuda, told IPS. “There are a range of adaptation measures that have to take place.”

“We now have to adjust to a new world or to a new norm…every single country will experience extremes in weather fluctuations at a frequency that is unprecedented,” she added. Although many remain skeptical about climate change, Black-Layne said she was pleased to see that the Antigua and Barbuda government is taking steps to prepare the island.

“If you think you can go to a minister and the minister would tell you, ‘Yes, build whatever you want, wherever you want,'” she warned, “the sea will come and take away your building or insurance companies will not insure you.”

In July, Agriculture Minister Hilson Baptiste announced that the government intended to join with the Nature Conservancy, a global climate change organisation, to take advantage of its debt-for-climate-adaptation swap. The body is expected to pay off Antigua and Barbuda’s debt of 18 million U.S. dollars to Brazil in exchange for the country’s involvement in coastal zone management.

The government has until the end of 2012 to put its proposal in writing and submit it to the Nature Conservancy.

Brian Cooper, a British scientist who moved to Antigua in 1986, told IPS he has been observing stronger rainfall and other signs of a changing climate on the island over the past few years.

“Certainly we’ve witnessed a renewed intensity and frequency of storms. We have seen what I think has been quite a departure from what we’ve experienced before, that many of the storms have very far-flung rain bands which are often a great distance from the centre of the storm,” he said.

“In the case of [Hurricane] Omar in 2008 we didn’t feel anything much of it until after it had passed… [when] we we got this rain band ,which didn’t last very long but it dumped a tremendous amount of rain in the south of the island. There was tremendous flooding in the Body Ponds Valley and Bendals Village was cut off for a while because water was flowing over the bridge going into Bendals by several feet.”

“We had the same thing with [Hurricane] Earl in 2010, a tremendous burst of rain that had similar effects,” Cooper added.

A local resident, Winston Derrick, now in his sixties, pointed to the destruction of a road, which he said had existed since his childhood, as clear evidence of the effects of climate change. Just days ago, he tried to drive from Sweetes Village to Bendals Village but could not, he said. “The road has become impassable. It’s all washed out.”

Cooper said a combination of Earl and Omar washed out the road, with which he too is familiar.

“That is the result of some of the torrential rainfall that we have been having particularly in the southwest part of the island. I’ve been living in Sweetes for about 10 years and I used to drive down that road and I can’t drive there now,” he said.

But despite all the evidence, Dr. Cooper said people are still not taking climate change as seriously as they should.

“Most of it is too far away,” he said. “I think when we had that series of hurricanes people were beginning to think, ‘Okay, what’s happening?’ But it is also difficult for…scientists to pick up changes that happen over a long period of time,” he told IPS.

Black-Layne disagreed. “It is frightening when you have to listen to the science and the projections,” she said, especially when one has children who will be affected by these changes. “To some extent you are saddened by the slow pace in which the world is reacting,” she added. “It’s terrifying what is happening and what is going to happen.”

Yet Black-Layne still believed Antigua and Barbuda and other Caribbean countries can draw positive lessons from the effects of climate change.

“We have to make national policy decisions and legislative decisions to make sure that from this terrible thing we will benefit from it in the end, or [that] we can come out as close to the top as possible,” she concluded.