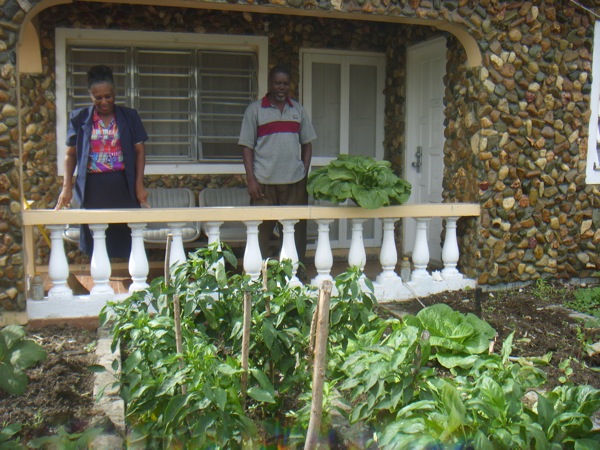 A couple looks at their backyard garden in the Cassada Gardens community in St. John's, Antigua. Credit: Desmond Brown/IPS

ST. JOHN'S, Antigua, Jun 18 2012 (IPS) - As a boy, Hilson Baptiste remembers going to his neighbour’s home and giving them a large slice of pumpkin grown in his family’s backyard garden. In return, he would be given two fish for his family.

But Baptiste, who is currently Antigua’s minister of agriculture, regrets that in his country, those days are over. He is now part of an initiative to prevent the island from spending millions of dollars on importing food that could easily be grown, in some cases, in the backyards of many homes.

In 2010, the twin-island nation imported approximately 16 million pounds of vegetables, according to figures from the Antigua and Barbuda government. Baptiste said serious measures must be taken to drastically reduce that figure.

“I want to see that happen. You would not have to buy anything from the supermarket; you can grow your own and share with your neighbours,” he said. He related his boyhood story of exchanging pumpkin for fish, noting, “We build better communities when we do this.”

Even the island’s ceremonial head of state, Dame Louise Lake-Tack, is supporting the initiative. The representative of Queen Elizabeth in Antigua and Barbuda, she has no problem getting her hands dirty as she seeks to boost food production in the country.

To ensure that the 80,000 inhabitants of this small two-island state understand the need to drastically reduce the millions of dollars spent on importing food, Lake-Tack assisted the government by distributing seedlings to homeowners, a move authorities hope will address the issue of food security here.

Known as the National Backyard Gardening Programme, the ministry of agriculture-led initiative is aiming at getting the population to produce four million pounds of food annually in their own backyards.

“We encourage people to grow all types of vegetables and even fruits,” Owolabi Elabanjo, an agriculture extension officer, told IPS.

“We’ve seen a rise in (the) production of tomato, sweet pepper, okra, lettuce and seasoning like rosemary and thyme. We are also now introducing vegetables that (are not) common in many homes.”

The programme initially began with the help of the Rome-based Food and Agriculture Organisation (FAO) in 2008 and now, approximately 2,500 families are registered.

FAO’s sub-regional coordinator for the Caribbean, Florita Kentish, said the FAO is a firm believer in activities to alleviate the effects of rising food prices and global economic hardship, and to ensure that even the most vulnerable have good nutrition.

“Home gardening has a long established tradition of offering great potential to improve household food security and alleviate micronutrient deficiencies in many ways,” Kentish said. The FAO and the World Health Organisation are jointly involved in the initiative to improve nutrition.

Home gardening can help achieve such goals by offering direct access to a diversity of foods rich in nutrients. It also helps people save money by spending less on food and earn extra income by selling garden produce, ultimately increasing their purchasing power. During seasonally lean periods, home gardens can serve as an additional source of food.

The initiative is especially important in rural areas where income-earning opportunities are fewer, Kentish said, adding that it is becoming increasingly important for vulnerable households, including those headed by females.

The government is taking steps to better support the initiative, which has been extended to some of the nation’s schools, Baptiste said.

“We are zoning Antigua off into three or four zones to focus on each zone once per month to ensure that we assist you to better supply yourself and your family with all the vegetables you need,” he told those registered under the programme.

In the month of May alone the ministry distributed more than 15,000 seedlings – among them tomatoes, butternut squash, zucchini, peppers and an assortment of fruit trees – to families.

But despite such drive and commitment to the programme, Elabanjo said Antigua and Barbuda was at a disadvantage in terms of agricultural production, especially when climate change is factored into an already precarious environment.

Even before climate change became an issue, Antigua and Barbuda lacked an adequate water supply, Elabanjo told IPS. “All of the other islands can use free water (from streams and rivers) for production of food but an average farmer in Antigua has to pay for water.” Higher temperatures brought by climate change have exacerbated the problem.

Elabanjo, a Nigerian farmer who moved to Antigua 20 years ago, explained that during the summer, an entire month can pass without any rainfall.

“Antigua is one of the few islands where we don’t have good rainfall. The conditions are semi-arid, so we have one of the lowest rainfalls in all of the Caribbean islands and above all, we don’t have a single river in Antigua,” he said.

“But when you go to St. Vincent, Dominica, St. Lucia…everybody has an abundance of water,” which is critical for agriculture, he pointed out. He praised the nation’s farmers for managing to grow produce despite the environmental constraints.

“Right now, as the hurricane season is here, you will see some farmers reducing their production because they are not sure if a hurricane will come and destroy their crops,” Elabanjo said.

Without insurance, farmers have no protection, he added. “Rather than losing money they tend to cut back, and by cutting back they affect supply.”

Finance Minister Harold Lovell welcomed the initiative, noting that several years ago, society had turned its back on agriculture. But the resultant importation of foods and vegetables came at a high cost to the country.

“Even if we do not produce everything that we eat, we should produce substantially what we eat, and we should also eat what we produce,” Lovell said.

In Antigua and other Caribbean countries with a strong tradition of agriculture, most impoverished people buy their food. In Antigua’s case, Elabanjo said, the majority of it is imported.

“Our environment is not conducive (to) the production of certain crops so most of the produce you see in the market or the supermarket is imported from neighbouring islands of Dominica or St. Vincent,” he said.

But if the backyard gardening initiative – which boasts a range of participants, from the impoverished to those who are working professionals – works, the future might soon look different for Antigua and Barbuda.