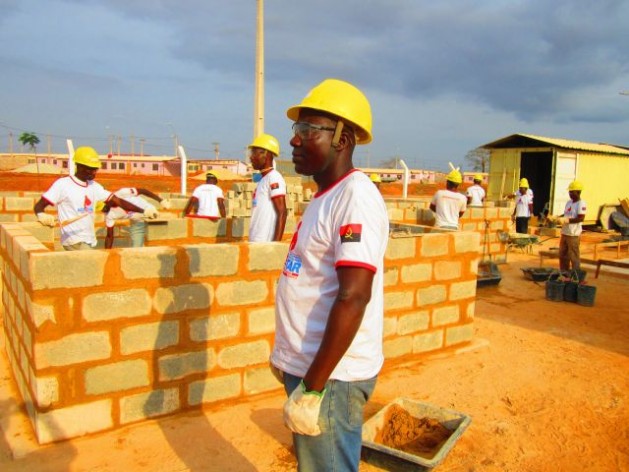 LUANDA, Jan 30 2013 (IPS) - Brazil has turned to large infrastructure as a unique way to globally expand its economy and build up its political influence, with the added bonus of furthering the development of small nations. But this strategy is not without its risks.

Angola, which has been a major focus of Brazil’s transnational construction companies, faces the economic challenges typical of a young nation dependent on revenue from oil exports and with high levels of corruption, in a context where the line between public and private interests is hazy.

An example that serves to illustrate this blurring of the lines is Companhia de Bioenergia de Angola (BIOCOM), a local biofuel company that is preparing to produce sugar, ethanol and electricity to meet domestic consumption needs.

To implement this project, which includes 32,000 hectares of sugarcane crops and the construction of an industrial plant, the Brazilian giant Odebrecht partnered up with the country’s state oil company Sonangol and the private Angolan company Damer Indústria.

Damer was founded in 2007, on the eve of BIOCOM’S inception, by then Sonangol Head Director Manuel Domingos Vicente and two generals, Manuel Helder Vieira Dias, chief of the presidential military department, and Leopoldino Fragoso, a top presidential adviser.

Vicente, now vice president of Angola, has joint investments with the two generals in the oil industry, real estate and a range of other fields. These are the most visible examples of the state’s role as an incubator for business operators and the “national bourgeoisie” that is emerging from it.

Almost everything in Angola is dependant on the government. Lands are state-owned and all business ventures begin with a government concession for the necessary plot or facilities. Sonangol has partnered up with countless companies, investing its vast oil income.

The government’s nepotism and favouritism are no secret, but these practices find little active opposition in a scantly organised civil society. “Even God, when looking for a saviour for mankind, chose his own son,” is how Angolans humorously explain the wealth amassed by government and military officials and their relatives.

Odebrecht's training programmes have enabled many locals to improve their lot.

Justino Amaro, the first local to be represented on Odebrecht Angola's board of directors and is now head of institutional relations, almost left the company, after agreeing in 1989 to relocate to the Capanda jungle, which entailed abandoning the comforts of Luanda and exposing himself to the dangers of the long civil war (1975-2002) that interrupted the power plant's construction several times and delayed its completion for more than 17 years.

His boss talked him out of resigning with the promise of promotion. With the company's support, Amaro continued his professional training, earning a degree in economics through distance learning and attending courses in Brazil, and was able to move up rapidly in the ranks.

With seven children from his wife and another six fathered in distant provinces where he fought in the war, 54-year-old José Simão describes his life in the past as just "fighting and making babies”.

In October he took a short masonry course at the Acreditar Luanda unit, which includes three classrooms, a laboratory and a library, and is located in Zango, one of the neighbourhoods that is part of the Population Resettlement Programme, a government initiative implemented by Odebrecht to relocate families displaced by urban redevelopment or unsafe housing.

Simão was already working as a bricklayer, building houses on his own, but with the Acreditar course he acquired new skills. "You learn a lot in 18 days. Not just bricklaying. You also learn about health and safety at work and about the working environment," he said.

Now he is turning to the state to demand a job. "We served the government as soldiers for many years," he argued, adding his voice to dozens of demobilised combatants who Acreditar is helping re-enter the labour market.

Journalist Rafael Marques de Moraes heads an anti-corruption organisation that regularly posts reports online denouncing serious cases of corruption, many of them well-documented, but so far these reports have failed to trigger public scandals, as might be expected in any other country.

Odebrecht moves in this context, occupying a privileged position as a government contractor and partner due to its role in the implementation of strategic power generation, water supply and road construction works, services that are sorely needed by the population. After 28 years of operating in the country, it has not only become a leader in infrastructure works, it is also a major investor in a wide range of industries, raking in multi-million-dollar profits that are not made public.

The group boosted its visibility through its involvement in the Nosso Super supermarket chain – present nationwide with 29 stores and the crown jewel of Luanda’s commerce – and the Belas Shopping mall, and through its participation in the capital’s urban redevelopment, which includes upgrading slums, expanding avenues and constructing basic sanitation works.

Its policy of employing and training local labour further increases the company’s influence in the construction sector. While this is the same strategy that Odebrecht applies in all 35 countries where it operates, it is of particular importance in Angola, as the lack of skilled workers is hindering the country’s development despite the oil boom.

Odebrecht is currently the country’s largest private employer, with some 20,000 workers hired directly. Ninety-three percent of its work force is made up of Angolans.

Odebrecht’s first work in Angola – the Capanda hydroelectric power plant – served “as a school to train an elite” group of technicians, who are currently holding senior positions in the government and in business, says Justino Amaro, the first Angolan to sit in Odebrecht Angola’s board of directors.

Training workers is an essential part of every project implemented by Odebrecht. As of mid 2012, 79,000 Angolans had benefited from the company’s training programmes. University student recruits receive special training and are groomed to occupy senior positions in the company.

In major projects, Odebrecht also offers technical training for the population living in the surrounding areas, preparing any interested young people – not just potential employees – for construction jobs. These technical courses are provided through the company’s Acreditar programme, which so far has trained some 3,000 workers in its three Angola units.

Odebrecht’s corporate social responsibility actions, which include providing poor communities with running water, schools, electricity and recreational opportunities, bolster the cooperation-for-development image projected by the company through its construction activities.

This is especially valuable in Angola, a country that is still being built after 37 years of independent life, and which is undergoing a process of post-war reconstruction.

But, above all, Angola has been a very lucrative business for Odebrecht, helping it become one of Brazil’s leading companies and the most globalised. In this sense, a common complaint among well-informed Angolans is the high cost of Odebrecht’s works.

Other Brazilian construction companies, such as Andrade Gutierrez, Camargo Correa and Queiroz Galvão, are also seizing the business opportunities afforded by the Angolan market.

Brazil’s strong presence in the country is not strictly private. The large projects implemented by these companies are supported by loans from Brazil’s state-owned development bank (BNDES), which finances the exporting of inputs and services necessary for such works.

In 2008 this contributed to making Angola the leading African importer of Brazilian goods, above the more populous South Africa and Nigeria, both of which have larger economies. But in 2010, imports plummeted to half their 2008 level, recovering only slightly over the following years.

Such are the risks of operating in an economy dependent on fluctuating oil prices and with high costs of living and production due to the energy boom. Its currency tends to be overvalued and that makes national products more expensive and imported goods cheaper.

The Angolan government fosters national production to substitute for imports, which are inundating the domestic market. BIOCOM is part of that effort, as is the Special Economic Area established some 30 kilometres from Luanda, with 73 industrial plants and an initial infrastructure built by Odebrecht.

However, greater market liberalisation could thwart many agricultural and industrial ventures. Which is why Angola rejects the free trade agreement proposed by the Southern African Development Community (SADC), of which it is a member, along with 13 other countries.

A free trade agreement could bring changes not only to the economy but also to government, and that poses a risk for projects tied to current government officials whose decisions may be questioned in the future. While for the time being dos Santos’ 33-year regime seems unshakable, industrial projects like BIOCOM’s are very long-term ventures.