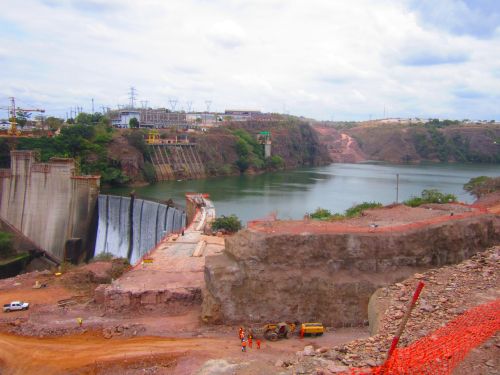 Cambambe dam and reservoir on the Kwanza river, to be raised another 30 metres. Credit: Mario Osava/IPS

CAMBAMBE, Angola , Dec 10 2012 (IPS) - The Kwanza river in the heart of Angola will be a symbol of Brazilian partnership in African development when power stations along the country’s main source of water are fully operational.

Nine hydroelectric plants and water treatment stations will endeavour to supply the most urgent needs of the metropolitan area of Luanda, and to extend the electricity supply at least to the centre-north of Angola. The process will take more than a decade.

Supplying clean water to 90 percent of the residents of Luanda will take until 2025, according to the master plan. The difficulty is to keep up with the growth of the population in the capital, which is projected to reach 13 million people by then, around twice the present number.

The Cambambe hydropower plant benefits from the Kwanza river’s location in the centre and north of the country, but it also reflects Angola’s misfortunes. Only now, five decades after the first phase was completed, is the complex about to become fully operational. The delay was mainly due to the civil war which wracked the country from independence from Portugal in 1975 until 2002.

An expansion of the hydroelectric station will increase the power supply five-fold, by raising the height of the dam by 30 metres (to 132 metres), as had already been planned in the time of the Portuguese colonial authorities, said Fabricio Andrade, the local manager of the Brazilian company Odebrecht which heads the consortium in charge of the works.

The greater height of water in the reservoir will increase the capacity of the four old turbines, from 45 to 65 megawatts (MW) each. Barring unforeseen circumstances, the expanded station will be ready in 2015, to generate 960 MW and mitigate power outages in Luanda.

The legacy of the war continued to have an effect on the plant during the expansion phase. Construction of the spillway needed was only able to commence after an area of landmines was cleared, which took six months, Andrade said.

Odebrecht was contracted by the Angolan state National Electricity Company (ENE) to carry out three tasks at Cambambe.

The first, which began in 2009, is to refurbish the four original turbines which had deteriorated to the point that they could not generate even half their nominal capacity of 45 MW. A final turbine remains to be refitted with electronic control panels, which will provide “more safety with fewer workers,” Andrade said.

The other two tasks are to raise the height of the dam and spillway, and build a new generator complex, which is to be ready by 2015.

The construction site employs 2,100 people, 89 percent of whom are Angolan, mainly from the surrounding area or the nearby city of Dondo.

There are also 238 workers of a wide range of nationalities, who live together on-site. They come from 15 countries, from Latin America to Eastern Europe, Andrade said.

The foreign employees work for Odebrecht or its partner companies in the project: the Brazilian firm Engevix, France’s Alstom and Germany’s Voith Hydro.

Rufino Álvarez, from Peru, is a typically mobile worker who goes from one mega works project to another. He started out in his own country in 1981, working for other Brazilian transnational corporations, before he joined Odebrecht 25 years ago.

The company sent him to several countries, and he arrived in Angola in 2009 along with his boss, Brazilian equipment manager Roberval Fonseca. They worked on various infrastructure projects in Luanda. Before coming to Cambambe this year, he went home to Peru for a long visit and then to Colombia.

“My work is two-fold: I have one job at the work site and another teaching Angolans, so that this country can continue to grow,” said Álvarez, adding that he has not brought his family over because his children “are all grown up.”

Fonseca, for his part, is keen on employing women and training them to work on soldering jobs and electrical apparatus and motors – trades that were once considered exclusively men’s work. “They are quicker learners, they do everything more carefully and with greater discipline, and are more efficient,” he said, adding that he was happy with the six women workers he has hired so far.

The structures built at Cambambe are small compared with other power plants with a similar capacity. That is because its machine room is underground, installed in a tunnel that fits a large truck. The new second generator will also be underground, with water flowing under the hill to turn the turbines.

And the reservoir itself is small in size. In its middle reaches, the Kwanza river has a steep descent of 940 metres over just 200 kilometres, and its riverbed forms deep valleys and curved gorges, all of which are favourable to the generation of hydropower.

This means the expansion of the Cambambe complex will also have minimal environmental impact. The reservoir will only be enlarged by six square kilometres, said Vladimir Russo, the head of Holísticos, the firm that carried out the environmental impact assessment for the project.

No population will be affected by the dam, because people were never allowed to settle around the hydroelectric station, which was protected during the war, said Russo, who was a management director for the Environment Ministry and a founder of Juventude Ecológica Angolana, an environmental NGO created by young Angolan activists.

Laúca, the biggest power station to be built on the Kwanza river, will have a reservoir size of only 16.6 square kilometres, according to a feasibility study by Brazilian consultancy Intertechne. That is next to nothing for a capacity of 2,067 MW.

Odebrecht is also the Brazilian partner in the Laúca dam on the Kwanza, a river that has given its name to Angola’s currency since 1977, in recognition of the symbolic value of the river.

The Brazilian corporation has also built the Capanda dam, 140 kilometres upstream. The project was contracted in 1984 but only completed in 2007, due to delays caused by the civil war.

This year the company was in charge of diverting the Kwanza river in preparation for the construction of the Laúca hydroelectric complex – situated between Capanda and Cambambe – which has still not been put out to tender.

Odebrecht is also responsible for the public company Águas de Luanda’s project to draw water from the Kwanza for treatment and distribution in the suburbs surrounding the capital.

Near the Capanda hydropower station, Odebrecht has undertaken the development of an agroindustrial hub where it plans to produce sugar, ethanol and electricity from sugarcane, maize and other crops. The project will be based on the large Pundo Andongo estate and will also promote family farming.

This is only part of the Brazilian company’s business activities and projects in Angola, where it is the largest private sector employer, with a total of nearly 20,000 workers.