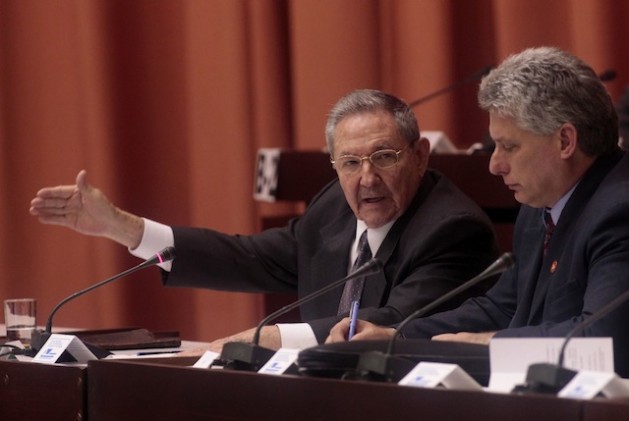 Miguel Díaz Canel (right) is now the No. 2 in the Cuban government. Credit: Jorge Luis Baños/IPS

HAVANA, Feb 26 2013 (IPS) - The new faces in key positions in parliament and other branches of the Cuban state will need to prove their charisma and potential political leadership, possibly in a more participative way, in the context of current economic and social changes, analysts say.

The new leaders “will have to earn their promotion to their new appointments by their performance in putting into practice the ‘updating of the model’ (as the economic and social reforms are called) and by the popularity and prestige they achieve among their fellow citizens”, Carlos Alzugaray, a diplomat and university professor, told IPS.

At the first meeting of the National Assembly of People’s Power, the island’s single-chamber parliament, on Sunday Feb. 24, Raúl Castro was re-elected president of the country and Miguel Díaz Canel, a 52-year-old graduate of military academies with a solid career in the ruling Cuban Communist Party (PCC), became first vice president of the Council of State.

Díaz Canel takes over the second most important government position from José Ramón Machado Ventura, a member of the so-called “historic generation” of the Cuban revolution that was victorious in January 1959, made up then of young people who fought against the dictatorship of Fulgencio Batista (1901-1973).

The 82-year-old Machado Ventura, and the 73-year-old commander Abelardo Colomé, another historic leader, gave up their posts “in favour of the promotion of the new generation”, said Castro in the closing speech of the day, which had opened the eighth legislative period (2013-2018).

Castro announced that the next five years would see “the gradual and orderly transfer” of the most important posts.

Lázara Mercedes López Acea, the 48-year-old president of the PCC in Havana, and Salvador Valdés Mesa, the 67-year-old secretary of the Workers Central Union (CTC), the only trade union in Cuba, were also elected vice presidents of the 31-member Council of State.

Gladys Bejerano, the Comptroller General of the Republic, and commander Ramiro Valdés, were re-elected vice presidents, and Machado Ventura took up the last of the five vice presidencies.

Half of the 612 seats in the Cuban parliament, which are renewed every five years, are occupied by candidates elected in national elections, while the rest are elected by representatives of social organisations and the different sections of the PCC, the only legal party on the island.

Political dissidents in Cuba denigrate the electoral system and claim that their parties, none of which has legal recognition, should have the opportunity to present candidates.

The National Assembly elected its leaders at its first session after the general elections of Feb. 3, with the presence – for the first time since August 2010 – of Member of Parliament Fidel Castro, the historic leader of the revolution and elder brother to Raúl. Esteban Lazo, a long time leading member of the PCC, is now president of the Cuban parliament.

Ana María Mari Machado remained vice president of parliament, and Miriam Brito stayed on as secretary. The National Assembly held a direct, secret vote for a group of candidates to the Council of State, which is the supreme representation of the Cuban state under the constitution. The Central Committee of the PCC participates in the selection of the candidates.

The average age of members of the new Council of State is 57. Thirty-nine percent are Afro-descendants or of mixed descent, and nearly 42 percent are women. Lazo said the authorities wish to increase the proportion of women in the Council, and in all the country’s institutions.

Raúl Castro declared that this five-year period will be his last term of office as president, “independently of when the constitution is perfected”.

In 2011, the Sixth Congress of the PCC agreed to limit important state and government positions to a maximum of two consecutive periods, and to establish a maximum age for the holders. Making these changes binding, as well as other reforms introduced since 2008, requires constitutional modification by means of a referendum.

“The new leaders will not be able to govern Cuba as Fidel and Raúl Castro have done, because they lack the charismatic legitimacy and the authority they (the Castros) had as leaders of the historic generation,” said Alzugaray.

In some quarters called the “transition” and in others the “successor generation” or the changing of the guard, this phenomenon is “desirable and normal” according to the diplomat. In his view, this group faces the challenge of fomenting “a more collectivist and democratic model of leadership (and) expansion of public spaces for political deliberation” as well as more active citizen participation.

Member of Parliament Lisette Conde noted that young people are keen to be represented in Parliament.

“Our greater participation in the present legislature is an opportunity to express our opinions and experiences,” this 20-year-old lawmaker, the youngest in the National Assembly, told IPS.

Conde, a medical student who was elected by the 10 de Octubre municipality in Havana, said the process of changes in the country is “very important” for youth.

Updating the Cuban economic model, along with social and institutional adjustments, is now “entering questions of wider scope, complexity and profundity,” said Raúl Castro. A decree-law with new regulations, and greater openness to foreign investment, may emerge this year, he said.

The National Assembly is also planning to discuss and design a labour code to deal with the needs of the growing private sector and other forms of non-state activity. The Cuban authorities are preparing a programme for development up to 2030, which will set guidelines for the economic reforms.