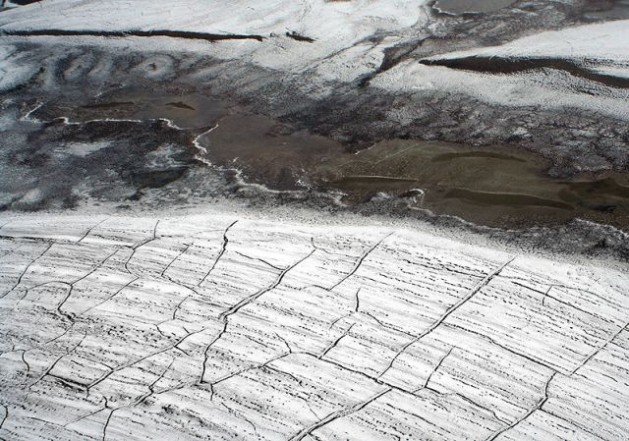 Crack patterns in Arctic permafrost as viewed from a helicopter. Credit: Brocken Inaglory/cc by 3.0

UXBRIDGE, Canada, Feb 14 2013 (IPS) - Thawing permafrost is emitting more climate-heating carbon faster than previously realised. Scientists have now learned that when the ancient carbon locked in the ice thaws and is exposed to sunlight, it turns into carbon dioxide 40 percent faster.

“This really changes the trajectory of the debate” over when and how much carbon will be released as permafrost thaws due to ever warmer temperatures in the Arctic, says researcher Rose Cory of the University of North Carolina.

There are 13 million square kilometres of permafrost in Alaska, Canada, Siberia and parts of Europe. As previously reported by IPS, a 2011 study estimated that global warming could release enough permafrost carbon to raise global temperatures three degrees C on top of what will result from human emissions from oil, gas and coal.

Human emissions are headed for four degrees C of global heating, warned the International Energy Agency (IEA) this week. A rapid “decarbonization of electricity supply” is needed to avoid that future, the IEA said as it released a new book titled “Electricity in a Climate-Constrained World”.

“The solutions are well-known: increased energy efficiency, greater research and development of low-carbon energy production, and putting a realistic price on carbon,” the book says.

Carbon emissions from permafrost are not included in IEA projections. Climate models haven’t included them either, Cory told IPS. Nor has anyone factored in the latest discovery that sunlight accelerates the conversion of ancient carbon into carbon dioxide gas.

“We’re trying right now to scale up this finding to get an estimate of how much more carbon might be released,” she said.

Cory and her colleagues studied places in Arctic Alaska where permafrost is melting and is causing the overlying land surface to collapse, forming erosional holes and landslides and exposing long-buried soils to sunlight.

They found that sunlight increases bacterial conversion of exposed soil carbon into carbon dioxide gas by at least 40 percent compared to carbon that remains in the dark. The team reported its findings in an article published online Feb. 11 in the Proceedings of the National Academy of Sciences.

“This means permafrost carbon is potentially a huge factor that will help determine how fast the Earth warms,” said co-author George Kling, a University of Michigan ecologist.

“We can’t say how fast this Arctic carbon will feed back into the global carbon cycle and accelerate climate warming on Earth, (but) the fact that it will be exposed to light means that it will happen faster than we previously thought,” said Kling in a statement.

Once the Arctic gets warm enough, the carbon and methane emissions from thawing permafrost will kick-start a feedback that will amplify the current warming rate, Kevin Schaefer, a scientist at the National Snow and Ice Data Center (NSIDC) in Boulder, Colorado, previously told IPS.

There is no accurate estimate of methane emissions, which are 40 times as potent in terms of warming as carbon. Methane could have a big impact on temperatures in the short term, Schaefer said.

In 2011, Schaefer’s research showed that the permafrost “tipping point” was just 15 to 20 years away. In light of Cory’s discovery, that will now have to be revised. The only question is how much sooner.

Prepare for a three to five degree C warmer world, said Sir Robert Watson the former chair of the Intergovernmental Panel on Climate Change (IPCC). Speaking at a symposium in London Tuesday, Watson, the science director of the Tyndall Centre for Climate Change Research, said the world has missed its chance to stay below two degrees C.

“All the evidence, in my opinion, suggests we’re on our way to a three to five degree C world,” Watson told participants at the symposium.

When Watson was chair of the IPCC from 1997 to 2002, optimism was high there’d be a global agreement to limit emissions. “We were hopeful that emissions would not go up at the tremendous rate they are rising now,” he told the Climate News Network, a UK journalism news service.

“(Now) all the promises in the world, which we’re not likely to realise anyway, will not give us a world with only a two degree C rise.”