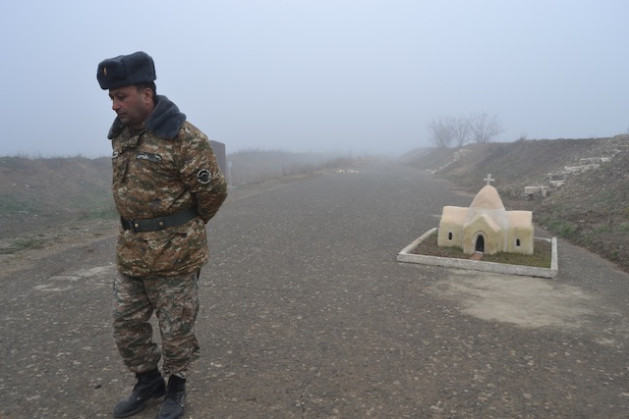 Colonel Arzvik on the road to Baku. Credit: Enzo Mangini/IPS.

STEPANAKERT (Nagorno-Karabakh Republic, Caucasus), Mar 4 2013 (IPS) - A Soviet-era 4×4 snores down the muddy road to the front line. It’s another foggy day in the flatlands east of the borders of the tiny and once autonomous region of Nagorno-Karabakh, sandwiched between Armenia and Azerbaijan.

The capital, Stepanakert (population 50,000), is 30 kilometres west. The Azerbaijan capital, Baku, is 400 km east and the Armenian capital, Yerevan, 350 km west. The region is populated by Armenians.

Agdam town here is in ruins. Once home to 30,000 people, it was demolished in the conflict between Armenians and Azeris in the days of the Soviet Union. In 1936 dictator Joseph Stalin gave the region to the Azerbaijan republic of the then Soviet Union.

Following the break-up of the USSR, people in the region demanded greater autonomy from Azerbaijan. At the time, Armenians were 75 percent of the population of 190,000 living in the 11,500-square kilometre region deep in the Caucasus range, 2,400 km south of Moscow.

They accused Baku of “Azerization”, and wanted to join the newly independent Armenia. When they eventually proclaimed an independent Nagorno-Kharabakh Republic (NKR), Azerbaijan sent in its tanks.

Between 1992 and 1993, 70 percent of NKR was conquered by Azeri forces. Armenians counter-attacked, retook almost all the lost ground, pushed on, and cut into Azeri territory a buffer zone a few kilometres deep. Azeris kept control of a small northern province.

The war cost 30,000 lives and led to a million refugees, almost equally divided between the two sides. The war officially never ended and the armies are still there, on the same 1994 ceasefire line.

“No photos here, please,” the lieutenant from the NKR Defence Force, as the army is officially called, tells us on our way to the ceasefire line. He salutes his commanding officer, Lieutenant Colonel Arzvik, a solidly built 45-year-old man with green eyes, two gold teeth and a hunting rifle.

“You’re lucky. With today’s fog, there won’t be any snipers,” says Arzvik. “Yesterday our soldiers got shot twice but our adversary missed the mark. No snipers today, but keep your head down anyway.”

He points to a road ahead. “This leads to Baku. But we stay here as we have for the last 19 years, since the ceasefire. We are not interested in conquering Azeri land. We’ll keep our positions as long as necessary and not one day more.”

The trenches remind one of those in World War I: mud walls covered with chunks of cement, and a small concrete post where soldiers sleep after their night sentry duty. Ak-47s and other weapons stand in one corner, next to a stove with a kettle. Wires with empty cans tied to them run along the outer perimeter. “If they come, we hear them,” says Arzvik. “We have more modern devices, but these are actually very effective.”

“Conscripts stay in the army two years,” Arzvik says. “But if we are attacked, everyone in NKR will take up arms. Just like we did in 1991.”

The soldiers, barely out of their teens, seem efficient: guns cleaned, ammunition ready, warm winter uniforms and new boots. It is clear that most of them would rather be looking for a job or studying. They are the first generation of a republic of 150,000 citizens, with its own parliament, president, visas and ministries – that no one has recognised.

The economy relies on Armenian diaspora money, without any foreign direct investment or aid. The only way in and out is a mountain road through Armenia along the Tamerlan Pass, 2,500 metres high. Local authorities want to reopen the only airport in the region on the outskirts of Stepanakert, closed since 1992. But Azerbaijan has threatened to shoot down any plane landing in NKR.

A lot of workers move to Armenia to find better wages. The local average monthly wage is around 200 dollars.

International NGOs are all but absent, with the exception of The Halo Trust, a British NGO engaged in demining. Since the end of the war in 1994, more than 350 people have been killed or injured by mines or cluster munitions. The Halo Trust estimates it will take another five years to complete clearing operations. In the last two years, its local staff has been reduced by half, from 280 to 140 people.

Peace-building attempts by the Minsk Group, a diplomatic task force created in 1992 by The Organisation for Security and Cooperation in Europe (OSCE) co-chaired by the U.S., France and Russia stalled in 2011. Russian president then and now Prime Minister Dimitri Medvedev brokered a meeting between Azerbaijan President Ilham Aliyev and Armenian President Serzh Sargsyan in Kazan in Russia. The summit failed, prompting a further round of cross-blame.

Stranded in a political limbo, people from NKR are rebuilding capital Stepanakert and their villages in the mountains, where the scars of war are still deep. In the confrontation between the two battling neighbours, they have neither the advantages of the quickly transforming EU-oriented Armenian economy, nor the benefits of the oil bonanza of Azerbaijan.

The conflict has become irrelevant to the world. When it started at the end of the 1980s, it was used and watched as a detonator for Soviet collapse. The U.S. Congress in 1989 and the EU Parliament in 1993 approved resolutions supporting Nagorno-Karabakh people’s right to self-determination. Once the Soviet Union fell apart, few gave a thought to these people.

This could be a crucial year. On Feb. 18 Armenians re-elected Serzh Sargsyan as president of their republic of 3.5 million citizens, with some doubts over the fairness of the electoral process. He wants to settle the issue by “creative” confidence building steps.

Baku, meanwhile, is using its oil wealth to court international support for its claims. Aliyev, facing elections in October this year, could be tempted by national pride to harness more support from an increasingly dissatisfied 10 million citizens. This could translate into a more offensive attitude on the Azeri side of the frozen frontline manned by Arzvik and his young soldiers.