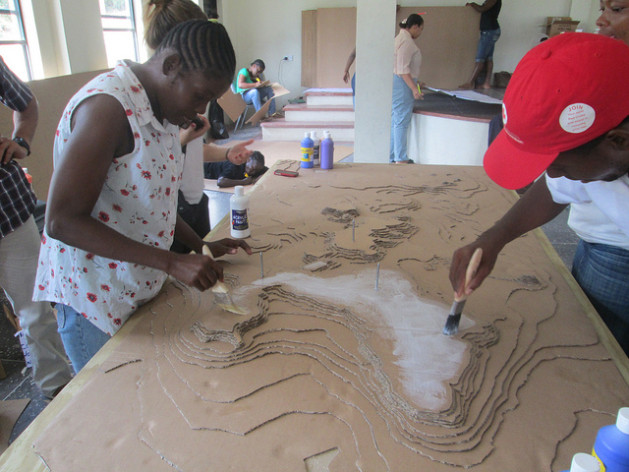 KINGSTOWN, St. Vincent, Mar 5 2013 (IPS) - A new weapon in the arsenal against climate change is tapping local knowledge to bridge the policy gap and let communities make their own informed decisions about how to manage livelihoods, natural resources, culture and heritage.

“In the past, most climate change initiatives have been top-down, coming from the government level,” says Martin Barriteau, executive director of Sustainable Grenadines (Sus Gren), a trans-boundary non-governmental organisation committed to the conservation of the coastal and marine environment and sustainable livelihoods for the people between Grenada and St. Vincent and the Grenadines.

Not only will climate change be costly, it could be the thing that cripples small island economies.

“[But] our communities, especially the ones on the coast, have been witnessing and adapting to the effects of climate changes over time,” he says.

Participatory 3D models are manufactured at the village level using paper and layered cardboard. Based on their personal knowledge of the area, informants depict land use and cover and other features on the model by the use of pencils, pushpins (points), yarns (lines) and/or paint (polygons). Once the model is completed, a scaled grid is applied to transpose spatial and georeferenced data into GIS.

For example, the models can bring communities together around priority areas such as flood zones, drought concerns, fish populations and mangrove protection.

The maps are also an educational tool for youth and children. Abdon White, a geography teacher at Union Island Secondary School, told IPS, “One of the first tasks we had, we did the tracing of the contour lines and that enabled us to actually build the P3DM model of Union island.

“One part of the CX syllabus is the map reading section and that they work with contours and distances and it will help them to get a better understanding to working with maps, distances, scales because the whole part of the entire project had to deal with legend and building the key to mapping. The entire exercise will be good for them to improving their overall map skills,” he said, referring to his pupils’ involvement and how he sees it benefiting them in writing the Caribbean Examination Council (CXC) exam.

In general, Barriteau says P3DM brings that “sense of awareness of climate change to these communities with the hope that they will be empowered in making decisions about climate which would [then] inform policy decisions”.

Last week, SusGren, in collaboration with the Netherlands-based Technical Centre for Agricultural and Rural Cooperation (CTA) and The Nature Conservancy (TNC), brought together members of local communities and regional and international organisations on Union Island, one of the Grenadine Islands, for a one-week participatory three-dimensional mapping exercise.

It’s no secret that Small Island Developing States (SIDS) like St. Vincent and the Grenadines, Grenada and other Caribbean islands are especially susceptible to the impacts of climate change and extreme climatic events, such as hurricanes and floods.

“Impacts of climate change in the Caribbean are projected to include sea level rise, ocean warming, and changing rainfall patterns,” the organisers said in a document circulated at the workshop.

“These are expected to have a significant economic and social impact. Threats from climate change and extreme climatic events are exacerbated by the ongoing problems caused by human development, including inappropriate land use and poorly planned physical development, inappropriate agricultural practices on slopes, point and non-point source pollution including from improper disposal of solid wastes.”

TNC’s “At the Water’s Edge” project focuses on helping small island states enhance their resilience to climate change by restoring and effectively managing their marine and coastal ecosystems and strengthening local capacity for adaptation.

The new mapping technology will aid this project by building local, national and regional capacity to support eco-based adaptation, empowering communities within the pilot sites in Grenada and Union Island, and developing the communications capacity of community-based organisations and NGOs.

On completion of the workshop, participants are expected to be in a position to discuss the value of local spatial and traditional knowledge as well as describe how P3DM can be used to document, geo-reference and visualise local knowledge. The four- by eight-foot model will belong to the community.

“Anyone wanting to use it must first seek the permission from the community. Sustainable Grenadines, which is leading the initiative on Union Island, would be working with the local community to develop ecosystem based solutions to deal with the effects of climate changes,” Barriteau says.

He said a suite of concrete climate change adaptation strategies will emerge from the P3DM initiative, and hopes it will not be viewed as just another overly technical, jargon-laden “fix” that obscures more than it enlightens.

“We hope that P3DM will put communities in the forefront on climate change issues. Not only are they bombarded, most times they are not involved. According to a Caribsave Climate Change study, sea level rise scenario 2050 is estimated at 489 million dollars to the economy of Grenada. Not only will climate change be costly, it could be the thing that cripples small island economies,” he added.

Tyrone Hall, a communications consultant at the Belize-based Caribbean Community (CARICOM) Climate Change Center (CCCCC), told IPS that the three-dimensional mapping is being done across the African, Caribbean and Pacific (ACP) region on a small-scale, “so sharing our experiences via new media tools such as social media allows us to make public in an accessible way our experience and the lessons learnt.

“We also see social media as a natural fit with this activity given its participatory nature. The CCCCC is in a position to use its broad online social media platforms to share this exercise with a wide audience, particularly given our strong relationship with the Small Island Developing States (SIDS DOCK) Secretariat that includes the Pacific islands,” he added.

Barriteau said that as part of the part of the Union Island P3DM process, a film will be developed that will be shown in other ACP countries while the CTA is “driving this methodology worldwide”.

Grenada will be the next Caribbean country in which the P3DM exercise will be held in April. Organisers says the core problem the project will tackle is that policies to address the impacts of climate change have been created largely without the effective engagement of local communities – from which useful traditional knowledge exists and among whom much of the adaptation action will need to be taken.

“The effect is that policy responses in the Caribbean have largely been at the general policy level, with few specific policies or plans developed to address priorities at the landscape or site level,” they say.

“Sectoral considerations or traditional knowledge have not been adequately considered, stakeholders are not effectively engaged and there has been little on the ground action to build resilience or to ‘climate proof’ key sectors such as tourism and agriculture.”