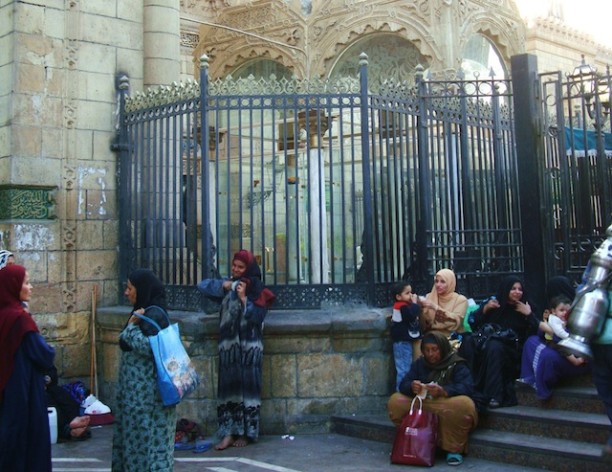 CAIRO, Apr 26 2013 (IPS) - The mob that surrounded the home of Mohamed Nour, an Egyptian Shia living in Cairo’s Bab El-Shaariya district, claimed it was on a mission to “inoculate” Egypt against Shia religious beliefs. Without intervention, Shia doctrine would spread across Egypt “like a cancer,” they had warned.

Born a Sunni Muslim, Nour converted to Shia Islam nearly two decades ago. He has faced constant threats and harassment since his Sunni neighbours learned of his conversion early last year.

“My neighbours no longer talk to me and they are trying to get me to move from here,” he says. “People throw rocks at my house, make threatening phone calls, and set my car on fire. I am worried about my family’s safety.”

The schism between Sunni and Shia Islam dates back to the death of Prophet Muhammad in 632, but hostility towards Egypt’s minority Shia community is firmly rooted in modern politics.

During his 29 years in power, former Egyptian president Hosni Mubarak is said to have expressed a visceral hatred of Iran, crafting his foreign policy to contain the “Shia tide”, the belief that Iran was exporting Shia Islam to expand its political influence in the Arab world.

“Mubarak’s regime was deeply suspicious of its Shia minority,” says Ishaak Ibrahim, a religious rights researcher at the Egyptian Initiative for Personal Rights (EIPR). “It assumed that all Shia were loyal to Iran, and closely monitored their activities and prevented them from gathering. Many Shia were arrested on (spurious) charges.”

Activists say Mubarak’s downfall in 2011 opened a brief window for Egypt’s Shias, whose estimated numbers range from 800,000 to about two million. But the window soon slammed shut, and conditions have worsened since the Islamist government of President Mohamed Morsi came to power last year.

The state continues to apply discriminatory measures against Shias, while leaving the community exposed to the growing danger of Salafi extremism, says Ahmad Rasem El-Nafis, a prominent Shia scholar.

“It’s much worse now under Morsi because there is no security,” he tells IPS. “The Salafis are spreading lies about us and committing crimes against us with (impunity). I had an attempt on my life back in July 2011… and I am receiving threats almost daily.”

Salafis, a radical Sunni sect influenced by Saudi Wahhabism, were forced underground by Mubarak’s authoritarian rule. Since the revolution, they have organised politically and managed to capture more than a quarter of the vote in last year’s parliamentary elections, second only to the Muslim Brotherhood.

Shia Islam has a long pedigree in Egypt. Cairo was founded in 969 by the Shia Fatimid dynasty, which ruled Egypt for 200 years and shaped its identity. Even today, Egyptian Sunnis visit revered Shia shrines such as El-Hussein and Sayeda Zeinab, and unwittingly incorporate Shia practices into their traditions and funerary rites.

"It's much worse now under Morsi because there is no security”

“You cannot readily distinguish between Sunni and Shia by their behaviour,” El-Nafis asserts. “The differences between the two Islamic sects are manufactured and exaggerated for purely political reasons.”

To avoid persecution, many Shia practise their faith under the umbrella of Sufism, a mystical brand of Islam that shares Shia reverence for the Ahl Al-Beyt, the family of Prophet Muhammad.

“We (Shia) still can’t meet openly as a group,” says El-Nafis. “If I visit a Shia in his home the Salafis will say we’re making a husseineya (Shia house of worship), and if I go to a mosque with other Shia for sure we will be harassed.”

But even alone, Shias face bigotry and a legal system that rights groups say violates the tenets of religious freedom.

Last July, a criminal court sentenced Mohamed Asfour, an Egyptian Shia convert, to one year in prison for “desecrating a place of worship” and “insulting the Prophet’s companions.” Prosecutors said Asfour was found placing a stone beneath his head while praying in a village mosque, a practice frowned upon by Sunni Muslims.

The arrest followed weeks of abuse after villagers learned of Asfour’s conversion to Shia Islam. His conversion provoked the animosity of his neighbours and in-laws, who reportedly pressured him to divorce his Sunni wife.

“Egypt is a Sunni country and we must protect society from Shia influence,” says Khaled Fahmi, a Cairo textile merchant who accuses Iran of “using paid agents” to proselytise. “Poor and illiterate Egyptians are easily deceived by their lies.”

Like many conservative Sunni Egyptians, Fahmi is outraged by the Egyptian government’s tepid overtures toward rapprochement with Iran.

President Morsi faced sharp criticism at home for attending a regional summit in Tehran last August. Iranian president Mahmoud Ahmadinejad endured the humiliation of having shoes thrown at him when he visited Cairo in February.

Earlier this month, a group of mostly Salafi demonstrators surrounded the residence of Iran’s charge d’affaires in Cairo to protest a new tourism exchange protocol that saw the arrival of Iranian tourists in Egypt for the first time in over 30 years.