COLOMBO, Apr 24 2013 (IPS) - The eve of the much anticipated Sinhala and Tamil New Year, celebrated across the island of Sri Lanka in mid-April to mark the end of the harvest season, was marred by a series of attacks, reminding everyone that “peace” does not mean a lack of violence. 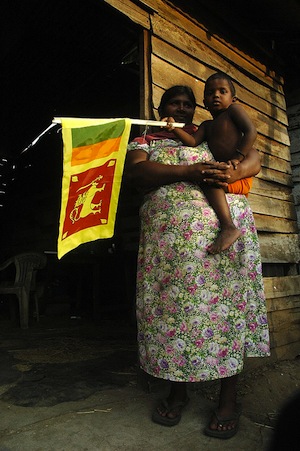 A new U.N. resolution on Sri Lanka suggests that international pressure on the government will not diminish any time soon. Credit: Amantha Perera/IPS

On Apr. 13, the printing presses of the Jaffna-based Tamil language ‘Uthayan’ newspaper came under attack, reportedly the 37th time the paper or those attached to it have been targeted.

In 2006, unidentified gunmen killed two of the publication’s employees, and during the last stages of the civil war that unfolded here in early 2009, some of the staff members lived and worked from its premises, too scared to step out of doors.

About two weeks before this latest incident, an Uthayan distribution centre in the northern town of Kilinochchi was attacked. Critics say the newspaper, owned by an opposition Tamil parliamentarian, has been partial to Tamil separatists. The government has described the damage on the distribution centre as an “inside hatchet job”, claims rejected by the publisher.

Further south, a group of Buddhist extremists calling themselves the Bodu Bala Sena (BBS) have been spearheading a campaign of hatred towards Muslims, inciting mobs to attack Muslim-owned shops and business establishments.

In the beginning of April tensions flared when police broke up a candlelight vigil in front of the main office of the BBS. Some of those who said they had simply come to spread a message of peace were either arrested or verbally assaulted by the police.

These incidents come barely a month after the passage of the second successive U.S.-sponsored resolution on Sri Lanka at the U.N. Human Rights Council (UNHRC) in Geneva in mid-March.

The resolution calls on the Sri Lanka government “to conduct an independent and credible investigation into allegations of violations of international human rights law and international humanitarian law” committed during its conclusive war with the separatist Liberation Tigers of Tamil Eelam (LTTE) in 2009 — but stops short of specifying punitive action if the government fails to comply.

Rights groups and aid workers who witnessed the final battles here in 2009 say the fighting displaced over 200,000 people and killed at least 40,000, many of them civilians. The government maintains there were “no civilian casualties”.

“This year's resolution makes clearer than before the international community's deep concern about serious ongoing human rights violations and the need for a proper and independent investigation into allegations."
These unanswered questions threatened to divide the wounded country still further and elicited an international outcry. Finally, in May 2010, Sri Lankan president Mahinda Rajapakse appointed the Lessons Learnt and Reconciliation Commission (LLRC) to investigate the conduct of the armed forces during the war.

The Commission handed its final report to Rajapakse in November 2011. But in February this year, U.N. High Commissioner for Human Rights Navi Pillay said the government has been “selective” in responding to the recommendations put forth by the LLRC.

Now, again, the resolution from Geneva leaves the onus for action in the hands of a government that has time and again dismissed statements and warnings from the international community as an “infringement” on Sri Lankan sovereignty.

Another disappointment was that, despite initial talk of requesting permission for Pillay to be granted full access to probe allegations of on-going rights abuse on the island, the adopted resolution simply calls on the Sri Lankan government to carry out its own investigations that are up to “international standards”.

In what was seen as a major watering down of the text, all references to “unfettered” access for U.N. special rapporteurs were replaced in the final document with a request that the government “cooperate” with special mandate holders and respond to outstanding requests for visits. All eight U.N. special rapporteurs are currently awaiting invitations to visit the country.

Rights activists say it is unlikely that the situation in Sri Lanka will change overnight – it will take time for international pressure to have an impact and that, too, only if it is sustained.

U.S. Ambassador to Sri Lanka Michele J. Sison told a group of journalists on Apr. 8 that the U.S., as the main backer of the resolution, is keeping a close eye on the situation on the ground, warning that “more serious” measures could be on the cards if the Rajapakse government fails to act on international concerns.

“The United States remains particularly concerned about threats against, and attacks on, media outlets in Sri Lanka,” she said, in reference to the attack on the Uthayan premises in Jaffna.

“As we examine next steps, we will renew our consideration of all mechanisms available, both in the Human Rights Council and beyond,” Sison told the Foreign Correspondents’ Association, though she declined to elaborate on what those “mechanisms” would be.

Other experts and rights defenders have issued similar warnings of sterner action. Alan Keenan, Sri Lanka project director of the London-based International Crisis Group (ICG), told IPS, “Sri Lanka can ignore these concerns only at its long term peril. And if the government does continue to ignore these international concerns, I expect the pressure will grow.”

Ruki Fernando, of the Rights Now Collective, a national advocacy body, told IPS that the resolution should not be taken in isolation but evaluated as an indication of persistent international scrutiny of Sri Lanka.

“The resolution acknowledges and expresses concern about serious ongoing violations and calls for more action by the government, including involvement of minorities and civil society and credible and independent investigations into allegations of violations of international humanitarian and human rights law,” he said.

He added that some crucial demands that were included in the original draft of the resolution but later withdrawn – such as “unfettered” access for U.N. special mandate holders – could be included in future resolutions.

“This year’s resolution makes clearer than before the international community’s deep concern about serious ongoing human rights violations and the need for a proper and independent investigation into allegations,” according to Keenan.

The international community’s dedication to holding Sri Lanka accountable to global human rights standards will be reflected in the November meeting of heads of Commonwealth member states scheduled to be held here; already there have been calls for a boycott of the meeting, or a shifting of the location.

The UK, which included Sri Lanka as a country of concern in its latest Human Rights and Democracy Report, said that it would do all it can to “encourage Sri Lanka to demonstrate adherence to Commonwealth values of human rights, democracy and the rule of law, particularly ahead of… the meeting in November”.