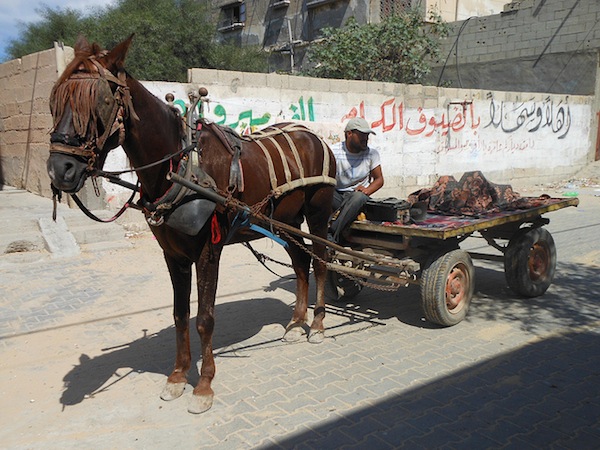 Israeli's blockade of Gaza is crippling the territory. Above, selling yoghurt in Gaza in an attempt to make some sort of living. Credit: Eva Bartlett/IPS

RAMALLAH, Occupied West Bank, May 23 2013 (IPS) - Israel’s crippling blockade of the coastal territory of Gaza is pushing desperate young Palestinians to ever more extreme measures in the search for livelihoods, despite an agreement granting Gazans greater access to their agricultural land.

In search of work, some Gazans try to enter Israel by jumping the fence that separates it from Gaza. Others continue to be shot dead or are seriously injured by Israeli soldiers as they try to farm land bordering the fence, and still others who choose an underground path die when tunnels linking Gaza with Egypt collapse.

Yet an agreement between Hamas and Israel’s COGAT (Coordination of Government Activities in the Territories) following a ceasefire in November stated that Gazans would be able to access most of their agricultural land in Israel’s self-declared 300-metre buffer zone, which runs along the border, by reducing the zone to 100 metres.

The buffer zone is comprised of some of Gaza’s most fertile land in a territory desperately lacking space. Gaza is one of the most densely populated territories in the world, with more than 1.5 million people squashed into an area 41 kilometres long and six to 12 kilometres wide.

Despite the Hamas-COGAT agreement, “the situation remains volatile and unpredictable, and the farmers are extremely vulnerable,” Muhammad Suliman, from the Gaza-based human rights organisation Al Mezan, told IPS. “Palestinians continue to be shot and killed in and near the buffer zone at certain times, while at other times nothing happens.”

Meanwhile, fishermen at work within the Israeli-imposed fishing zone, which was three nautical miles until Israel announced on May 21 that it would extend the zone to six nautical miles, are also being shot at and arrested.

Forced to rely on aid

A bitter paradox is unfolding in that while Gaza’s economic desperation has been somewhat buffered by a rise in international aid and work by non-governmental organisations in the strip, unemployment has skyrocketed, and Gaza is now one of the world’s most aid-dependent territories.

“More than 85 percent of Gazans are dependent on aid to survive, while youth unemployment stands at over 55 percent,” Suliman said.

"Wouldn't it be better for Israel to lift its blockade and allow Gazans to be self-sufficient?"
-- Chris Gunness

“The UN Relief and Works Agency (UNRWA) is going around begging the international community for donations to help Gazans survive economically,” a spokesperson for UNRWA, Chris Gunness, told IPS. “Wouldn’t it be better for Israel to lift its blockade and allow Gazans to be self-sufficient?”

“Unless the blockade is lifted and some of the world’s most entrepreneurial and business-minded people are allowed to leave Gaza in pursuit of business ventures, Gaza will remain increasingly desperate and dependent on international aid,” Gunness added.

Al Mezan stated that last week Israelis shot with machine guns at a group of fishing boats off the coast of Beit Lahiya in the northern part of the Gaza Strip. Israeli military boats arrested two men, Mahmoud Zayid, 27, and his brother Khalid, 25, from a small fishing boat, which was about 400 meters off the coast and approximately 1.5 nautical miles south of the Northern Israeli restricted zone.

In another attack on May 19, Israeli naval vessels opened fire at Palestinian fishing boats off the coast of Deir Al-Balah in the Middle Gaza district. The boats were also within the Israeli-sanctioned fishing zone, about three nautical miles from shore, when they were attacked.

The United Nations Office for the Coordination of Humanitarian Affairs (OCHA) states that under the 1993 Oslo Accords, Palestinian fishermen were permitted to go 20 nautical miles out to sea. Since Israel imposed the blockade in 2006, the area has been reduced to 6 nautical miles, to devastating effect. In 2006, 2,500 tonnes of sardine were caught, in comparison to 234 tonnes in 2012.

According to the international aid organisation Oxfam, such economic restrictions by Israel are pushing young Gazans to risk their lives by jumping the fence into Israel to seek employment or entering the tunnels linking Gaza with Egypt’s Sinai peninsula.

Working in conjunction with Oxfam, Al Mezan reported that in the last year 101 people attempted to climb the perimeter fence, with 53 of those younger than 18. And according to Al Mezan’s Suliman, 18 Palestinians were also killed and 26 injured in the tunnels.

In one case last year, a young man, Mahmoud, and two of his friends tried to climb the fence. Mahmoud’s two friends were shot dead by Israeli soldiers while Mahmoud escaped with a bullet injury to his leg. The young man had lost his previous part-time job at a café, where he earned 4 dollars a day. Desperate to help support his large family, Mahmoud had taken the risk of entering Israel.

90 Palestinians, including 11 children and three women, were killed in the buffer zone in the last three years, and as Suliman pointed out, “while some of these were fighters killed during Israel’s military assault on Gaza last November, most of those killed were civilians.”