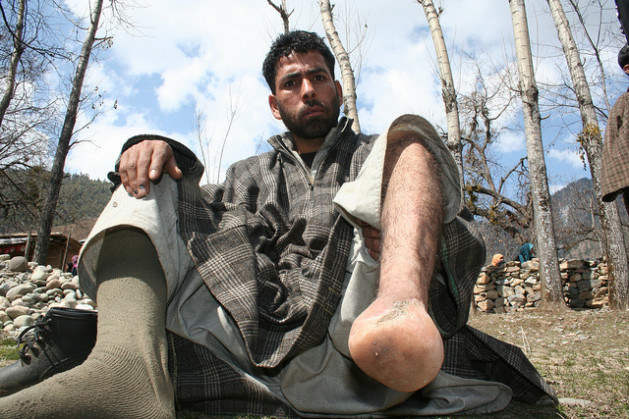 Qadir Sheikh, a landmine victim from Warsun in Kashmir, says that his handicap will mean no education for his two daughters. Credit: Athar Parvaiz/IPS

UNITED NATIONS, May 26 2013 (IPS) - Slavery. Colonialism. Apartheid. Gender discrimination in voting. All were abolished in most places after longstanding battles – largely in bygone eras.

Now a high-level panel is scheduled to meet next month to discuss another politically sensitive issue: Should the institution of war be abolished?

"If the world cannot find a way out of war, then we may well be defeated as a civilisation." -- Siddharth Chatterjee of the IFRC

“I think there is little consistent effort to challenge the view that war is inevitable and to begin serious education from the time children enter school about conflict resolution and the actions we all need to take to create a global culture of sustainable peace,” said Williams, who led the highly successful global campaign to ban anti-personnel landmines.

Asked if the concept of eliminating wars should begin in the minds of politicians and decision-makers or with the leaders of the global arms industry, she said: “I think the work to ending wars must begin at all levels.”

Williams said it should extend from educating children about the horrors of war – “and not pretending it is all heroic and patriotic” – to pressuring policy and decision makers to change their thinking about war as a solution to problems.

“Tackling the arms industry directly would likely not be as fruitful and they stand to lose the most,” she added.

Williams will be one of the participants, along with diplomats, former senior U.N. officials and anti-war activists, at a briefing co-sponsored by a coalition of non-governmental (NGOs) organisations and Switzerland, a country which has not been in a state of war since 1815.

Scheduled to take place Jun. 6, the briefing will focus on the topic “Determined to Save Succeeding Generations from the Scourge of War.”

“Maybe if more women were at all decision making tables and at all levels of governance (per Security Council resolution 1325), we would see less violence,” she added.

Asked for his take, Siddharth Chatterjee, chief diplomat at the International Federation of Red Cross and Red Crescent Societies (IFRC), told IPS, “If the world cannot find a way out of war, then we may well be defeated as a civilisation.”

Asked about the role of politicians, decision-makers and the global arms industry in preventing wars, Chatterjee said, “Simple economics. Once the demand for war stops, the tools that supply it to wage the war will also stop”.

He said it goes beyond politicians and policy makers. And civil society can actually play a strong role in preventing wars.

A backgrounder to the briefing released here points out that since the U.N.’s creation, the international community has not seen a conflict with the same level of globally widespread catastrophe as the Second World War, which motivated governments toward the creation of the world body.

“Unfortunately, the scourge of war has not disappeared. Now, nearly 70 years after the U.N. Charter’s signing, ongoing violent conflicts continue to inflict unimaginable suffering around the world,” it says.

The current crisis in Syria, for example, has resulted in over 70,000 deaths so far, with no end in sight.

According to the latest statistics, over 1.7 trillion dollars is spent globally on armaments, making up about 2.5 percent of the world’s gross domestic product (GDP).

U.N. Secretary-General Ban Ki-moon says the world is over-armed and peace is underfunded.

Asked about the validity of the view that the fear of nuclear weapons has done more for global peace than any other threat, Williams told IPS: “No, it is not valid. You cannot prove a negative.”

She said it is a claim easy to make because there is no real answer.

Growing up under the threat of nuclear war, however, has marked people for life, she added.

“I had to practice curling up in a ball under my desk in grade school to know how to protect myself during nuclear attack. I was totally terrified. It most definitely did not feel like a peaceful world,” she added.

Weiss said the secretary-general has been a champion for disarmament, asserting that nuclear disarmament in particular “is critical to global peace and security”.

“Increasingly I find people talking about the immorality, illegality and glorification of war and the militarisation of society,” she said, adding that the 1999 Hague Agenda for Peace and Justice for the 21st Century said: ‘Peace is a Human Right and Time to Abolish War’. It was endorsed by 10,000 people from over 100 countries.

The nature of war has changed. Weiss said the journalist Jeremy Scahill has just published “Dirty Wars” documenting armed violence in half the world.

“As long as there are nuclear bombs and nuclear wanna-bees, global security is threatened,” Weiss said.

“If we could abolish apartheid,” she quoted Bishop Desmond Tutu as saying, “why not war?”

Chatterjee told IPS the toll that war takes on a soldier is clear, but what sort of toll does it take on a community?

“What does this say about a community that not only do we send people out to a war that leaves them permanently scarred at the age of 21 or 22, but we also do not help them ease back into civilian life so that they can have a shot at a normal life?

“Doesn’t it affect the future of a country and a people when hundreds of thousands of young people are asked to put their life at risk to defend its borders, only to be told their wellbeing is not of concern to the very people who would ask this sacrifice of them?” asked Chatterjee, who has overseen U.N. relief missions in several of the world’s battle zones.