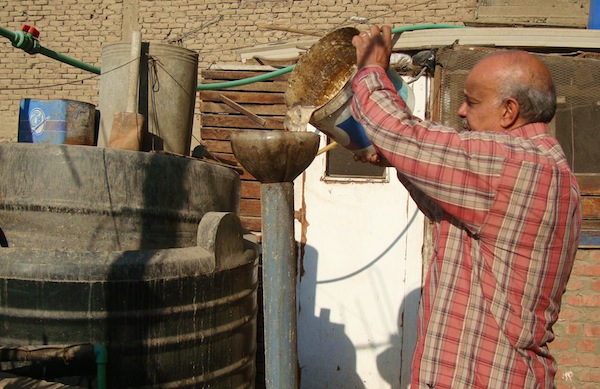 In Egypt, some families are turning to bio-gas digesters that convert organic waste into methane for fuel. Credit: Cam McGrath/IPS

CAIRO, Jun 12 2013 (IPS) - The bio-gas digester on the roof of Hussein Farag’s apartment in one of Cairo’s poorest districts provides a daily supply of cooking gas produced from the kitchen waste his family would otherwise discard in plastic bags or empty into the clogged sewer below his building.

Constructed of two large plastic tubs and mostly recycled materials, the zero-emissions bio-gas unit saves his family about LE 20 (three U.S. dollars) a month in gas bills. And in the ramshackle Darb El-Ahmar district where Farag lives, that works out to nearly a day’s wage.

Farag’s bio-gas digester converts organic waste fed into its 1,000-litre plastic tank into methane gas that can be used to heat water or cook food. Ordinary kitchen waste – everything from food scraps, to stale tea and mouldy bread – is soaked overnight in water to soften, then poured into the tank’s bacteria-rich soup to decompose. A pipe carries the methane gas produced to the family’s kitchen stove.

“I just empty my kitchen waste into it, but anything organic will work as feedstock,” Farag told IPS.

The digester produces about two hours of gas a day in the summer, and slightly less in the cooler winter months, according to Farag. Every week he drains a few litres of dark effluent from the tank.

“I bottle the residue and sell it as organic fertiliser to garden shops,” he explains.

Farag says the unit, which he built for less than LE 1,000 in 2008 (180 U.S. dollars at the time), requires virtually no maintenance, as it has no mechanical parts.

“Egypt needs a system like this, because there is a lot more organic waste now that all the pigs are gone,” he says, referring to the nation-wide pig cull that the Egyptian government carried out in April 2009 in a knee-jerk reaction to the swine flu pandemic.

Pigs were the linchpin of Cairo’s traditional waste management system, consuming up to a third of the 20 tonnes of daily waste produced by the city’s 18 million residents. Without them, the volume of “wet” waste has swollen, clogging sewers and landfills and piling high in city streets and empty lots.

In Manshiyet Nasr, another low-income Cairo district, Solar CITIES coordinator Hanna Fathy constructed his own bio-gas digester in 2009. He has since travelled extensively instructing residents of poor and off-grid communities on how to achieve energy independence through home bio-gas production.

Fathy, currently working on environmental projects outside Egypt, says the government’s energy subsidies discourage Egyptians from investing in sustainable energy solutions. Recovering the initial capital cost of a bio-gas digester can take up to ten years but would take just one year if subsidies were dropped.

“The government doesn’t provide incentives for families to switch to clean energy, so they stick with the cheapest short-term solution, which is to buy gas cylinders,” Fathy told IPS in an earlier interview.

More than 12 million Egyptian households rely on butane cylinders, which retail for LE 8 (1.15 dollars). The tanks last about two weeks and are not without problems.

Apart from the enormous burden the heavily subsidised gas cylinders put on the economy, shortages of imported butane have resulted in long queues at distribution outlets. Disputes over cylinders have even led to fatalities.

The poorly maintained gas cylinders also have an alarming tendency to explode, resulting in catastrophic kitchen fires and injuries.

Electrician Mohamed Rageb, whose wife was severely burned when the gas cylinder she was cooking with exploded in 2010, says the accident pushed him to consider switching to a bio-gas digester. Using a design he found on the Internet he plans to build a compact unit on his balcony.

“I think they are safer, and save time [spent queuing for gas cylinders],” he says.

While instalment plans are available for purchasing energy-consuming kitchen appliances and air conditioners, no credit facilities exist for families switching to green energy bio-gas. Rageb must borrow the full amount to buy the parts for his homemade digester. It could take years to recover the costs, but he is confident his gas bill savings will grow as Egypt’s cash-strapped government phases out energy subsidies.

“Without subsidies, a gas cylinder would cost about LE 100 (14 dollars) to fill,” he points out.

Rageb maintains that if the government would subsidise clean energy technologies instead of unsustainable conventional energy use, price-conscious low-income Egyptians would be the first to make the switch.