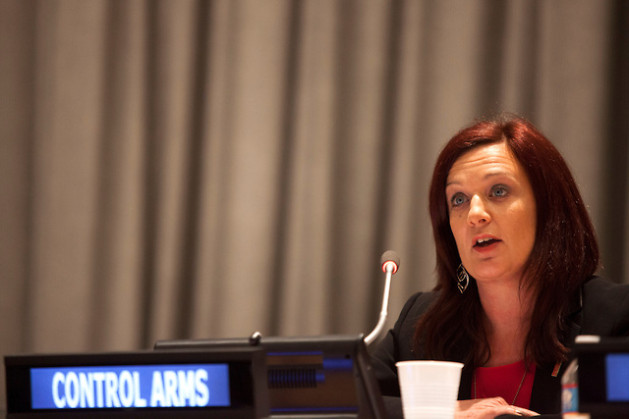 Anna MacDonald of Control Arms speaks at the start of the ceremony for the signing of the Arms Trade Treaty at United Nations headquarters in New York, Jun. 3, 2013. Credit: Keith Bedford/INSIDER IMAGES (UNITED STATES)

UNITED NATIONS, Jun 4 2013 (IPS) - The United Nations witnessed a historic moment Monday with the signing of the Arms Trade Treaty, first adopted in April by the General Assembly, and the first time the 85-billion-dollar international arms trade has been regulated by a global set of standards.

Negotiations took place between 193 countries, 63 of which signed on Monday. More countries are expected to sign by the end of the week.

“We all know about history, so [the U.S. has] a big responsibility." -- Alex Gálvez of Transitions Foundation of Guatemala

The treaty will regulate all transfers of conventional arms and ban the export of arms if they will be used to commit crimes against humanity.

The treaty also calls for greater transparency and for nations to be held more accountable for their weapons trading. States will undergo rigorous assessment before they move arms overseas and have to provide annual reports on international transfers of weapons.

But some of the world’s major arms importers and exporters, whose inclusion is crucial for the treaty’s success, have abstained or declined to give their signatures. Syria, North Korea and Iran were the only three countries to fully oppose the treaty, while Russia, China and India abstained.

The United States, the world’s largest arms exporter, did not sign, but is expected to by the end of the year. Technicalities in the language of the treaty were the reason for not signing; while U.S. support for the treaty is “strong and genuine,” there were inconsistencies in comparison between the English-language and translated versions of the treaty, said Daryl G. Kimball, executive director of the Arms Control Association.

“All other countries are looking to what the United States does,” Kimball added.

Ray Offenheiser, president of Oxfam America, said it is “critical” that the United States sign the treaty, which has been “10 years in the making.”

In a statement released by the State Department Monday morning, Secretary John Kerry welcomed the treaty, ensuring that the U.S.’s signing would not infringe on the fiercely debated Second Amendment rights of U.S. citizens.

“We look forward to signing [the treaty] as soon as the process of conforming the official translations is completed satisfactorily,” Kerry’s statement said.

The treaty is a crucial step towards ending the deaths of the 500,000 people Oxfam estimates perish from armed violence each year.

“The most powerful argument for the [treaty] has always been the call of millions who have suffered armed violence around the world,” Anna Macdonald, head of Arms Control, Oxfam, said in a statement. “Their suffering is the reason we have campaigned for more than a decade,” she added.

When asked if the treaty could prevent atrocities like those which have occurred in Syria, Macdonald said she believed it could, if implemented correctly.

With such vast negotiations taking place, disagreements were bound to arise.

“Items [such as] the scope of weapons covered by the treaty and the strength of human rights provisions preventing arms sales in certain circumstances are not as strong as we would have wished,” Jayantha Dhanapala, president of the Pugwash Conferences on Science & World Affairs and former under secretary general for disarmament affairs, told IPS.

Nevertheless, he believes the treaty is a “long overdue step” in realising Article 26 of the U.N. Charter, which calls for the “establishment of a system for the regulation of armaments”.

And considering the treaty was adopted just weeks ago, 63 signatures is an “excellent number,” Macdonald said.

The treaty will go into force after it receives 50 ratifications from states that have signed. This is expected to take up to two years, but some states, including the United Kingdom, have agreed to already start enforcing the rules of the Treaty.

One victim of gun violence was at the U.N. to witness the signing, the first step on the path to the treaty’s ratification.

Alex Gálvez, 36, was 14 years old when he felt a bullet course through his right shoulder, exiting through his left one. Buying sodas for lunch in Guatemala, Gálvez was caught up in a territorial dispute. The bullet perforated his lungs, but Gálvez said he was too young at the time to realise that he was dying.

Gálvez is now executive director of Transitions Foundation of Guatemala, an organisation that helps Guatemalans living with disabilities, many of whom have been injured by small weapons.

“They left a lot of small weapons without control” after three decades of violence in Guatemala, Gálvez told IPS.

“Unfortunately not everyone had had the opportunity to get treated in time, to get educated [about arms],” Gálvez said. “It’s not just Guatemala that is suffering [from armed violence]; many other countries are suffering too.”

While he received his medical treatment in the United States and understands that it’s a complex process, Gálvez would like to see the country sign, especially as it has provided small arms to many countries, including his own.

“We all know about history, so they have a big responsibility,” Gálvez said.