UNITED NATIONS, Jun 26 2013 (IPS) - Bogaletch Gebre knows exactly what women in her Ethiopian community are going through. Along with her sisters, the women’s rights activist was a victim of female genital mutilation (FGM) when she was a child in a part of Ethiopia where the practise was carried out on every girl.

In 1997, Gebre and her sister, Fikrete, founded Kembatti Mentti-Gezzima-Tope (KMG), which means “women working and standing together”. For her work with KMG, Gebre won this year’s King Baudoin African Development Prize. 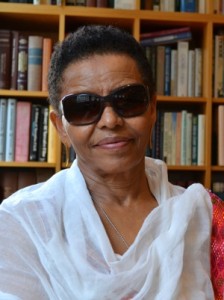 Gebre believes that a trifecta of issues – economic, societal and ecological – combine to oppress women, so KMG works on a range of issues, from improving infrastructure to encouraging communities to confront customary practises like bridal abduction and FGM, which it has helped to dramatically decrease.

IPS correspondent Lucy Westcott spoke to Gebre in New York about the practise of and attitudes about female genital mutilation, as well as the power of women’s economic independence.

Q: Your encouraging communities to discuss FGM and other taboo subjects has been called a rebellion. Do you agree with that label?

A: One of KMG’s aims is eliminating gender-based violence, which includes customary practises such as FGM, bride abduction and widow inheritance.

In 1998, when we did our baseline survey on FGM, we were touching taboo issues. So somebody called it a rebellion and me a renegade for touching things like that, because people do not dare to.

Q: Was it difficult to start talking about these issues? What was the culture like when you were growing up?

A: When I was growing up, body parts and anything taboo were not pronounced by girls – only by grandmothers, mothers and married elders. FGM is called “removing the dirt”.

I was awakened to the harmfulness of FGM because somebody took the time to explain to me that I didn’t have to go through it. When I underwent it, it was a celebratory event. Everyone was dancing and celebrating.

But my sisters, my mother, myself – we were crying, because they knew how harmful and painful it is. My mother said, “I wish they would do away with it.” She knew what was being done to her daughter, but she felt she was mandated, that this thing should be done in order to make her daughter acceptable and marriageable, and this is what the girls should go through.

Q: How did your organisation achieve such a decrease in FGM cases?

A: In 1998, we found that FGM was happening to 100 percent of girls in the areas where KMG worked in Ethiopia. Today, that is changing. We have reduced the FGM rate by 97 percent, according to UNICEF, so right now those rates are just under three percent.

What’s important is not just change through workshops, but also girls becoming social forces in the community. They’re organising clubs, going to school and passing exams. It’s not like it used to be.

We discovered that we didn’t know where FGM and other practises came from. We asked the elders, the community leaders, anyone who would know the myths, oral traditions and history of the area, but nobody can tell you where it comes from.

Q: When people realised that no one knew where FGM originated, did they change their minds or did they still want to hold on to tradition?

A: Nothing is automatic. It doesn’t change overnight, so we have continuous engagement as a community. We see change coming, individual behaviour changing and the community arguing among itself.

There’s no parent in the world that would knowingly hurt his or her children. That FGM is mandated by in their religion or culture is a misconception and misunderstanding that nobody has questioned.

When people start reasoning and questioning, there’s no answer to the question of why, so one person at a time, it stops. They’ve built their own contract, with the community punishing those who continue with the crimes.

Q: Is there a correlation between the decrease in FGM and the rise in opportunity for young women in Ethiopia?

A: We are not addressing just FGM through the organisation, but a whole array of social change. We’re helping to send girls to school, and we are improving economic opportunities for mothers. Women are establishing militias to protect each other and are accessing justice.

There is huge change taking place. Building roads and improving infrastructure is also a big part of what we do, as it helps women become economically independent.

Economic empowerment gives women a voice, confidence and also space and respect in the community. Once they start talking, there’s no stopping.