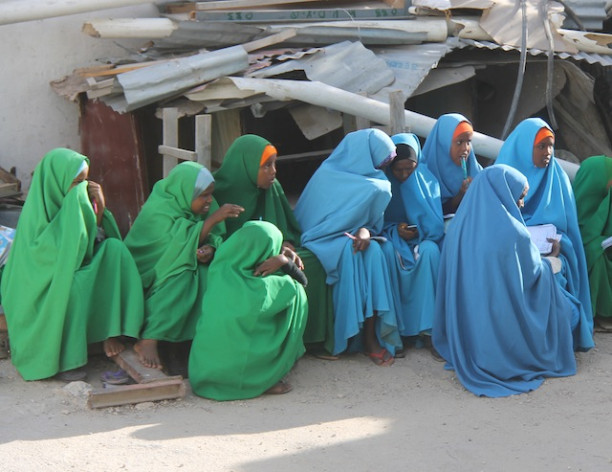 MOGADISHU, Jun 20 2013 (IPS) - Seven-year-old Istar Mumin lies on a bed, motionless, in one of the rooms of her family home in Mogadishu’s Hamarweyne district. She has just gone through the horrifying ritual of “the cut,” which was carried out by a local Somali nurse.

“I am in pain. I cannot move. They cut me,” a teary-eyed Mumin, who was visibly weak from the procedure, tells IPS.

Elsewhere in the house her mother, Muhibo Daahir, is in a celebratory mood as their family entertains guests who are here to celebrate Mumin’s circumcision.

The age-old practice of Female Genital Mutilation (FGM) is banned by the current Somali constitution. But it is still widely carried out, particularly in Somalia’s formerly war-torn areas, on girls as young as five — in the hope of keeping them pure and making them ready for marriage. Most families see the occasion as a time of happiness and festivity.

According to a United Nations Children’s Fund (UNICEF) advocacy paper titled “Eradication of Female Genital Mutilation in Somalia”, “FGM can have severely adverse effects on the physical, mental and psychosocial well being of those who undergo the practice.

“The health consequences of FGM are both immediate and life-long. Despite the many internationally recognised laws against FGM, lack of validation in Islam and global advocacy to eradicate the practice, it remains embedded in Somali culture.”

The paper also states “long-term complications include loss of libido, genital malformation, delayed menarche, chronic pelvic complications and recurrent urinary retention and infection. FGM victims are also prone to a number of obstetric complications because the foetus is exposed to a range of infectious diseases and faces the risk of having its head crushed in the damaged birth canal.”

However, there is no specific law against female circumcision, and the practice remains widespread in both rural and urban areas in this Horn of Africa nation.

Daahir is defensive when asked why she allowed her daughter to undergo circumcision.

“Our religion allows us to purify our daughters so that they can get married when they are mature. The government cannot stop us from practicing our religion,” Daahir tells IPS.

She says that her daughter, just like “other girls of this time,” was circumcised in the Sunnah form of circumcision prescribed by the Islamic religion.

This method involves the partial cutting of the clitoris. Another form of FGM practiced in Somalia is the Pharaonic form, which involves the complete removal of the clitoris and the labia minora and majora. The outer vaginal opening is also stitched closed, apart from a small opening that is left for urination.

Daahir says, however, that unlike in the past, a qualified nurse and not an untrained traditional circumciser carried out her daughter’s circumcision. Her point of view is widespread in the country’s capital.

But in regions of Somalia that have not been caught up in the country’s two-decade war, the practice has declined.

“Everyone now knows that in Somalia, the extreme form of FGM is frowned upon and Sunnah-circumcised women are keenly sought after by men for marriage.” -- Raho Qalif, Somali school teacher

In April, UNICEF released a survey based on interviews conducted in Somalia’s northern region of Puntland and the breakaway state of Somaliland, which showed that the practice of FGM has decreased. The survey, conducted in collaboration with local governments, found that 75 percent of girls aged between one and 14 have not been cut, in comparison with 99 percent of young girls who have undergone the procedure in other regions in Somalia.

According to UNICEF, the United Nations Population Fund–UNICEF Joint Programme, has engaged over 300,000 community members and stakeholders in discussions on abandoning FGM in Puntland and Somaliland.

Perhaps the reason the practice has decreased in the north is that the area has enjoyed relative stability over the past two decades, while the rest of the country was caught up in a clan-based civil war that began in 1991. Awareness campaigns and public education about the dangers of FGM could not be conducted in these volatile areas as they were in Somaliland and Puntland.

Attitudes towards FGM are changing. However, activists here tell IPS that Somali society is not abandoning the ritual but is instead adopting a less severe form of FGM known as Sunnah.

“Somalis are not leaving their girls uncircumcised, although they are not using the crude Pharaonic form of the practice but using Sunnah, which in comparison to the traditional one is non-invasive,” Halimo Ali, a social activist in Mogadishu, tells IPS.

Ali says she finds that people are now taking to the Sunnah form of FGM, in which less than five percent of the cut is done, compared to the Pharaonic form which “completely wipes out everything.

“I am aware of the study done in Puntland and Somaliland and it is encouraging. But I doubt that Somalis now will stop their daughters from being circumcised in one form or another,” she says.

Maryan Aalim is a mother of seven daughters.

“All of my daughters are circumcised in Sunnah, but the eldest was circumcised in the traditional way. I chose the Sunnah circumcision because that is the one allowed by Islam,” she tells IPS.

Sheikh Omar Ali, a senior cleric in Mogadishu, is one of the religious leaders people rely on when they want to justify the practice of FGM.

“There is only one form of circumcision that is prescribed by Islam and it is the Sunnah form. The Pharoanic form predates Islam and is un-Islamic,” he tells IPS.

“People now recognise the negative effects of the extreme form of FGM on women and girls and have adopted the Sunnah form. It is not what we want, yet it is a step in the right direction,” Raho Qalif, a school teacher in Mogadishu, tells IPS.

She says the practice will eventually fade out of Somali culture and notes a “trend,” saying that to circumcise girls in the Sunnah form has now become “fashionable.”

“Everyone now knows that in Somalia, the extreme form of FGM is frowned upon and Sunnah-circumcised women are keenly sought after by men for marriage,” says Qalif.