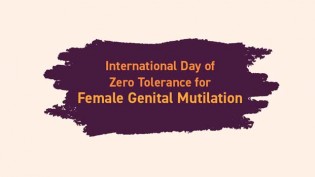 By Catherine Russell and Natalia Kanem
“Multiple overlapping crises are putting millions of girls at increased risk of female genital mutilation. “Countries already grappling with rising poverty, inequality and conflict are seeing the COVID-19 pandemic further threaten years of progress to end the practice, creating a crisis within a crisis for the world’s most vulnerable and marginalized girls.

By Baher Kamal
While male circumcision is spread mainly among Muslim and other religious communities, and it is apparently accepted by some medical spheres, more than 200 million girls have already fallen prey to a dangerous, abhorrent practice, which is carried out in the name of social and religious traditions: Female Genital Mutilation (FGM).

By Nimco Ali and Reem Abdellatif
The fate of Egyptian women and girls delicately hangs in the balance as the country continues to have one of the worst records in the world for gender equality. With oppression often state-sanctioned, Egyptian women face a daily struggle against sexual harassment and other violations of their basic human rights, including institutionalised violence.

By Mariya Salim
Survivors of female genital mutilation or cutting (FGM/C), are determined to share their stories to end this practice – even though they face ostracisation by their communities. Masooma Ranalvi, an FGM/C survivor and founder of ‘WeSpeakOut’, an organisation committed to eliminating FGM/C or khafd/khafz/khatna explains that FGM/C is practised by various communities in India but is prominently practised among the Dawoodi Bohras.

Female Genital Mutilation (FGM) poses serious risks to the health and well-being of women and girls, but it also exacts a crippling economic toll, according to the World Health Organization (WHO).

By Ruth Kagia and Siddharth Chatterjee
On 06 February 2017, the world marks the 14th International Day of Zero Tolerance for Female Genital Mutilation (FGM).

By Abdurrahman Warsameh
Seven-year-old Istar Mumin lies on a bed, motionless, in one of the rooms of her family home in Mogadishu’s Hamarweyne district. She has just gone through the horrifying ritual of “the cut,” which was carried out by a local Somali nurse.
Next Page »

Female Genital Mutilation FGM entails the ‘partial or total removal of the female external genitalia or other injury to female genital organs for non-medical reasons’ and is normally carried out between infancy and age 15. It has no health benefits, but immediate and long-term health consequences are numerous: including infections and abnormal scarring, debilitating pain, or death