The world marks International Women’s Day on Mar. 8 under the theme I am Generation Equality: Realizing Women’s Rights. IPS takes a look at the complex challenges facing African women. 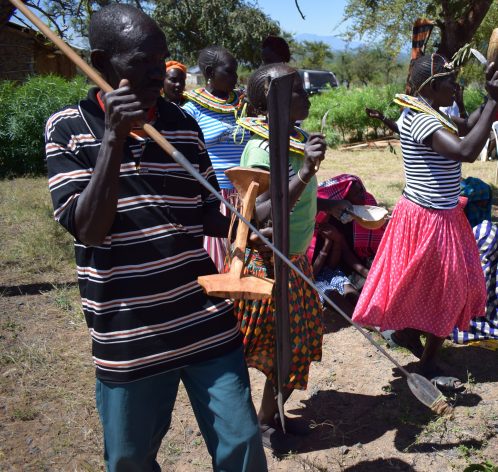 As a Pokot girl in Kenya undergoes Female Genital Mutilation (FGM), her father stands guard with spear at hand to ensure that the ritual goes as planned. FGM was outlawed in Kenya in 2011 but is still practiced among pastoralist communities. Credit: Miriam Gathigah/IPS

NAIROBI, Mar 6 2020 (IPS) - Pokot girls are expected to face the knife stark naked and with courage. To inspire confidence, their fathers sit a few metres away from them with a spear in hand.

It defies belief that young girls between the ages of nine and 15 could sit side by side, legs spread apart as one after the other their external genitalia is chopped off by an elderly female circumciser.

Lotiamak says that when it comes to payment of a bride price, a Pokot girl who has undergone FGM receives 60 to 100 cows, or on the lower side, 25 to 40 cows. Those not ‘cut’, even if university graduates, receive four to eight cows. But then again, very few make it to university.

Female Genital Mutilation (FGM) was outlawed in Kenya in 2011.

But the situation of women and girls in Kenya’s expansive West Pokot County, approximately 380 kilometres from the capital, Nairobi, is characterised by FGM, child marriages, and high maternal and child mortality rates.

Apakamoi Psinon Reson, a conflict mitigation expert based in West Pokot, says that FGM is closely linked to conflict and pastoralist communities, as those communities that enjoy relative peace have all but abandoned FGM.

Even as the world marks International Women’s Day on Mar. 8 under the theme I am Generation Equality: Realizing Women’s Rights, it is a long road ahead for Pokot girls and women.

“Whether in West Pokot, Baringo, Kerio Valley in the Rift Valley region or the northern parts of Kenya experiencing conflict over natural resources, livestock and poor leadership, women have no rights and are living very difficult lives,” Mary Kuket, the chairperson of the Baringo County chapter of Maendeleo ya Wanawake (Development of Women), a national women’s movement, tells IPS.

Northern Kenya has a long history of ethnic conflict and marginalisation, and now terrorism spilling over from neighbouring Somalia has intensified conflict in this region.

Reason argues that it is difficult to protect women and girls, and to enforce the law in these conflict situations.

“We have many pockets of heavily armed bandits in pastoralist communities who are happy to maintain a situation of lawlessness in these regions,” he tells IPS, adding that even after years of disarmament missions communities have not been fully disarmed.

Kenya, recognised as East Africa’s largest economy by the World Bank, is not among the top 10 Sub-Saharan African countries lauded for promoting gender equality, according to the Global Gender Gap Report 2020.

It ranks 109 out of 153 countries by the World Economic Forum based on progress made towards gender parity.

Kenya is outperformed by much smaller economies such as Rwanda, Uganda, Namibia, Zambia and Madagascar, all of which made it on the list of top 10 countries in sub-Saharan Africa for their notable steps towards gender equality.

But with the current pace of transformation, gender gaps in sub-Saharan Africa can only be closed in 95 years, according to the World Economic Forum.

South Sudan remains on the radar of human rights organisations since December 2013 when a fresh round of conflict began. The World Report 2019 released by HRW estimates that more than four million people have fled their homes.

Gender champion and executive director of the non-governmental Coalition of State Women’s and Youth Organisation in South Sudan, Dina Disan Olweny, explains the harmful and retrogressive traditions that prevail, particularly in some of the country’s more fragile states.

Regional clashes between the government and rebel forces resulted in crimes committed against civilians, including sexual violence.

“There is frequent conflict here over livestock and grazing fields. When a family loses a loved one, they expect to be compensated with livestock by the family that killed their loved one,” says Olweny.

“This compensation is called blood money because the affected family receives something for life lost. Those too poor to afford livestock usually give away one of their young girls,” she says. She says that at least five of the 12 tribes in this state continue to give away young girls as blood money.

The Central African Republic (CAR) remains a particularly fragile state as armed groups, which have expanded control to at least 70 percent of the country, continue to perpetrate serious human rights abuses — killing civilians, raping and sexually assaulting women and girls.

Similarly, Somalia is now defined by fighting and lack of state protection. Currently, at least 2.7 million people are internally displaced, many of them at risk of abuse such as sexual violence.

Women in Mauritania are not sufficiently protected by the law. According to the World Report 2019 “a variety of state policies and laws that criminalise adultery and morality offences renders women vulnerable to gender-based violence, making it difficult and risky for them to report sexual assault to the police”.

HRW has raised concerns that Mauritanian law does not adequately define the crime of rape and other forms of sexual assault. Nonetheless, a more comprehensive draft law exists.

Despite ongoing conflict, across Africa, women have made significant effort to participate in the labour force nearly on par with men. However, gender experts such as Olweny raise concerns over the wide gap between male and female professionals and technical workers.

She says that women remain marginalised and excluded from the economy because they are confined to unskilled work, and are working out of necessity to put food on the table.

The Global Gender Gap Report 2020 concludes that this is an indication that a vast majority of women are in poorly paying jobs within the informal sector.

“Across Africa, although in varying degrees, we are experiencing prevailing levels of discriminatory gender norms and practices. We still have alarming levels of violence towards women, and institutions that are too weak to address the plight of women,” Fihima Mohamed, the founder of the Women Initiative, a local social movement for the empowerment of women and girls in the republic of Djibouti, tells IPS.

She says that while more girls are enrolled in school, they are not staying long enough to acquire technical skills to engage in professional work.

“Our women therefore remain excluded from political and economic decision making. It is very unfortunate that, as a collective society, we are yet to realise that more gender-equal countries such as Norway, Finland and Sweden are also global economic powerhouses,” says Mohamed.

To realise gender equality in this generation, Mohamed called for a total outlawing of retrogressive traditions such as FGM, a renewal of efforts to keep girls attending school to the highest level, and incentives — such as tax exemptions — to support women in business.