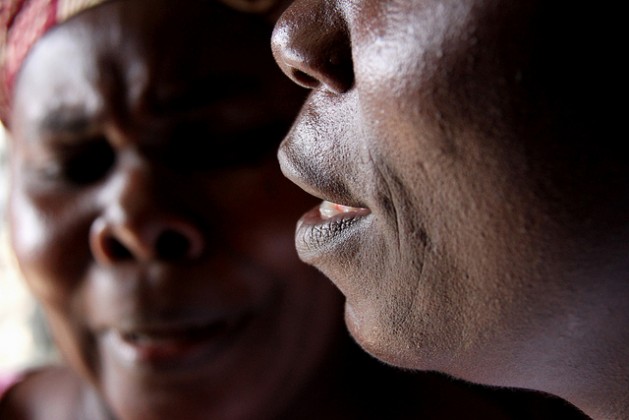 NEW YORK, Aug 5 2015 (IPS) - Jaha Dukureh knows firsthand the barbaric effects of undergoing female genital mutilation/cutting (FGM/C). Now a resident of the United States, she was mutilated as a baby in the Gambia in West Africa. Her sister bled to death after enduring the same procedure.

What was done to Dakureh is called “infibulation,” where the clitoris and the labia are removed and the vagina is sealed to insure a girl’s virginity until marriage.

"Policy makers, doctors, police, teachers and community leaders all have a role in making sure that girls can receive the help they need and deserve. There is no excuse for this type of abuse." -- Paula Kweskin

Now a passionate advocate against FGM/C, Dakureh issued a call to arms on the eve of President Barack Obama’s recent visit to Africa, urging him to “play a historic role in the fight to eliminate FGM.”

“While the origins of FGM are ancient and predate organised religion, there is one thing we know for sure: its purpose is to control female sexuality and lessen a woman’s humanity,” she wrote in a powerful commentary for the Guardian.

In the last 15 years, the number of women and girls at risk of FGM/C in the United States has more than doubled, advocacy groups warn, calling for stronger measures to prevent this human rights violation.

According to data from the Population Reference Bureau, a nonpartisan Washington, D.C. research group, a staggering 506,795 girls and women in the United States have undergone or are at risk of undergoing FGM/C.

“It’s important this subject is no longer taboo,” Paula Kweskin, a human rights attorney who produced a film called Honor Diaries that deals with the problem of FGM, told IPS. “It needs to be discussed at every level so that it can be addressed and eradicated. When it’s swept under the carpet, women and girls are revictimized by the silence and inaction.”

“Policy makers, doctors, police, teachers and community leaders all have a role in making sure that girls can receive the help they need and deserve. There is no excuse for this type of abuse.”

The top 10 metropolitan areas where girls and women are at highest risk of female genital mutilation include New York, Washington, D.C., and Minneapolis-St. Paul.

The PRB notes that FGM/C, which entails partial or total removal of the external genitals of girls and women for religious, cultural, or other nonmedical reasons, has devastating immediate and long-term health and social effects, especially related to childbirth.

Most girls at risk are in found in sub-Saharan Africa. In Djibouti, Guinea, and Somalia, for example, nine in 10 girls ages 15 to 19 have been subjected to FGM/C. But the practice is not limited to developing countries.

An estimated 137,000 women and girls in Britain have undergone the procedure, according to a report released in July by City University London and Equality Now.

In the United States, the PRB says, efforts to stop families from sending their daughters abroad to be cut — so-called “vacation cutting” — spurred the passage of a law in 2013 making it illegal to knowingly transport a girl out of the United States for the purpose of cutting.

She added that having specific laws in each state would prompt state schools, hospitals and clinics as well as local law enforcement agencies and the judiciary to step up prevention efforts and act swiftly in FGM cases.

“People in [the U.S.] don’t want to think it happens here. But their daughters might be sitting next to a best friend who can be subjected to a violent, cultural procedure,” she told NPR. “If it were cutting the nose or the ear off — something everyone could see — there’d be a different response. We can’t continue to hide this away.”

The U.S. Congress had already passed a law in 1996 making it illegal to perform FGM/C and 23 states have laws against the practice, which has grown in part because of increased immigration from countries where FGM/C is prevalent, especially in North and sub-Saharan Africa.

Between 2000 and 2013, the PRB says, the foreign-born population from Africa more than doubled, from 881,000 to 1.8 million. Just three sending countries—Egypt, Ethiopia, and Somalia—accounted for 55 percent of all U.S. women and girls at risk in 2013.

“This is a barbaric and completely unnecessary practice that causes devastating physical and psychological damage for countless girls and women in the United States and countries across the globe,” said Raheel Raza, president of the Council for Muslims Facing Tomorrow.

Raheel, a human rights activist, is among several Muslim women featured in Honor Diaries, a documentary breaking the silence on FGM and other abuse against women and girls in honour-based communities.