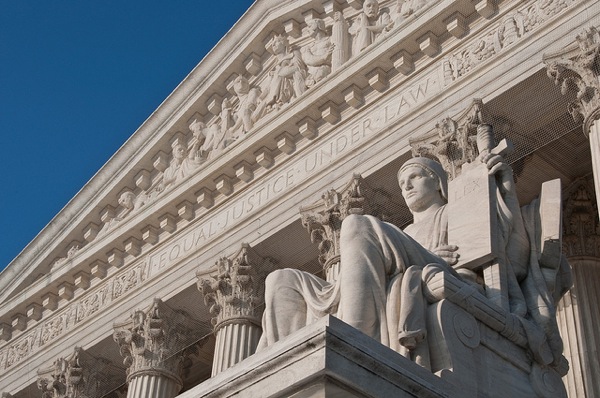 One of the key achievements of the Civil Rights Movement, the act was intended to address historical, entrenched racial discrimination in voting policies and practises.

Even though black people in the United States have ostensibly possessed the right to vote since 1870, under the 14th and 15th amendments to the U.S. Constitution, multiple federal civil rights acts were enacted in 1957, 1960, 1964 and 1965 to address discriminatory practises at state and local levels, including in elections.

Section 5 of the VRA of 1965 is one of the strongest enforcement provisions of the act. It requires that the U.S. Department of Justice pre-clear any changes to “any standard, practice, or procedure with respect to voting”, including district maps, in any of the “covered jurisdictions”, which include all or part of 16 states in the United States, mainly in the South. Section 4 defines what areas Section 5 covers.

"Hubris is a fit word for today's demolition of the VRA."
-- Justice Ruth Bader Ginsburg

The case, Shelby County, Alabama v. Attorney General Robert Holder, argued that, on its face, the 2006 Congressional reauthorisation of sections of the act was unconstitutional because it was based on historical data of racial discrimination in election practises that are no longer relevant.

A majority of the court agreed with Shelby County, arguing there is a “fundamental principle of equal sovereignty” between states that requires the federal government to treat states equally.

Section 5, the court wrote, “requires States to beseech the Federal Government for permission to implement laws that they would otherwise have the right to enact and execute on their own. And despite the tradition of equal sovereignty, the Act applies to only nine States (and additional counties)”.

The court also ruled the criteria defined in Section 4 – a history of discriminatory practises, along with a low level of voter turnout – were antiquated and no longer justified by current conditions, because of the very success of the act.

Voter turnout and registration rates in covered jurisdictions “now approach parity”, the court wrote, and minorities hold elected office “at unprecedented levels”. It added that discriminatory practises like literacy tests have disappeared and that blatant discrimination is rare.

Justice Ruth Bader Ginsburg blasted the majority opinion in her dissent, writing, “Hubris is a fit word for today’s demolition of the VRA.”

“In the Court’s view, the very success of [Section] 5 of the Voting Rights Act demands its dormancy… Throwing out preclearance when it has worked and is continuing to work to stop discriminatory changes is like throwing away your umbrella in a rainstorm because you are not getting wet,” she wrote.

“The question this case presents is who decides whether, as currently operative, Section 5 remains justifiable, this Court, or a Congress charged with the obligation to enforce the post-Civil War Amendments ‘by appropriate legislation,'” she wrote.

Ginsburg noted an current, ongoing problem of a second generation of tactics designed to dilute black voting strength, including redistricting practises and a move to change some elections to at-large voting.

Further, she argued that because Shelby County, the actual plaintiff in the case, clearly qualified for Section 5 coverage, that the court had overreached. “The Court’s opinion can hardly be described as an exemplar of restrained and moderate decisionmaking.”

“Congress approached the 2006 reauthorization of the VRA with great care and seriousness. The same cannot be said of the Court’s opinion today,” she wrote.

Voting rights and civil rights advocates are infuriated at the ruling and are scrambling to take action.

The National Association for the Advancement of Colored People (NAACP) already has a petition on its website calling on Congress to act.

Justin Levitt, associate professor of law at Loyola Law School, Los Angeles, told IPS that such a move may be more complicated and politically challenging than it sounds.

“The court… certainly left the door open. If Congress chooses to return to ‘where’ question [where preclearance should be required], it would have to articulate a set of jurisdictions and the reason for including those and not others responsive to facts on the ground,” Levitt said. “That’s really hard to do.”

“It’s like asking Congress to try to figure out and come up with…current measures for places that are most sick even though they’re taking medicine. Now we’re taking the medicine away and now Congress needs to show it needs the medicine,” he said.

Possible new criteria that have been discussed so far include a history of other voting rights litigation under other provisions of the VRA, the degree to which an electorate is racially polarised or levels of prejudice, he said.

As for the court’s disregard for Congress’s renewal of the act in 2006, “there is not a tremendous amount of consistency in the amount of deference other branches of government get,” Levitt said.

Other activists are looking for a more radical and fundamental change. Rashad Robinson, executive director of ColorofChange.org, said his organisation is pushing for a constitutional amendment guaranteeing the right to vote.

“The right to vote is not enshrined in our Constitution. There’s a host of different requirements and laws, everything from registration to ballot access, in different states,” Robinson said.

“We can continue to be on the defensive, or we can sort of advance a new framework for how elections should be run in this country, and that’s what we’re doing here,” Robinson told IPS.