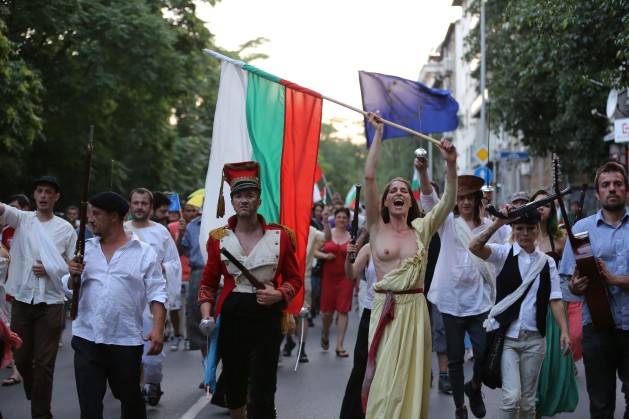 French support for the protests in Bulgaria has inspired street scenes to recreate the iconic painting by Eugene Delacroix to mark the revolution in France in 1830. Credit: Vassil Garnizov/IPS.

WARSAW, Jul 29 2013 (IPS) - For more than six weeks now, Bulgarians have been on the streets demanding an end to oligarchy and corruption.

Under the label DANSwithme, inhabitants of Bulgarian capital Sofia have been taking to the streets every day since Jun. 14. The protests were sparked by the Socialist government’s decision to appoint 32-year-old media mogul Delyan Peevski head of the national security services (DANS).

Despite Peevski’s snap removal following the public outcry, Bulgarians have continued protests to demand resignation of Prime Minister Plamen Oresharski. On peak days, crowds are in the tens of thousands.

Urbanites, often youth and professionals, have vented their anger and also celebrated the rather new experience of street action. They are a colourful bunch, bringing along kids, often wearing theatrical costumes, using art installations to send political messages, and broadcasting it all on social media.

As if to reflect participants’ desire for a well-functioning society, people have gathered in the centre of Sofia in the mornings “to have a coffee with parliamentarians” (coffee cups were collected as proof of participant numbers) and then gone to work. In the evening, they have returned to the streets, for more elaborate marches and performances.

Remarkable for their endurance, size and creativity, the protests represent the culmination of public resentment with a political class perceived to be closely tied to business and crime groups, and with dysfunctional democratic institutions.

In Bulgaria more than in other post-socialist members of the European Union, a nexus between organised crime, businesses and the political class cemented in the early 1990s remains a feature of public life. The country is also the poorest of EU member states.

Over the past years, Bulgarians have been reacting. Environmentalists often took issue with the sell-off of natural parks or pristine beaches for tourism or sports projects by prominent business figures with a murky reputation.

It took until February this year, however, for the discontent to boil over. At the start of 2013, Bulgarians were on the streets for weeks complaining about rising electricity and heating costs, and calling for re-nationalisation of the energy system.

Those protests were led by the poor who could not afford to pay the heavy bills. There were several public suicides in cities across the country during the weeks of action.

The protests were backed by others frustrated with Bulgaria’s ruling class. The centre-right government of Boiko Borisov resigned as a result.

Following elections in May, Bulgaria is now run by a coalition of Socialists and the Movement for Rights and Freedoms (a maverick party representing the country’s Turkish minority which usually allies with winners of elections to form governments). Further support from the far-right party Ataka was needed to form this government.

“The situation is very unstable at the moment, with pressure on the government increasing all the time because recently even trade unions expressed their support for the protests,” Ivan Krastev, chairman of the Sofia based Centre for Liberal Studies tells IPS. “The question seems to be no longer if but when we will have early elections again. This government has clearly lost its ability to govern.”

On Tuesday last week (Jul. 23), the protests turned tense for the first time. Crowds blockaded the parliament in the evening, trapping politicians gathered for an extraordinary session to vote amendments to the budget. Those amendments sought an increase in budget deficit to finance outstanding debts to private contractors and some social spending.

Oresharski is refusing to resign, promising that the government has “a clear plan of stabilisation” and plans “urgent measures to improve the social situation.” No details were given.

President Rosen Plevneliev has meanwhile been expressing sympathy for the protesters.

As have representatives of the EU and its member states, including EU Commissioner for Justice Viviane Reding and the French and German ambassadors to Sofia. Unlike Greek or Spanish protesters targeting the EU as a main driver of austerity measures, many of the Bulgarians on the streets today still hold on to EU ideals.

Thankful for the supportive French and German ambassadors, protesters have been putting on live re-enactments of French painter Eugene Delacroix’s canvas Liberty Leading the People (strongly associated with the French Republic) and of the fall of the Berlin Wall.

The French painting became iconic of the July revolution of 1830 in France. In the painting a woman personifying Liberty leads people holding up the French flag. The scene is being recreated in Sofia inspired by French support for the protests.

“In a way, these protests are producing an ideology that fits fully into the master signifiers of the post-socialist transition: anti-politics, technocratic experts, civil society, transparency, anti-communism, free market competition (an economy free from the meddling of the political class which is considered to be conducive to the mafia) – as the timing of the protests suggests,” Jana Tsoneva, a doctoral candidate from the Central European University attending the protests tells IPS.

Tsoneva adds that this mindset that distinguishes the Bulgarian movement from Greek or Turkish protests or the Occupy movement, is not necessarily shared by all participants but promoted by more prominent figures.

“As compared to the protests in February which were much more critical, for example in the stance towards foreign investors, these ones have a much more typical modernisation agenda,” Ivan Krastev tells IPS.

“Unlike in other places, like Greece, where people protested the European project, Bulgarians see Brussels as a natural ally. Therefore, officials in Europe are able to side with protesters against elites, not vice-versa.”

Both caution against symplifying the reading of these protests by linking them to one agenda or one class.

“We see on the streets people who are much more on the left, anti-capitalist, people who in the West would join Occupy, but also people with more classical liberal views who say liberals never got a chance because of the oligarchs,” adds Krastev. “This is an interesting coalition and it is interesting to see on what they agree and disagree.

“It is important that we are witnessing a big process of politicisation of the middle class and youth,” he adds, “even though the weakness of the broad, classical civic agenda of the protests is that it is unclear whether any political party can emerge from them.”