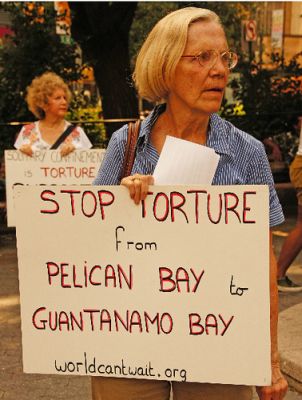 As of Monday, 986 inmates in 11 California state prisons were considered to be on hunger strike, according to the state Department of Corrections and Rehabilitation (CDCR). Starting on Jul. 8, some 30,000 inmates in 33 jails began refusing food in protest against what they describe as the inhumane use of long-term solitary confinement.

Although this is the third such hunger strike in the California prisons since 2011, the current situation has involved more inmates and gone on for longer than previous such protests. The five central demands of the current strikers can be found here, foremost among which is ending long-term solitary confinement, which has constituted a key part of the state’s crackdown on prison gangs.

In attempting to stem the current strike, CDCR officials have recently stepped up a disciplinary campaign, including placing striking prisoners in even more restrictive isolation. Amnesty International, a watchdog group, is now warning that the CDCR has “breached international human rights obligations by taking punitive measures against prisoners on hunger strike over conditions”.

“Prisoners seeking an end to inhumane conditions should not be subjected to punitive measures for exercising their right to engage in peaceful protest,” Angela Wright, a U.S. researcher for Amnesty International, which has previously offered extensive reporting on the California prison system, said Monday.

Wright’s colleague Justin Mazzola told IPS, “At this point, further restricting these prisoners violates their right to challenge this treatment, placing them in a situation that is even less accountable than the indefinite isolation they’ve previously experienced. Placing prisoners in even more restrictive settings shouldn’t be the response to what they’re doing: calling attention to the conditions in which they’re being held, as well as to proposed reforms.”

On Jul. 11, CDCR officials released a statement noting that it is a violation of California state law for inmates to participate in any “mass disturbance” or refuse a work assignment. Any participating inmate would thus be disciplined by being placed in an “administrative segregation” unit, the statement warned.

Hunger-strikers have since suggested that prison officials have engaged in “retaliation”, including being put in the more restrictive administrative segregation, which the strikers say includes “more torturous conditions” than their previous isolation. Activists have also previously alleged that strikers are experiencing limits on their correspondence with lawyers and the confiscation of certain personal effects.

“Bear in mind that in prison you don’t have the same right to expression as in the outside world – that’s the point of prison, it’s a sanction for criminal behaviour,” Jeffrey Callison, press secretary for the CDCR, told IPS.

“That being said, the prisoners do have the ability to make known their concerns about conditions. There are formal mechanisms by which to file complaints, which are all read. Whenever a prisoner raises a legitimate issue, it’s fixed.”

Callison says that reports that striking inmates have had their legal access limited are false, stating that only a single lawyer has been temporarily barred from entering the Pelican Bay detention centre, where the current strike began, though the reason for this is confidential. He also notes that another allegation – that prisoners have been “blasted with cold air” at the PelicanBay facility – is impossible given that the centre has no air conditioning.

California has relied on an aggressive programme of “isolated housing” since the 1980s, after experiencing the growth of some of the United States’ first and most notorious prison gangs. In an attempt to neutralise the gangs, inmates thought to be gang members were moved to isolation in so-called Special Housing Units (SHUs).

Yet critics have pointed out problems with a system in which inmates could be put in isolation merely upon being accused of gang affiliation by another inmate. Further, until a pilot project was implemented last year, those accusations could not be challenged and the identity of the accuser was kept secret.

Today, around 12,000 inmates are reportedly being held in isolation at any given time, with hundreds of inmates having been in indefinite isolation for the past decade or more, according to advocates. Inmates in solitary confinement in California receive around an hour of outdoor time per day and no direct human contact.

Multiple groups contend that indefinite isolation constitutes cruel and inhumane treatment, and thus breaches international rights obligations. That view has been corroborated by the United Nations, whose special rapporteur on torture, Juan Mendez, in 2011 stated that solitary confinement of longer than 15 days should be “absolutely prohibited” due to its scientifically proven potential for lasting psychological damage.

Last week, the Inter-American Commission on Human Rights (IACHR) reiterated its support for this stance, expressing its “concern” over the causes behind the California hunger strike and the “excessive” use of solitary confinement in the United States more generally.

“The IACHR reiterates that the prohibition of torture and cruel, inhuman, and degrading treatment may not be abrogated and is universal,” the said. “Accordingly, the [Organisation of American States] Member States must adopt strong, concrete measures to eliminate the use of prolonged or indefinite isolation under all circumstances.”

The 35-member Organisation of American States, based in Washington, includes the United States.

The years of protest against the SHU system did eventually receive a policy response from the California prison system, including recognition that the gang-affiliation accusation system was dangerously inflexible.

In October, the CDCR instituted a series of initial reforms, including a “step-down” process for inmates who show they’re no longer engaging in gang-related activities. Through late June, the CDCR says it has reviewed some 382 cases, transferring 208 inmates out of SHUs and placing another 115 inmates in the step-down programme.

Still, critics suggest that the programme is too protracted, particularly for inmates who may have been in isolation for a decade or more.

“As it’s currently set up, it would take almost two years before an individual who starts the programme would even be taken out of the SHU. So that doesn’t really address the basic concerns here.”

Meanwhile, a class action lawsuit, filed in May 2012 on behalf of several SHU inmates, is scheduled to be heard in early August.