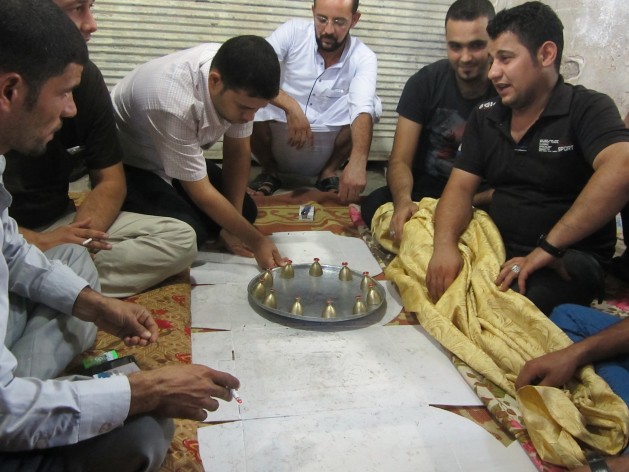 A traditional ‘tray and cup’ gambling game in Kirkuk that extremists have been targeting. Credit: Karlos Zurutuza/IPS.

KIRKUK, Iraq, Jul 31 2013 (IPS) - Two teams struggle to find an olive under one of the 11 cups displayed on a tray. The traditional game sin-u-serf  (tray and cup in Kurdish) is only played during the Muslim fasting month. In one of Iraq’s most violent cities, it is nothing less than a challenge to death.

“Every night we block the entrance of the street with our vehicles to protect ourselves against car bombs and the like. There are also several policemen in plain clothes among us,” says Haukar, the owner of this teahouse in Kirkuk’s northern district Sorja. Around 50 have gathered here to play the game after ending the daylong fast.

Disputed by Arabs and Kurds, this oil rich city 230 km northwest Baghdad remains in limbo between control from Erbil, administrative capital of the Kurdish Autonomous Region of Iraq, and Baghdad.

A referendum originally scheduled for November 2007 would have decided if Kirkuk was to integrate with the Kurdish north or stay under the Arab south. But measures meant to counterbalance the Arabisation campaigns under former president Saddam Hussein before the vote are yet to be taken.

"In Kirkuk we never get to know who will make you never make it home again.” -- Abu Bakr, local taxi driver

Suicide attacks and target killings continue meanwhile. On Jul. 12 a car bomb killed 38 people in a gambling place like this one. According to the Iraq Body Count database, July has been the deadliest month in 2013, with a death toll above 800.

“Of course I’m afraid of going out at night, but my choices are either to stay at home or to move somewhere else in Iraq. And I do not want to leave Kirkuk,” says Wasta, one of the players. His team-mates nod.

Violence always spikes in Iraq during the Muslim holy month, currently under way. Iraqis gather outside in the evenings, lounging in cafes and bazaars after praying in mosques, all easy targets for mass violence.

Some al-Qaeda affiliates believe that any violent activity will gain them spiritual benefits during the Ramadan fasting.

“Who cares? No one knows when their hour will come,” says Abu Ahmed, who has just found the olive only after a third attempt. Meanwhile, cups of tea and glasses of blackberry juice circulate among those watching, like Abdul Kadir Jiand.

“After the withdrawal of the Americans in December 2011, Kirkuk became a stronghold for both al-Qaeda and Saddam Hussein’s loyalists,” says Jiand, local head of Goran, a political party that seeks to break the prevailing bipartisanship in the Kurdish Autonomous Region of Iraq and seek reforms of a system where tribal loyalties are dominant.

“Kirkukis and Iraqis as a whole are the plain victims of the struggle between political parties supported by foreign forces,” says Jiand, struggling to reise his voice above the back-up generator behind him.

“Iran is backing the Shia coalition in power in Baghdad while Sunnis are getting support from the Gulf countries. Suicide bombings are al-Qaeda’s clear signature but we also get roadside bombs and target killings.”

Kirkuk police commander Khabat Ali Ahmed also speaks of the hand of al-Qaeda. Saddam Hussein’s loyalists in Kirkuk, he says, are grouped around Jaysh Rajal al-Tariqah al-Naqshbandia, an insurgent group that first announced armed operations in December 2006 in response to the hanging of Saddam Hussein.

“The political crisis in Iraq and the war in neighbouring Syria have turned Kirkuk into a stronghold for foreign jihadists and local Baathists who are supporters of the ousted regime,” Ahmed tells IPS. The officer confesses he is “far from optimistic” over Kirkuk’s security situation in the short term.

“We are already building a trench around Kirkuk to prevent further attacks, but the only realistic solution is to put this city under Kurdish administration and turn the trench into a high wall like the one around the Gaza strip.”

Back in Haukar’s teahouse there are more opinions about Kirkuk’s endemic violence than there is interest in the game.

“Both the opposition and the government are behind this [violence] – but not just Baghdad’s; Erbil’s too,” says a player who asks to be identified only as Mohamed. “Destabilising the city is the only way to prevent it from being under the control of a rival faction. This is a big game where nobody’s hands are clean.”

Mohamed, a former activist against Saddam Hussein, says he rejected a high-ranking position in the Kurdish administration due to “the rife corruption and dark manoeuvres” among many of his former colleagues who became Kurdish government officials over the last years.

Mohamed’s testimony matches that of Farid [not his real name]. This young man in his mid-twenties quit his career as a journalist after his colleague Soran Mama Hama was gunned down in July 2008. Hama had published an article on a prostitution scandal naming police officers and government executives.

“Soran and I would often work together,” recalls the young Kirkuki. “I quit after I received threats from the Kurdish Democratic Party, the leading coalition in Iraq’s Autonomous Region. He didn’t.”

Well after midnight, Haukar starts piling up cups and trays, after people start slowly leaving for home. Those heading for the Arafa neighbourhood, northwest of the city, look for alternative routes to the jam blocking Sorja’s main avenue.

Abu Bakr, local taxi driver, turns off the engine and lights a cigarette with resignation. “It can be anything,” he says. “From a routine police check to a car bomb. But worst of all is that in Kirkuk we never get to know who will make you never make it home again.”