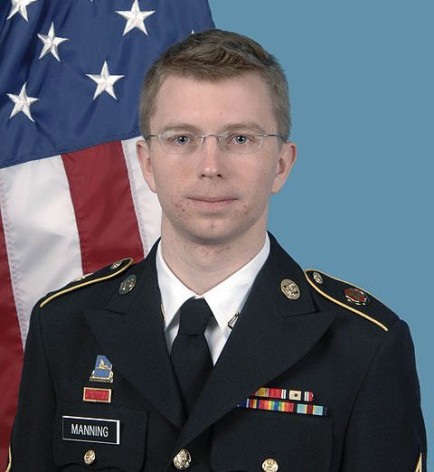 WASHINGTON, Jul 30 2013 (IPS) - A U.S. military judge ruled Tuesday that Private Bradley Manning, the young soldier who shared a mountain of classified data with the rogue pro-transparency group WikiLeaks, is not guilty of “aiding the enemy”.

He was found guilty, however, of a host of other charges which together could carry a punishment of up to 136 years in prison.

The verdict was read at 18:00 GMT by Colonel Denise Lind, the judge who presided over the trial held in a military court in Fort Meade, Maryland. It was met by ambivalence on the part of those who support Manning.

“I’m greatly relieved that Bradley was found not guilty of aiding the enemy…but I am completely outraged that he may be condemned to what could be tantamount to a life sentence for making government abuses known,” Nathan Fuller, who works with the Bradley Manning Support Network, told IPS.

The crimes Manning was found guilty of include five espionage charges and five theft charges.

Manning’s convictions stem from his decision to download a trove of classified data from U.S. Army computers and share it with WikiLeaks. The latter made the data public, causing a scandal which reflected poorly on U.S. military and diplomatic apparatuses.

“[Manning] is not a whistleblower or a hero. [His leaks] tarnished the image of the U.S. at a sensitive time,” Steven Bucci, director of the Foreign Policy Center at the Heritage Foundation, a right-wing think tank here, told IPS.

Bucci said that Manning acted illegally in releasing the data and this negates his claim to be a whistleblower.

Most notorious of the data released was the video file titled “Collateral Murder”,  which contained footage taken by a U.S. Army helicopter crew as it gunned down a group of Iraqis standing on a Baghdad street and continued firing as people nearby attempted to rescue them with a van.

Two of the initial targets turned out to be journalists working for Reuters. The van used for the rescue attempt also held two children, who suffered injuries.

Narration by soldiers engaged in the attack makes it sound as if they are enjoying the killing.

“On the video you can hear soldiers laughing about children being brought into battle,” says Fuller.

Fuller says that Manning released the unclassified video after learning that Reuters’ attempts to access it had been blocked.

In addition to the video, the data leaked by Manning included 470,000 battlefield reports from the wars in Iraq and Afghanistan, along with 250,000 State Department diplomatic cables.

Prosecutors argued that in illegally offering up the data, Manning acted as a “traitor” and knew he would be making crucial information available to enemies of the U.S.

Of the 22 crimes he was charged with, Manning pleaded “guilty” to 10 of the lesser ones but “not guilty” to the most substantial charge of aiding the enemy.  This most serious charge can be a capital offence, but prosecutors declined to seek the death penalty in Manning’s case, settling instead to pursue a life sentence.

There was never much chance that Manning would get off scot-free. The charges to which he pleaded guilty alone carried penalties of up to 20 years prison time.

His defence presented him as a naïve whistle-blower who broke the law in order to serve what he believed to be the greater good. It denied the prosecution’s assertion that he acted as a traitor out to undermine U.S. war efforts.

A message sent by Manning was cited as evidence of his noble intent.

“If you had free reign over classified networks over a long period of time,” Manning wrote in an internet chat with the man who would eventually turn him in, “if you saw incredible things, awful things, things that belonged in the public domain and not on some server stored in a dark room in Washington, D.C., what would you do?”

At the pre-trial hearing where he made his pleas, however, he was asked by the judge if he knew what he had done was wrong.

“Yes, your honour,” he replied.

Hoping to change the world

Despite the illegality of Manning’s actions, many in the U.S. protested for his release. Some activists advocating on his behalf believe the overall effect of his leaks was positive.

Outside the U.S., as well, demonstrators in scores of cities voiced their support of Manning.

“The people who have come out in support know he did something brave and selfless to inform them about corrupt U.S. policies. It had an effect on the entire world,” says Fuller.

One of those supporters, Deb Van Poolen, an artist who attended the trial and sketched Manning, says she is “inspired” by him.

“He was really hoping to change the world for the better,” Van Poolen told IPS.

The artist was dismayed by the fact that Manning had been held for three years prior to his trial, saying it violated his right to a speedy trial and calling it “completely ridiculous”.

Sentencing for Manning will take place during the month of August and is expected to take at least two weeks. The range of prison time Manning could receive is vast, and the possibility remains open that he will escape with little prison time.

After his sentencing the case will remain open to appeals.

Heritage’s Bucci, who believes Manning to be the “biggest spy [the U.S. has] ever had”, believes that a harsh sentence will do much to dissuade people with inside access from making similar illegal leaks.

“People have to understand,” Bucci explained to IPS, “that if you accept a top-secret clearance you have to abide by the rules, and, if you don’t, there is going to be a price that has to be paid.”

But the Centre for Constitutional Rights, which represents WikiLeaks and its founder Julian Assange in the U.S., said in a a statement Tuesday, “Manning’s treatment, prosecution, and sentencing have one purpose: to silence potential whistleblowers and the media as well.

“While the ‘aiding the enemy’ charges (on which Manning was rightly acquitted) received the most attention from the mainstream media, the Espionage Act itself is a discredited relic of the WWI era, created as a tool to suppress political dissent and antiwar activism, and it is outrageous that the government chose to invoke it in the first place against Manning.”