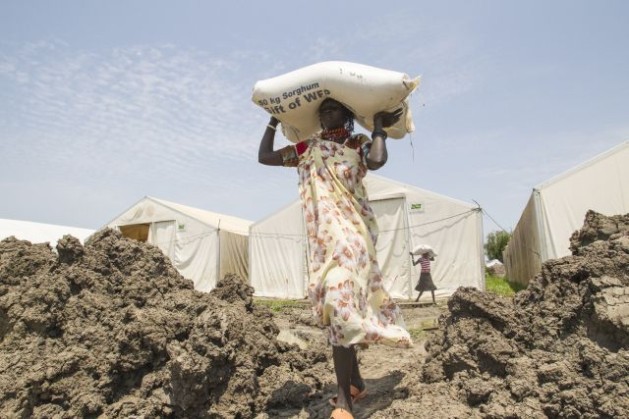 WFP has launched an operation including the use of helicopters to bring urgently-needed food assistance to tens of thousands of people who have fled to hard-to-reach areas to escape violence in Pibor County, Jonglei State. Credit: UN Photo/Martine Perret

UNITED NATIONS, Jul 26 2013 (IPS) - Following fighting in the South Sudan state of Jonglei , the United Nations is trying to coordinate a humanitarian effort to help tens of thousands of people who have fled to the bush. The World Food Programme (WFP) has launched an operation to provide food for those who have escaped the conflict.

“We believe these people need food now and cannot wait for much longer after hiding in the bush for weeks,” said Chris Nikoi, WFP South Sudan country director, in a statement on Tuesday.

The agency is requesting 20 million dollars to fund emergency assistance for 60,000 people through December.

“The Lou Nuer have a longstanding grudge against the Murle, which of course is a two-way street,” Sudan expert Eric Reeves told IPS. “But over the past years these tensions have come to a boil and mutual retaliations are extremely violent.” Retaliation is often in response to cattle looting by neighbouring communities, he said.

It has proven difficult for humanitarian groups to gain access to the large number of people who have been affected by the conflict in the state, South Sudan’s largest, in part because of the fighting and in part due to the lack of passable roads.

John Tzanos, who heads the MSF team in Pibor County, said in a statement, “They [civilians] are afraid to seek medical care in towns so it is essential for us to intervene where they are so that all those in need can access treatment.” With the latest wave of violence over, there is still no word on the number of casualties.

“We don’t have any figures [on fatalities] at all,” the acting humanitarian coordinator of the U.N. Office for the Coordination of Humanitarian Affairs (OCHA) in Jonglei, Dr. Yasmin Haque, told IPS.

“The challenge has been access, and now we have been able to secure additional funding which has improved our air transport capacity. We have also had a strengthening and better communication in getting security clearances and information in getting our flights to those areas.

“The biggest need is going to be food, and getting the amounts required into the areas is going to be many trips over many days,” she said. Haque said U.N. agencies were working with the government, especially the Relief and Rehabilitation Commission, and were also coordinating aircraft with the army, the SPLA.

“People have been afraid to return to the more populated areas where they have been [living],” she said. “Fear of insecurity and fighting is keeping people away from the main county locations.”

Another spokesperson for OCHA told IPS, “We have already begun to register the people displaced, and have begun to distribute household items and emergency shelter to people who have been living in the bush, exposed to the elements.”

OCHA has appealed for more resources from the international community, and noted that during the rainy season, which lasts from May to October, up to 90 percent of roads in Jonglei state are inaccessible, so aid must be delivered by air.

There are also allegations that the Sudanese government in Khartoum has been exacerbating the conflict by supplying rebel Murle leader David Yauyau with weapons.

The difficulty in tracking Yauyau’s rebels has made it hard for U.N. agencies to keep the peace and supply civilians with necessary aid. Yauyau’s current rebellion has been running since April 2012, for what he claims to be the rights of the Murle.

In an interview last year, Yauyau said, “This time around, we are fighting for the people of South Sudan, the minority communities like the Murle and the others…They don’t have a voice… they don’t have rights to live on the land. We don’t have a voice in the government. We are struggling together with them and we’ve lost some of our sons.”

There are also allegations of human rights abuses perpetrated by the government.

In an open letter to the government written in June, Reeves and three other signatories said that “over the past several years – but the last six months in particular – South Sudan government security forces have engaged in a campaign of violence against civilians simply because they belonged to a different ethnic group or they were viewed as opponents of the current government.”

The U.N. has also condemned the government for what it calls “serious human rights violations” allegedly committed by elements within the South Sudanese Army in Pibor County.