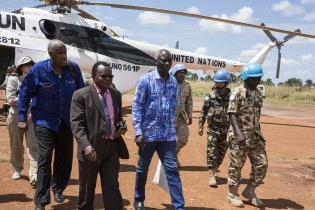 By Susan Robens-Brannon
In the remote, dusty and barren area of northern Port-au-Prince, Cannon Camp houses nearly 6,000 displaced Haitians in tiny and cramped spaces. Nestled among the smattering of tents is the home of a 50-something-year-old mother of 12.

By Jim Lobe
Civil conflicts in four African nations helped push some 800,000 people to seek safe haven in foreign countries during 2011, according to the annual report of the United Nations High Commissioner for Refugees (UNHCR), released Monday.
ADVERTISEMENT ADVERTISEMENT