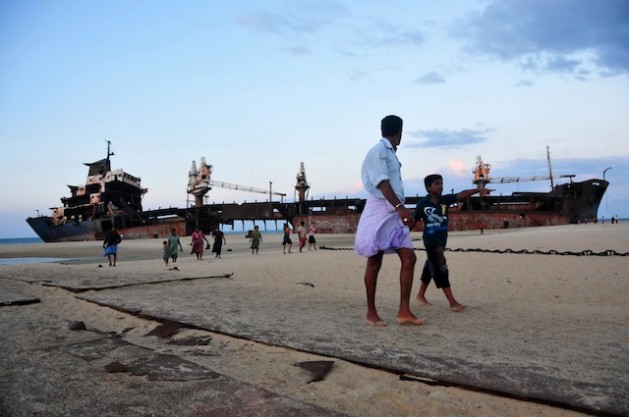 Tourists from southern Sri Lanka walk past the gutted remains of the Jordanian cargo vessel Farah III, which was commandeered by the LTTE. Credit: Amantha Perera/IPS

MULLAITIVU, Sri Lanka, Nov 24 2012 (IPS) - The tour guide’s voice echoes around the dark, musty room, three stories underground. Fifty visitors – among them mothers holding infants, youths snapping pictures on mobile phones and grandparents leaning against the walls – are crammed into the narrow stairwell that leads down into the chamber, listening attentively to his every word.

The tourists have travelled hundreds of kilometres to see this underground bunker, once home to the most feared man in Sri Lanka: the leader of the separatist Liberation Tigers of Tamil Eelam (LTTE), Velupillai Prabhakaran.

Located a short drive south of the town of Puthukkudiyiruppu, a former LTTE operations hub in the northern Mullaitivu District, some 330 kilometres from the capital Colombo, the bunker complex is nestled deep within the jungle.

The massive compound boasts a firing range, a semi-underground garage, a jogging path, a film hall and a small funeral parlor where the Tiger leader paid his final respects to fallen cadres.

“This is out of this world, how did they ever build something like this?” a woman who gave her name as Ranjini asked while walking down the narrow stairs.

Other attractions on the tour of former rebel-held areas include the shipyard where the Tigers experimented with building submersibles, complete with a dry dock and the skeletal remains of the Farah III, a Jordanian cargo vessel that was commandeered by the LTTE.

What is sidelined, however, are details of the beleaguered Tamil population that lived in this region throughout 30 years of civil war, and is now struggling to survive.

The Sri Lankan military came across the bunker complex after the Tigers were defeated in May 2009, signaling the end of a three-decade-long civil war in which the LTTE fought the Sri Lankan government for control over the north and east of the island in order to establish a separate state for the minority Tamil population.

Puthukkudiyiruppu and Mullaitivu, once the central command headquarters of a massive guerilla operation, now play host to thousands of visitors, mostly from the majority-Sinhalese southern regions of the country.

But while these guided tours offer locals a rare glance into the inner workings of the Tigers’ de facto state and the extent of its former military capacity, rights activists fear that many tourists are missing the “bigger picture” – the horrors of the aftermath of the war and the suffering that has become an everyday experience for tens of thousands who were displaced during the last bouts of fighting.

“I feel the (tourists) don’t have sense of what really happened here, or they don’t want to know,” Ruki Fernando, a rights activist who formerly headed the Human Rights in Conflict Programme at the national rights body, the Law and Society Trust, told IPS.

The facts surrounding the final stages of the war have been hotly contested in and outside the country: local rights groups, international humanitarian observers and aid workers claim at least 40,000 were killed, while the government insists that figure is closer to 7,000.

An internal review of the United Nations’ actions in Sri Lanka during the last phase of the war, released in early November, has reignited the furor over what happened here during the first half of 2009 and who was responsible.

The government has maintained a firm line that the Tamil civilians caught in the crossfire of the conclusive battle were “rescued” in a humanitarian operation and moved to safety in government “welfare camps”, while U.N. officials and aid workers classified this process as mass incarceration of Tamil civilian survivors in open-air detention centres, in violation of international law.

These unresolved questions are now being sidelined as the tourists arrive in droves, intent on one thing only – seeing as many of the war relics as possible, according to Saroja Sivachandaran, head of the Centre for Women and Development, a gender-based rights group in northern Jaffna.

“They fail to see that they are travelling through an area of absolute destruction where thousands still live in makeshift shelters,” she told IPS.

Some 450,000 displaced people, including around 236,000 who were rendered homeless during the last months of the war, are only now returning to their home villages in the north, even though basic amenities are still scarce in the region.

So far, just 21,000 permanent houses have been constructed for the roughly 170,000 still in search of homes.

The latest U.N. situation reports warn of serious funding shortfalls for rehabilitation work, a bleak forecast for the displaced.

Prashan de Visser, president of the national youth movement ‘Sri Lanka Unites’, told IPS that the gulf between visitors and those living in the former war zone stems from language barriers and a long history of cultural and social.

Sri Lanka Unites has engaged its island-wide base of 10,000 members to breach the ethnic divides, but there is still a long way to go since misconceptions are deeply “ingrained in the (social) system”, de Visser told IPS.

Sri Lanka Unites organises field tours and conferences for youth from all over the island, and for members of the vast Sri Lankan diaspora. Its main annual event, the Future Leaders’ Conference, was held in Jaffna this year, brining over 10,000 youth together for a week of activities.

During these intimate interactions, de Visser said, youth from different ethnic groups begin to see through the cultural and social barriers that have held them apart for so long.

This year, a group of youth leaders from the southern-most district of Hambantota pledged to raise 300,000 rupees (about 2,300 dollars) for work in the north after taking a field tour of the war-affected areas.

But most of the visitors flocking to the region are unlikely to make similar pledges.

Fernando warned that ‘gawking tourists’ will only reinforce ethnic divides instead of bridging them.

“This is still a massive curiosity park for the visitors, they really don’t want to see beyond the (thrills) offered by attractions like the bunker,” said Mahendran Sivakumar, a 61-year-old retired government education official who lived in the war zone throughout the entire conflict.