UNITED NATIONS, Jul 1 2013 (IPS) - Untold thousands dead and thousands more stranded or missing – these are the latest figures from various reports on the devastation caused by flash floods in the Indian state of Uttarakhand. 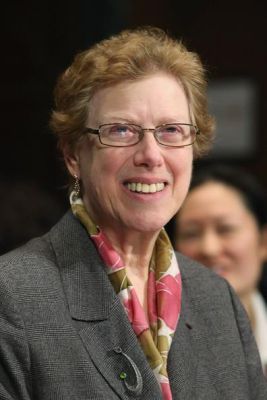 According to the United Nations, the 2004 Indian Ocean tsunami displaced 2.2 million people in 12 countries. In Bangladesh, 4.4 million people were displaced by Cyclone Sidr and floods in 2007, estimates the world body.

And an estimated additional 200 million people will be displaced due to climate change and natural disaster by 2050, according to Refugees International.

Experts say that the assessment of damage in natural disasters becomes all the more difficult simply because of the underlying uncertainty that accompanies such calamities.

The international community has long been mulling over the impact of climate change on migration.  It is high time that climate refugees or environmental migrants get some serious attention, said Susan F. Martin, director of the Institute for the Study of International Migration (ISIM) in Washington, tells IPS correspondent Sudeshna Chowdhury.

Q: How can climate change affect migration? Is it mostly internal displacement or is it large-scale country-to-country displacement?

A: The first point is that environmental factors are seldom the principal reason that people move. People generally migrate when environmental problems intersect with other factors, such as economic (loss of livelihoods), political (lack of governmental safety nets), and social (networks of people who have already migrated) ones.

There are four pathways through which climate change is likely to increase the propensity of human mobility in the context of these other factors:

Changes in weather patterns that contribute to longer-term drying trends that affect access to essential resources such as water and negatively impact the sustainability of a variety of environment-related livelihoods including agriculture, forestry, fishing, etc.

Rising sea levels and glacier melt that cause massive and repeated flooding that render coastal and low-lying areas uninhabitable in the longer-term.

Competition over natural resources that may exacerbate pressures, which contribute to conflict, which in turn precipitates movements of people.

The first two are slow-onset processes that are likely to lead to gradual increases in migration.

The latter two involve acute events and are likely to lead to more immediate, large-scale displacement.

We expect most of these movements to be within the borders of countries but in some cases, the migration and displacement is likely to be across international borders.

Much of the international migration is likely to be into neighbouring countries – for example, Bangladesh to India. A minority of the movements will likely be to more distant countries. There are cases, however, in which whole communities and even countries may need to be relocated, particularly in the small island states facing significant levels of rising sea levels and no interior to which people can move.

Q: Are the displaced mostly farmers and workforce from the rural sector whenever we talk about migration due to climate change?

A: It depends on the specific ways in which the impacts of climate change manifest themselves. In situations of prolonged drought, for example, the displaced are likely to be farmers and others dependent on rain-fed agriculture.

On the other hand, intense and frequent cyclones and hurricanes may displace thousands of people from urban areas along the coast. Generally, though, the extent of displacement in both rural and urban areas is tied to the way in which governments and communities prepare for and respond to these events.

With advanced planning, communities can increase their resilience to adapt to the effects of climate change in situ.

Q: Critics often argue that it is too soon to take climate change seriously. What will you tell them?

A: Ignoring the migration implications of climate change has considerable risks. If we wait too long, more people will move in emergency circumstances with little choice of destination and few opportunities to protect themselves from harm.

Policies should avoid situations where affected populations are forced to move (distress migration) or move in emergency situations. Special attention should be paid to providing alternatives to irregular migration through targeted temporary and circular work programmes. In cases, however, where the impacts of climate change preclude return to home countries, the focus should be on permanent admissions.

Q: Has there been enough documentation that can establish the link between climate change and migration?

A: There are still many gaps in our understanding of the interconnections between climate change and migration. Perhaps the most important involves numbers. As of today, there are no credible projections of the number or characteristics of persons who are likely to migrate principally as a result of environmental change.

The estimates do not distinguish between temporary displacement and permanent relocation within each of these forms of migration. Nor do they provide information about the gender, sex, age, or socio-economic characteristics of those who are likely to migrate in each of these categories. And, there is little information about the likely migration corridors – that is, projecting from where and to where people will migrate.

We need considerably more empirical research on communities already experiencing significant environmental impacts to help develop the evidence base needed to make more accurate projections, not only of overall levels of migration but, more importantly, of how migration is likely to manifest itself.

Q: Which are the regions to be worst affected by climate change?

The impacts will be felt more acutely in poor countries and, especially, in those weak governance or experiencing conflict and political instability.

If the experience with the 2010 earthquakes in Haiti and Chile is a harbinger of what is likely to happen, particularly in acute events, it is worth noting that a much stronger earthquake in Chile led to little loss of life, largely because of building codes and other preparatory actions, whereas a weaker earthquake in Haiti led to devastating loss of life and displaced millions.

The natural hazard (the earthquake) was not the principal culprit; poor governance and poverty made people in Haiti much more vulnerable.