RIO DE JANEIRO, Jun 22 2012 (IPS) - The continued exodus of Somalis to Kenya and Ethiopia has fuelled the debate on a new issue of global concern: climate refugees, driven from their homes and across borders by extreme weather events. 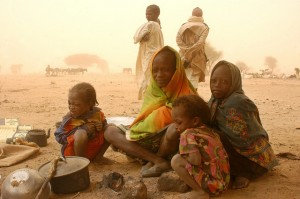 Massive displacement of people in some parts of Africa, especially the eastern part of the continent, is caused by lengthy periods of drought, famine and armed conflict. One illustration of this is the flood of people leaving Somalia since late 2010.

The issue has caused deep concern in the Office of the United Nations High Commissioner for Refugees (UNHCR), which launched the report “Climate Change, Vulnerability and Human Mobility” at the Rio+20 climate conference on Thursday Jun. 21.

Social organisations are highly disappointed by the outcome document of the U.N. Conference on Sustainable Development, or Rio+20, which has drawn heads of state from around 130 countries to Rio de Janeiro and ends Friday.

The UNHCR report, presented in the Riocentro, the conference venue, is based on the personal testimonies of 150 refugees and internally displaced people in Ethiopia and Uganda, and assesses global trends of forced displacement and their relation with climate change and natural disasters.

The growing number of climate refugees gives new urgency to the need for climate change mitigation and adaptation measures in areas far away from the parts of the world that are most affected by the phenomenon, such as Africa.

Protesters around the world took to the streets this week to mark World Refugee Day Jun. 20 and demand that the international community do more to address the growing humanitarian problem.

The report presented by U.N. High Commissioner for Refugees António Guterres was produced by the United Nations University Institute for Environment and Human Security in partnership with the UNHCR, the London School of Economics (LSE) and the University of Bonn.

The rector of the U.N. University, Konrad Osterwalder, said “The report highlights how important it is to understand the real experiences of vulnerable people with environmental stressors today.”

“This report confirms what we have been hearing for years from refugees,” said Guterres. “They did everything they could to stay at home, but when their last crops failed, their livestock died, they had no option but to move; movement which often led them into greater harm’s way.

“I am convinced that climate change will increasingly be a driver in worsening displacement crises in the world. It is very important for the world to come together to respond to this challenge,” he said.

UNHCR spokesman in Brazil Luiz Fernando Godinho told TerraViva that although there is still no clear definition of what constitutes a “climate refugee”, what is important to understand is that climate-related phenomena are driving more and more people from their homes and countries.

“The UNHCR has issued a call at Rio+20 for (the world) to pay more attention to the existence of refugees who have been displaced by extreme climate changes,” he said. “The international community has not come up with a set of measures or agreements to give guarantees to people who are driven from their homes by natural disasters.”

There are some 15 million refugees in the world today, 10 million of whom are under the UNHCR’s mandate. But it is impossible to determine how many of them were displaced by natural disasters and climate-related phenomena.

Somalia alone, which has the third largest displaced population in the world, has 1.1 million refugees living in neighbouring countries, three times the 2004 total. They were driven out of the country by a combination of armed conflict, drought and famine.

*This article was first published in TerraViva Rio+20.