COLOMBO, Jul 10 2013 (IPS) - It has been four years since the guns fell silent in Sri Lanka’s northern Vanni region, after almost three decades of ethnic violence. Unfortunately peace does not mean the end of hardship for the most vulnerable people here: the women. 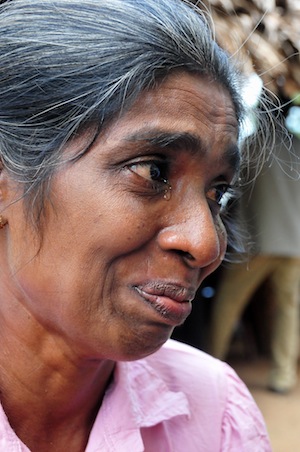 Kugamathi Kulasekeran, from the village of Allankulam in northern Sri Lanka, is taking care of three boys, while looking for one missing child. Her husband went missing during the war. Credit: Amantha Perera/IPS

In general, life has improved for the Northern Province’s 1.2 million inhabitants. Of these, 467,000 are newly returned war displaced, most of whom fled the last bouts of fighting between the government’s armed forces and the separatist Liberation Tigers of Tamil Eelam (LTTE) from 2008 to 2009.

Central Bank Governor Ajith Nivard Cabraal frequently mentions that the previously underdeveloped Northern and Eastern Provinces have been recording double-digit growth rates since the war’s end: in 2010 and 2011, the economy of the Northern Province grew at 21 percent and 27 percent respectively, outstripping national growth rates by leagues.

But on closer inspection, it is clear that not everyone is benefiting from this growth, least of all the 40,000 families that now have single mothers at the helm. Their husbands or partners left dead or missing during the conflict, these women have now become the sole breadwinners of their households.

“In spite of their number, female heads of households are marginalised both by the government and their own communities in the north,” said Raksha Vasudevan, author of a recent study on female-headed households published by the Geneva-based Graduate Institute of International Development Studies.

“They are clearly discriminated against in hiring for most jobs, even though they are willing to work in non-traditional roles and also face more difficulties than men in accessing credit,” Vasudevan told IPS.

IPS interviewed several women in the north who said they were willing to work in garment factories, in hotels, or even on construction sites but employers do not seem keen to let women into the workforce.

"It is high time the financial sector and other sectors of the economy tap into the…womanpower in the labour force." -- Muttukrishna Sarvananthan, head of the Point Pedro Institute of Development
Cabraal says the years following the war’s end have seen the investment of three to four billion dollars in the north, which formed part of the LTTE’s de facto separate state for the country’s minority Tamil population and thus was left out of national development assistance for over two decades.

The bulk of that money, Cabraal told IPS, has gone into the development of infrastructure like roads, highways, electricity, housing and water projects.

According to Muttukrishna Sarvananthan, head of the Point Pedro Institute of Development based in northern Jaffna, a close glance at the sectors that are booming in the north illustrates why women still complain about the lack of jobs.

The fastest growing sectors in the north in the last two years have been banking and real estate, each expanding by 114 percent; transport has been growing at a rate of 69 percent, construction at 56 percent, fisheries at 78 percent, and hotels and restaurants at 65 percent.

All of those sectors, with no exceptions, are dominated by men.

“It is high time the financial sector and other sectors of the economy tap into the…womanpower in the labour force,” Sarvananthan told IPS.

Many women here said they are eyeing cottage industries like poultry, home gardening and sewing, which they feel have a ready-made market – but they lack the necessary start-up capital to make these small ventures pay.

Even the few women who are able to find work remain trapped by a culture steeped in patriarchal attitudes and behaviours. It is particularly tough for widows, or women whose husbands are missing, to seek non-traditional forms of employment outside “acceptable” positions as schoolteachers, or government clerks.

“The women I interviewed reported feeling ashamed, and fear of being ‘gossiped’ about when they moved around on their own,” said Vasudevan. “Any hint of interacting with non-related males could lead to being ostracised by their communities.”

Women in charge of their families’ welfare, who are forced to interact with male employers or buyers of their produce, thus find themselves hit by the double whammy of poverty and social exclusion.

Savithri, a widow with two young kids aged three and six, has begun to plant vegetables in her small garden in the northern town of Kilinochchi, but says that selling her produce is proving difficult.

“The buyers are all men, they try to bully me and get a cheaper price,” she told IPS.

Savithri said most buyers were keenly aware of her economic distress and would wait until the last possible moment, “just before my harvest was worthless”, to confirm purchases and therefore secure the lowest possible price.

No matter how trying her work gets she knows she must keep it at if she wants to keep sending her children to school.

During the war, the LTTE developed a strong female cadre contingent, including fighting formations. Women were expected to take up arms for the cause, shattering the old stereotypes of women as fragile creatures, in need of protection and best suited to sitting at home.

But that status accorded to female LTTE cadre did not extend to civilian women, who remained fixed in their role as mother-wife-housekeeper.

Loyalty to one’s husband was of the utmost importance in upholding social relations, a mindset that has travelled down through the war years into peacetime.

Now, “even though remarriage could be an emotionally and financially sensible option for many women, the heavy stigma attached to the idea in Tamil society prevents them from even considering it,” Vasudevan said.

Saroja Sivachandaran, who heads the Jaffna-based Centre for Women and Development, told IPS that post-war assistance programmes targeting single women have not taken off in the north.

“With donor funding now drying out, these women find themselves in even more precarious situations,” she said, referring to the fact that the U.N.-Government of Sri Lanka Joint Plan of Assistance for 2012 was underfunded by 77 percent, having received only 33 million of a desired 147 million dollars.

The lack of proper housing coupled with economic insecurity has created a highly precarious situation for women.

“With many still lacking homes with locking doors, they feel very exposed to attack at any moment,” Vasudevan said.

However, officials in the region told IPS that there were no reports of such incidents, adding that the government is doing all it can to ease the burden on female-headed households.

Rupavathi Keetheswaran, the top public official in the northern Kilinochchi District, told IPS that single women with families have been targeted for livelihood programmes, including credit for home gardening, self-employment and the distribution of cattle.