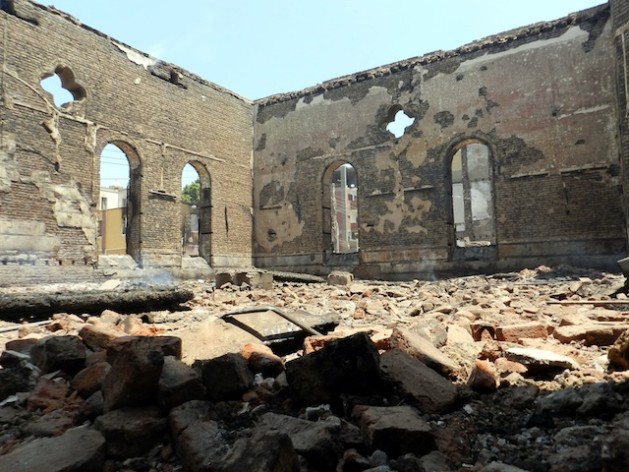 The ruins of the Evangelical Church in Minya that was burnt down by supporters of ousted Egyptian President Mohammed Morsi. Credit: Rimon Zaky/IPS.

The Coptic Christians rights group Maspero Youth Union estimates that as many as 38 churches have been “completely” devastated by fires across nine governorates since Aug. 14. Many others have been looted or stormed.

The attacks have been led by angry demonstrators loyal to the Muslim Brotherhood, Ishaq Ibrahim, religious rights researcher at the Egyptian Initiative for Personal Rights, told IPS. “They seek to drive a wedge between Christians and Muslims to show the world that Egypt is on the edge of collapse.”

"The burning of the churches has extended to several churches of particular historical and heritage value." -- Egyptian archaeologist Dr. Monica Hanna

Christian homes and Christian-owned businesses have been attacked, Ibrahim said, and many Christians driven out of their homes and cities.

“Fifty-eight houses and 85 stores have been burnt and looted all over Egypt since black Wednesday,” he said. At least 525 Brotherhood supporters were killed and more than 2,000 reported injured in the brutal crackdown on Morsi supporters on Wednesday last week.

“The Brotherhood assumes that Christians instigated the toppling of Morsi because they have been against Shari’a,” Ibrahim said.

Six Coptic Christians, the dominant Christian sect in Egypt, have been killed, and seven have been kidnapped during the torching of churches, he said. “The Upper Egypt governorate of Minya was the scene of the worst anti-Coptic attacks; 12 churches were totally devastated.”

Muslim Brotherhood spokesperson Dr. Ahmad Aref condemned violence against Christians and the destruction of the churches, and accused military leaders of plotting these incidents to tarnish the image of the Muslim Brotherhood.

The Egyptian Coptic Church issued a statement affirming that it stands by the police and the armed forces in the face of what it called “armed violence groups” and “terrorism”.

“We have not seen such cruelty before,” Anba Makarios, bishop of the Orthodox Church in Minya, told IPS. He said Coptic Christians have been suffering for decades, and struggling to get building permits for churches.

“In less than three days the toll of burnt and looted churches exceeded 55.

“They were shouting ‘Allahu Akbar’ (God is the greatest) while burning our churches, orphanages and hospitals. They were fighting as if it was a holy war against the cross. How will people trust any religion after seeing how blood was shed in the name of god?”

Makarios said the attackers seemed to belong to radical Islamic movements. “They believed that the church supported the overthrow of Morsi financially and spiritually, so they came to take revenge.”

But the bishop opposed some Christian pleas for foreign intervention to protect them. “Churches and Copts’ properties should be protected by the state,” Makarios said. “Christians have refused such interference despite our long suffering from religious discrimination.”

The attacks are being seen by many as a political game. The Brotherhood has been trying to attract the attention of the Western community in all sorts of ways, Fouad Badrawi, deputy chairman of the Hizbu Al-Wafd liberal party, told IPS. “The Brotherhood expected that committing religious repression against Copts would encourage the U.S. and the European Union to intervene.”

The terrorists planned these attacks at Upper Egypt, where security reinforcements could not easily be sent, Badrawi said. This strategy had weakened the efforts of the police and army, he said.

In turn Islamic groups had found the reaction of the Pope and of Christian leaders shocking, Badrawi said. Badrawi is the grandson of the late leader of the party, Fouad Serag Al-Din. Hizbu Al Wafd is a nationalist liberal political party founded in 1920. It was the most popular party in Egypt till it was dissolved after the 1952 revolution. It was revived in 1983.

Archeologists have condemned the attack on church buildings; some of them were many centuries old. “The burning of the churches has extended to several churches of particular historical and heritage value,” Egyptian archaeologist Dr. Monica Hanna told IPS.

An ancient monastery of Virgin Mary from the 4th century CE has been ruined, she said. “Thugs took advantage of the lack of security and have been digging illicitly for antiquities in the monastery of Deir Mawas in Minya governorate that was attacked and burnt by pro-Morsi supporters.”