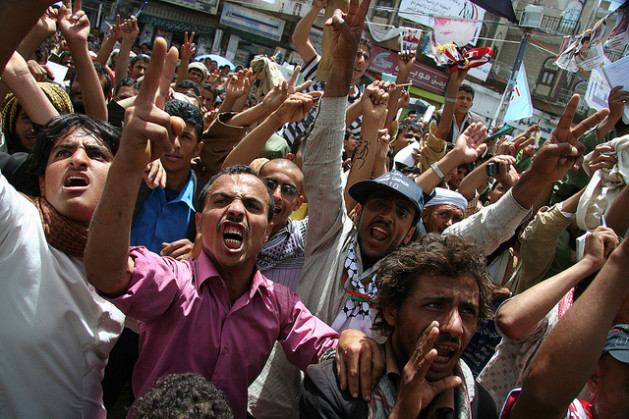 Iran, Syria, Sudan, Belarus and Zimbabwe - all widely condemned for human right abuses - are members of Interpol. Yemen is also a member and known for its human rights abuses. Pictured here are protestors in Yemen. Credit: Yazeed Kamaldien/IPS

The number of Interpol’s “wanted person” alerts have more than tripled over recent years, and those “wanted” are not just suspected criminals.

Interpol issues thousands of “wanted person” alerts, so-called red notices, every year. Criminal justice experts say that even though some of Interpol’s member states are nations with poor human rights records and corrupt legal systems, the organisation has no effective mechanisms to prevent countries, or even individual prosecutors, abusing its system.

Iran, Syria, Sudan, Belarus and Zimbabwe – all widely condemned for human right abuses – are members of Interpol, and each country has red notices listed on its website. A red notice is not an arrest warrant. National governments decide how to act on a red notice, and many consider it a sufficient legal basis for arrest.

“Interpol’s ‘wanted person’ alerts can have a catalogue of devastating effects,” Alex Mik at Fair Trials International told IPS. “People have had visas refused, separating them from family for months or years and causing them to lose their jobs and livelihoods. Businessmen can lose clients, and journalists their credibility. People hesitate to travel for fear of arrest.”

Fair Trials International assists individuals facing trial in a country other than their own. The organisation has worked on several cases, and raised questions over Interpol’s red notices.

“For example, the Russian activist and journalist Petr Silaev was arrested in a youth hostel, handcuffed for five hours in a police car and imprisoned for over a week at the request of an investigator in Moscow after a red notice,” Mik said. “Indonesia used Interpol’s systems to publicly brand Benny Wenda, a key figure in the West Papuan independence movement, a wanted terrorist and discredited his political campaign.”

People in this situation have no independent court they can turn to for redress; they can only request a review by a commission funded by Interpol. Those on the Interpol commission are government officials and not experts in human rights. 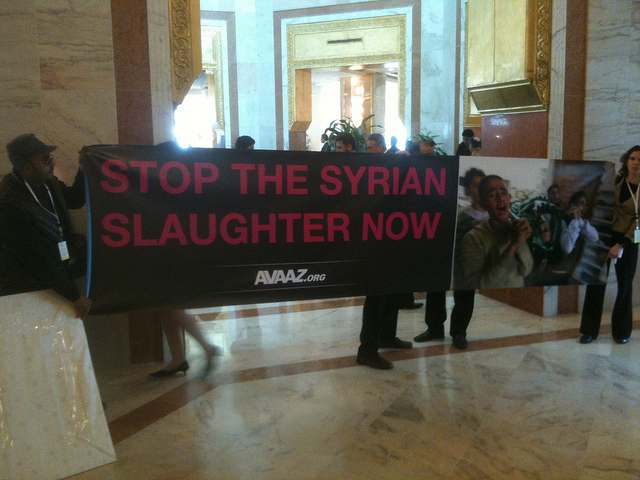 Protestors inside the Friends of Syria meeting, demanding an end to the bloody violence in their country. Iran, Syria, Sudan, Belarus and Zimbabwe – all widely condemned for human right abuses – are members of Interpol. Credit: Jake Lippincott/IPS

Fair Trials International has called for Interpol to protect itself against political abuse to ensure that genuine fugitives are targeted, and not those whose only “crime” is political opposition.

In 2011, the International Consortium of Investigative Journalists, a non-profit investigative journalism project, analysed a snapshot of all public red notices on Interpol’s website, as on Dec. 10, 2010. More than 2,200 of the 7,622 red notices were from countries that provide no political rights or civil liberties, according to the organisation Freedom House. Nearly half the red notices studied, 3,600, were from countries Transparency International ranks among the most corrupt.

Interpol reports that it issued 2,343 red notices in 2005, 6,344 in 2010, and 7,678 in 2011. Until 2008 police agencies had to apply directly to Interpol for a red notice. Today, to save time and money, every red notice request is entered into the system directly by the police agencies themselves. Police around the world see those notices before Interpol reviews them.

In February 2013 the organisation Reporters Without Borders called for withdrawal of Interpol’s red notice against the French journalist Daniel Lainé. The red notice prevented Lainé from working as a reporter outside France. The organisation said the case had “all the signs of a frame-up, with charges based on written evidence from someone who had never appeared in court.”

On Jul. 1, 2012, a new resolution governing Interpol’s red notice system came into effect aiming to ensure that publication and circulation of red notices conform to high standards. But according to Fair Trials International, the reform does not go far enough.

Interpol is an organisation with 190 member states and an annual budget of almost 60 million euros. According to its constitution Interpol is required to comply with “the spirit of the Universal Declaration of Human Rights.”

In the journal the International Enforcement Law Reporter, Interpol wrote in 2012 that its “comprehensive legal framework ensures that the processing of information via Interpol’s channels (including notices) conforms to Interpol’s rules.”

IPS requests to Interpol for a comment brought no response.