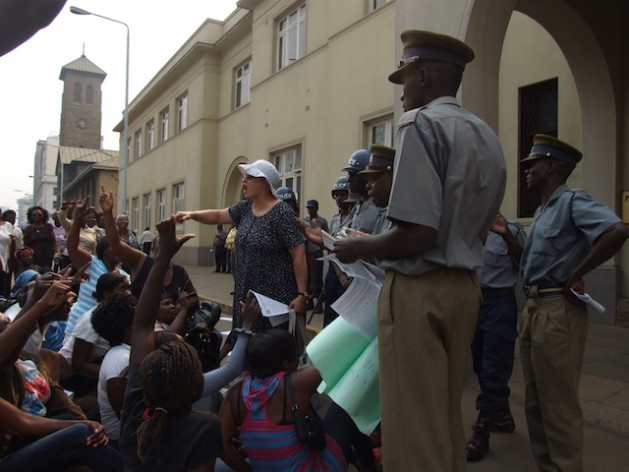 Jenni Williams (in white cap) addresses Women of Zimbabwe Arise members at Zimbabwe’s parliament building in Harare with the police looking on. The clampdown on civil society spreads far beyond Zimbabwe according to a recent CIVICUS report. Credit: Misheck Rusere/IPS

JOHANNESBURG, Apr 29 2013 (IPS) - As Zimbabwe is expected to head to the polls in a little less than two months, clampdowns on civil society in that southern African nation have increased, according to Godwin Phiri, western region chairperson of the National Association of Non-Governmental Organisations in Zimbabwe.

Phiri tells IPS that it was very difficult to disseminate information to rural communities about their rights as voters as they were not allowed to hold public gatherings.

“The battle is in the rural communities where, according to the Public Order and Security Act, we need to inform the police four days before if we want to have a meeting. But the police say that you need to seek their permission, and what we have seen over time is that they decide what meetings can be held,” Phiri says.

He adds that as the elections draw nearer, the police have begun prohibiting meetings by civil society organisations in rural areas.

“Ahead of the elections the main thing we are trying to activate is our local structures to use as points of disseminating voter information. But a lot of communities are living in a context where there is a lot of violence and their movements are curtailed by the fear that anything can happen and can be interpreted as anti-government. So they are afraid to talk about issues,” he says.

And Women of Zimbabwe Arise (WOZA), an all-female social justice pressure group, has been no exception in the crackdown on civil society organisations, including arrests, over the past year, strongly believed to be a measure by the coalition government to thwart dissent.

Jenni Williams, founder and national coordinator of the group, tells IPS that she and her co-founder Magodonga Mahlangu have been arrested more than 50 times during the past 10 years that their organisation has been in existence. In April, WOZA laid a complaint with the African Commission on Human and Peoples’ Rights (ACHPR) at the African Union body’s 53rd session.

However, media and democracy campaigner Pedzisai Ruhanya, who is the director of the Zimbabwe Democracy Institute, says nothing will come of it as President Robert Mugabe’s defiant government has ignored other rulings from the ACHPR.

“They have done that before and they will do it again. Actually there is a precedent; they have done it and what has happened to them? They are still there. What happened to them when they…defied other rulings that came from the Banjul court in the Gambia where the ACHPR is based.

“They will continue to do business as usual because that court (the ACHPR) has no teeth, it is a toothless bulldog and cannot enforce its decisions, hence it’s an appendage of the state parties, including Zimbabwe,” Ruhanya says.

But the experiences of civil society in Zimbabwe are not unique to that country. A new report released by CIVICUS, the global civil society alliance, states that despite the expectation that the Arab Spring, Spain’s “indignados “and the global Occupy movements could bring radical change, this has not happened.

The report titled “The State of Civil Society 2013”, released on Apr. 29, says the great people’s movements of 2012 were followed by “a range of negative events that make the work of civil society even harder.”

“The ever-growing diffusion of social media and mobile technology, and the mushrooming of digital platforms for self-expression, might suggest that never before has civil society had so many venues to voice its claims and visions,” Mario Lubetkin, director of Inter Press Service (IPS), says in a chapter of the report co-written with Citizen Lab fellow Stefania Milan.

Milan and Lubetkin state, however, that this is not truly the case and note that “the news agenda is today largely dominated by stories from the global North.

“The mediascape is still characterised by growing media concentration, the predominance of ‘infotainment’ and ‘sensationalism’ over information and analysis, and the prevalence of Western voices at the expense of a silenced global South.”

They recommend that “familiarisation with the journalism world, its needs and practices, is essential for CSOs (Civil Society Organisations), and even more so for those people whose task is to reach out to journalists.”

In his introduction to the report, Dhananjayan Sriskandarajah, secretary general and chief executive of CIVICUS, concurs with Milan and Lubetkin.

“New technologies are making it easier to access information, connect with other like-minded people, and mobilise large numbers of people. But restrictions on websites and social media are increasingly being used as tools to keep citizens in the dark and prevent them from scrutinising corruption.”

The report notes that a number of governments have recently introduced or plan to introduce laws that regulate the formation and operation of CSOs. “Laws in Kenya, Tanzania, and Uganda, for example, give the state the power to declare a CSO unlawful or withdraw its registration.”

However, the report states that CSOs are finding innovating ways of tackling social problems. For example, in Kyrgyzstan, “Public Watch Councils have increased accountability and transparency of central governmental agencies. One of the ways in which they have done so is through several TV discussions and public hearings involving the participation of state officials, CSOs and private sector representatives.”