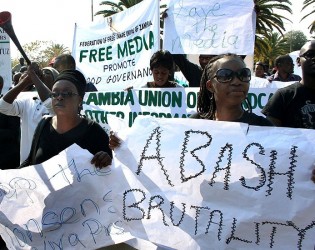 By Danny Sriskandarajah
I had the privilege of visiting South Sudan a few months after the world’s youngest state had been born in July 2011.  Then, most people were wondering what the future held for the country.  The road has not been easy so far.

By David Kode
Last July marked 19 years of Gambian President Yahya Jammeh’s inordinately long rule. His legacy during this time is to mark his country as one of the most unapologetically repressive states in Africa.

By Stephen Leahy
"Very disappointing." That was the term business and non-governmental organisations used to describe the formal intergovernmental negotiations at the Rio+20 Earth Summit as of Tuesday.
ADVERTISEMENT ADVERTISEMENT