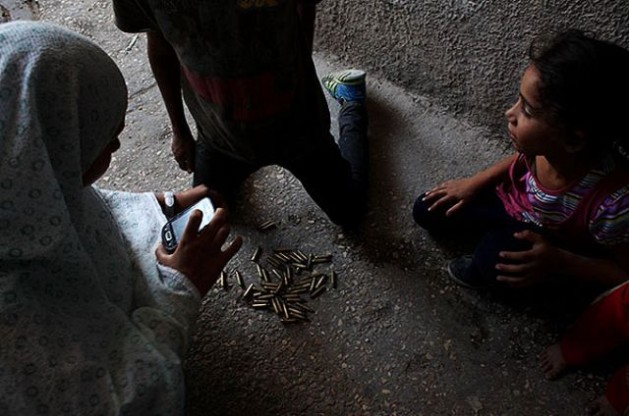 QATAR, Aug 26 2013 - Israeli forces have killed three Palestinians, including a UN worker, in an early morning raid on the Qalandiya refugee camp in the occupied West Bank.

Medical sources told Al Jazeera that at least 15 others were wounded, six of them seriously, during clashes between the Israeli forces and Palestinians that erupted after the raid on Monday.

The United Nations Relief and Works Agency later said one of those killed, a 34-year-old father of four, worked for them and was walking to work when he was shot in the chest. The agency condemned the killing.

An Israeli police spokeswoman told the AFP news agency that the officers were on a raid to catch a “terror suspect” when more than 1,500 Palestinians took to the streets and attacked them with firebombs and rocks.

It was not clear if the Israelis made any arrests.

A 13-year-old boy from the camp, whom Al Jazeera has not named because of his age, said he was on his way to school when he saw Israeli soldiers shooting live ammunition, rubber-coated steel bullets and tear gas.

“I counted about 10 army vehicles in total and many soldiers marching alongside them shooting randomly”, he said, adding that at least two of the vehicles had caught fire from petrol bombs hurled by the youth.

“I’m not usually scared when the army invades, but that moment it was hard not to be because of all the shooting.”

Mohamed, a 19-year-old with a fresh bandage wrapped around his head, said he had just left home for work when he was shot with a rubber-coated steel bullet. “Everyone was lying on the ground when I got hit,” he said.

Hours after the killings, hundreds of mourners gathered at the Qalandiya Mosque for the three men’s funeral.

When midday prayers ended, a group of masked Palestinian fighters carrying M16 assault rifles fired bursts of ammunition into the air before the three bodies wrapped in white cloth and Palestinian flags were carried out of the mosque.

The crowd followed behind chanting, “With our blood, with our souls, we will redeem you, oh martyrs.”

Palestinian negotiators cancelled a planned round of peace talks with the Israelis in protest.

Rami Hamdallah, the Palestinian prime minister, said in a statement: “Such a crime proves the need for an urgent and effective international protection for our people.”

Israel and the Palestinian Authority recently resumed US-brokered peace talks after a long halt last month. However, both sides have not expressed much optimism about a major breakthrough.

Violence in the West Bank has escalated since the beginning of 2013. Israeli forces have killed 14 Palestinians in the occupied territory this year, most of them in clashes, compared with three killed in the same period in 2012.

With additional reporting by Matthew Cassel. Published under agreement with Al Jazeera.