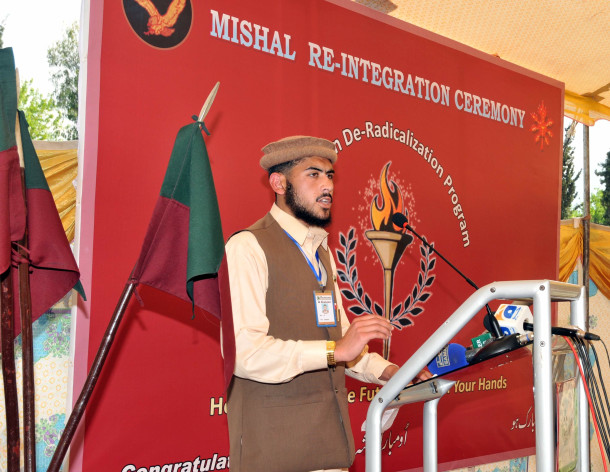 A local leader addresses a meeting in Peshawar against radicalisation. But thousands of innocent people have reportedly been picked up by security forces and are missing. Credit: Ashfaq Yusufzai/IPS.

PESHAWAR, Pakistan , Aug 30 2013 (IPS) - Twenty-year-old Adnan Khan was among eight persons convicted for an attempt on the life of former president Gen. Pervez Musharraf. The conviction appeared uncertain, just as his whereabouts were before the order by a military court.

“My brother was not a terrorist. He was picked up [in 2004] by security agencies because they said he had links with al-Qaeda and the Taliban,” his brother Abdul Qadoos from Khyber Agency, one of the seven tribal districts called the Federally Administered Tribal Areas (FATA), told IPS.

It took years to determine where Khan had been taken. The attempt to assassinate Musharraf came in December 2003.

“In February 2005, we filed a habeas corpus petition in Peshawar High Court (PHC) but security agencies denied his presence in their custody, and the case was disposed of,” Qadoos said.

“In June the same year, another petition was filed after which it came to the family’s knowledge that Adnan has been undergoing trial along with others by a field general court martial.”

“There’s no justice in such cases because my client was not given fair trial by the army court,” Habibur Rehman Afridi, Khan’s lawyer, told IPS. Khan was convicted by the military court two years ago.

But Khan’s family is luckier than those of an estimated 8,000 taken away by security forces and not seen since.

Advocate Arif Jan who is pursuing 60 cases of forced disappearances says the issue surfaced in Pakistan soon after attacks in New York and Washington in September 2001. Pakistan’s Inter-Services Intelligence and the Military Intelligence picked up large numbers of people from Khyber Pakhtunkhwa province of Pakistan in the north, FATA, Balochistan and Sindh.

“In the majority of the cases the intelligence agencies initially denied the presence of missing persons with them and later they were found in their custody,” Jan said.

Amina Masood Janjua’s husband Masood Janjua, 44, went missing on Jul. 30, 2005. She subsequently set up the Defence of Human Rights Pakistan (DHRP), which is spearheading a campaign against forced disappearances and seeking recovery of missing persons.

“We have submitted cases in court for recovery of 4,000 persons, including 1,700 from Balochistan, Khyber Pakhtunkhwa and FATA. Of these people, about 2,000 have been handed over to the Americans,” Janjua, mother of three, told IPS.

“My husband was a soft-hearted man. He ran an information technology college and had nothing to do with al-Qaeda or the Taliban.”

Many of the missing people, she believes, are in the U.S.-run detention centres in Bagram or Herat in western Afghanistan.

“The woes and mental torture of sisters, mothers, daughters, fathers, sons and brothers continue. We hope the new Prime Minister Nawaz Sharif will take bold and practical steps to close the underground torture cells established by the security agencies, and that all the missing persons will be recovered,” said Janjua.

The Human Rights Commission of Pakistan says the vast majority of illegally detained persons are linked to nationalist parties in Sindh and Balochistan provinces that were staunchly opposed to the military government of Musharraf.

In one case that came to light, Dr Afia Siddiqui, a woman suspected by the U.S. of links to al-Qaeda, and who had been missing since 2003 was later found in the custody of U.S. forces.

The Supreme Court of Pakistan, the Lahore High Court and the PHC have so far managed to get about 2,000 detainees released from the country’s security apparatus.

There is no certainty whether the missing may be dead or alive. Advocate Major (retired) Farhatullah Khan, said that his client’s husband Shaukat Ali and her brother-in-law Sardar Ali were taken away by the law enforcement agencies in August 2010 from Mardan district in Khyber Pakhtunkhwa. A few weeks later the body of Sardar Ali was found in Kohat district in the province. Shaukat Ali is still missing, he said.

In September 2007 Amnesty International said that Pakistani intelligence officials were abducting people with little or no proof of al-Qaeda connections, and selling them to the U.S.

On Jan. 8 this year the Parliamentary Committee on National Security said a person’s arrest by any agency or department must be in accordance with Article 10 of the Constitution, and that activities of intelligence agencies must be regulated. Arrested people must be presented before the court within 24 hours, it said.

Amina Janjua said this has brought no change in the ways of the intelligence agencies.

In September last year, a four-member United Nations working group on enforced or involuntary disappearances welcomed “the declared will of the Pakistan government to tackle the issue of enforced disappearances,” but noted that “serious challenges remain.”

The UN experts welcomed the role played by the judiciary. But they noted that information was lacking. “We note that cases continue to be reported to national authorities, but there are controversies both on figures and on the nature of the practice of enforced disappearances,” said Olivier de Frouville, chair of the working group.

The government informed the PHC earlier this year that more than 400 suspects arrested during the counter-insurgency offensive in Swat in 2009 had been sent to seven internment centres, where relatives were allowed to meet them.

Justice (retired) Javid Iqbal, chairman of the government-appointed commission on missing persons says the total number of missing persons in Pakistan stands at 460, including 18 from Islamabad, 117 from Punjab, 174 from Sindh, 170 from Khyber Pakhtunkhwa, 57 from Balochistan and 12 each from Azad Kashmir and FATA.

But that is the official figure. Amina Janjua doesn’t agree. “They are in thousands.”