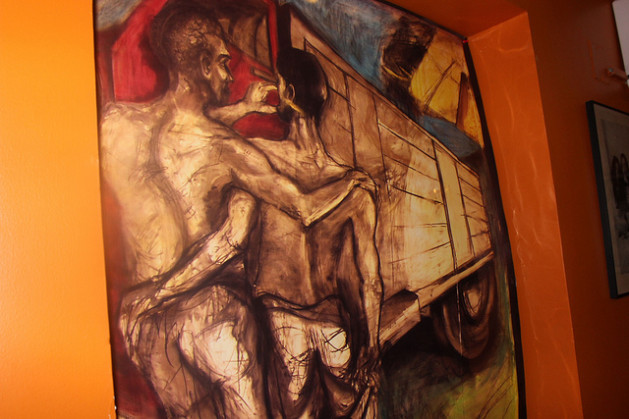 KARACHI, Pakistan , Sep 27 2013 (IPS) - It took fifty-something Sameer*, father of two, 25 years of marriage and deceit to eventually break free and come out of the closet three years back.

Living with Ahmed*, a budding actor half his age, he says it had come to a point when living a life of “lies and more lies” had become suffocating. Now, the Karachi businessman tells IPS, “It’s like a load off my back; I can finally be myself.”

It is difficult to pin down exact numbers, but Pakistan has a sizeable lesbian, gay, bisexual and transgender (LGBT) community. One very well-guarded LGBT website boasts 25,000 profiles from all over Pakistan, with 8,500 from Karachi alone.

“These obviously include only the tech-savvy,” says Akbar*, a 36-year-old medical practitioner who is in a relationship with 31-year-old advertising professional Ali*.

“There must be a huge number who are either not computer literate or want to stay closeted,” he tells IPS.

Pakistan’s conservative Muslim society considers homosexuality a sin. Article 377 of the Pakistan Penal Code prescribes up to 10 years in jail and a fine for those caught engaging in what are referred to as acts “against the order of nature”. There have been no prosecutions so far, though.

The larger community is mainly tolerant of gay men as long as they and their lifestyle operate under the veneer of social conformity. “Many ministers indulge in homosexual acts,” says Ahmed. “I have myself been the recipient of their attentions!”

This is perhaps why the gay men IPS spoke to did not recount any incident of witnessing or experiencing homophobia. “As long as you stay in the closet, do not ask for your rights, you are safe,” says Akbar.

However, sometimes the pressure to be discreet gets too much and gay men feel increasingly constricted in terms of places to hang out at. As Sameer says, “We can’t even be seen together at a café; there are no public spaces where we can be ourselves.”

While there are some well-known gay hotspots in Karachi, like around the much-revered tomb of Abdullah Shah Ghazi and the gardens around Frere Hall, Akbar says the haunts keep changing.

The more affluent gay men travel abroad or organise private parties. Email and text messages have made life much easier. “It is now possible to get together at the click of a button,” says Akbar.

The homosexual relationship, though, is a complex one, and not necessarily high on fidelity. While Sameer and Ahmed profess to be in love with each other, neither sees it as a monogamous relationship. “Everyone in our community has sex with others,” says Sameer.

Akbar too confesses to the odd one-night stand despite being “in love with Ali.”

“At least we are not cheating on our partners as some straight men do,” says Akbar. “Almost every straight married man I know is having an extramarital affair. They have no qualms about being unfaithful given the opportunity and guarantee of not being found out.”

When IPS repeats this to a straight married banker who does not wish to be named, he says, “I am surprised these people, who complain of being suppressed by society, seem to be as judgmental about us as we are about them.”

Senior finance professional Ali Aamir, on the other hand, concedes there could be some truth in what they are saying. “Society and religion have given marriage a sacred hue, but behind the marital façade, all this could be happening,” he tells IPS.

Ahmed says he knows a number of people who maintain the façade of a married life and have a gay lover on the side. He himself is open to the idea of a heterosexual marriage.

“A vast majority of marriages are arranged, not built on love; I’d be up front about my status before marriage!” he says, disclosing that many of his women friends do not mind the idea of being married to a gay man.

“I know many gay men who treat their wives well, even perform well in bed,” Ahmed adds. “In fact, we are more attuned to women’s needs, and can therefore make better husbands.”

However, while Ahmed is open to having the best of both worlds, marriage was a prison for his partner Sameer.

It is easier having a homosexual relationship when you are young, says Sameer. “Going to an all-boys’ school, having male friends over or even spending the night never raises alarm bells,” he adds. “It’s only when you reach marriageable age that the pressure begins to build.”

“Even where families have a fair idea, they hitch you up thinking marriage will cure you of this passing phase,” says Akbar. It’s taken for granted a man will have a family, regardless of sexual orientation.

Akbar also feels frustrated that he has been with Ali for the last eight years, yet cannot tell people what his relationship with him is, even though both their families have accepted their sexual bent. “I’m sick of having to say he’s my cousin or my friend. I want to tell the world that we are a couple,” he says.

The implications get serious when it comes to getting insurance or medical coverage, as Akbar discovered when he went to buy a life insurance policy and was told he could not nominate Ali as a beneficiary. “It had to be a blood relative or a spouse.”

Nor can Ali avail himself of the benefits Akbar and his family are entitled to. “It can only be a wife, children or parents,” Akbar adds.

“Today gays in the West are asking for equal rights for same-sex couples; in Pakistan they have a long way to go before they can ask for that,” Jumana*, a development sector consultant, tells IPS.

“The fact that they are at least willing to talk publicly about the issues they face here is the first brave step,” she adds.

*Names have been changed to protect identities.