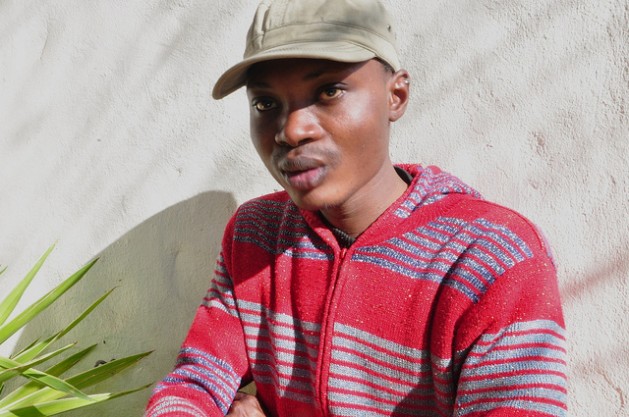 Junior Mayema says that discrimination against gay people is just as bad in South Africa as in his home Democratic Republic of Congo. Credit: Davison Mudzingwa/IPS

CAPE TOWN, South Africa, Jun 26 2012 (IPS) - When Junior Mayema boarded a plane to South Africa from his native Democratic Republic of Congo in 2010, he cried tears of joy because he was finally heading to a country where he could live openly as a gay man.

South Africa is the only African country to recognise same-sex unions, and the country’s constitution forbids discrimination on the basis of sex, gender or sexual orientation.

However, when he arrived in South Africa Mayema shed even more tears. But this time they were tears of pain because of the exclusion and harassment he had to endure.

In South Africa Mayema has been verbally abused and beaten up several times for being gay. And he has lost confidence in the justice system because of apathetic law enforcers.

“I was beaten up last year and when I went to report it to the police they started laughing asking ‘Why are you gay? Just go to the hospital.’”

The prejudicial attacks are one of the reasons why Mayema left DRC. Being gay in his home country means finding work is almost impossible, and it means being discriminated against in education institutions and even being killed.

Mayema, a university drop out, had a close brush with death when his own family beat him up because of his sexual orientation. He said that he was starved for seven days, as his family attempted “to exorcise his demon.”

But he never expected to experience similar discrimination in South Africa. He told IPS that he was ejected from several shelters for being a gay man and a foreigner. The situation is sometimes so bad that he said he misses home.

“In South Africa it’s worse, there is xenophobia, homophobia and racism,” Mayema told IPS, lamenting his fading hope for a new life here.

But his story is sadly not unique. His is just one of many cases of hardships that refugee Lesbian, Gay, Bisexual, Transgender and Intersex (LGBTI) people experience here according to a report titled “Dream Deferred: Is the Equality Clause in the South African Constitution Bill of Rights just a far-off hope for LGBTI Asylum Seekers and Refugees”.

The report, produced by the People Against Suffering, Oppression and Poverty (PASSOP), was released on Tuesday Jun. 26. It found that at the root of the plight of refugee LGBTI people in South Africa was their lack of legal residential status. The report recommends that the government of South Africa sensitise its Department of Home Affairs staff to properly handle the application for refugee status by LGBTI people.

According to the United Nations Refugee Agency guide for adjudicating LGBTI refugee and asylum claims, threatened people should be granted legal status in their country of refugee. But this is not the case in South Africa.

“Out of 35 people we interviewed who applied, only two were granted refugee status,” said Guillain Koko, coordinator of the PASSOP LGBTI advocacy project.

Koko said that the lack of residence status jeopardises the chances of employment for refugee LGBTI people.

“They are the most vulnerable people,” he said. He added that the difficulties of being unemployed resulted in “two of those interviewed trying to commit suicide, while some were driven into sex work.”

“They can’t go to gay clubs or restaurants because it’s expensive.”

Robinah Kintu, a former Uganda national soccer player who resides in Mandalay Township near Cape Town, is a case in point. She has a tenuous future in the country and she may soon be unemployed because she has not been granted residence here.

Kintu currently plays provincial league soccer for the Red Eagles Football Club in Cape Town. However, the South African Football Association has refused to grant her permission to continue playing since she only has asylum in the country. “When you are a foreigner and also a lesbian, for me, I call it war,” she told IPS.

She has been living in the country since 2009 and said that there is little to distinguish between South Africa and her East African home, a country notorious for its homophobia, when it comes to people’s attitudes towards LGBTIs.

“The people there treat you, if you are lesbian or gay, like a pig,” she said. “The sentence is death, when they find out that you are a lesbian.

“In South Africa, it’s still the same. There is a law but people do not follow the law…even South African lesbians are raped and killed.”

Kintu has been subjected to her fair share of harassment, and fears for her safety.

“If I had money I would move from this place, it’s not safe. That’s why you can’t find me walking out at night…they can kill or rape you,” she said, her voice breaking.

The PASSOP report calls for tighter law enforcement regarding the rights of LGBTI refugees in South Africa. It urges the government “to take affirmative measures to prevent, stop and prosecute acts of violence against LGBTI refugees.”