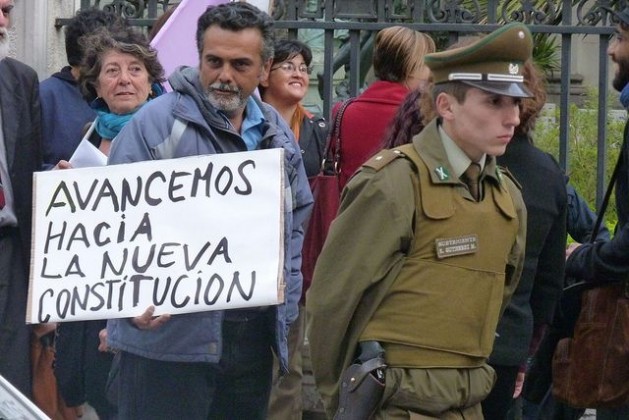 SANTIAGO, Sep 11 2013 (IPS) - Sept. 11, 1973 marked the start in Chile of a dictatorship that was synonymous with cruelty. But above and beyond the human rights violations, the reforms ushered in by the regime of General Augusto Pinochet continue to mark today’s Chile – a country of dynamic economic growth but a fragmented society.

Two of these reforms, in the spheres of politics and education, are among the targets of the massive student movement and sectors of the left, which are seeking to dismantle them and consider them key campaign issues for the November general elections.

“These are two essential areas, because they have an impact on the democratic character of Chilean society,” Pedro Milos, a history professor at the private Alberto Hurtado University, told IPS.

“The Chilean path to socialism” that the government of democratically elected Salvador Allende (1970-1973) attempted to follow before he was overthrown by Pinochet’s bloody coup, was systematically squelched by the dictator through a constitution that is still in effect today.

Ruling with an iron fist, Pinochet (1973-1990) introduced free-market policies, privatised and decentralised essential services that had been provided free of cost by the state, such as healthcare and education, and was a pioneer in putting pension funds in the hands of private companies.

At the time the educational reforms began to be adopted in 1981, 78 percent of primary and secondary school students were in the public education system, while the rest went to private schools.

But public education was whittled down, with schools transferred to the jurisdiction of municipal governments and the creation of state-subsidised private schools, with the subventions depending on the number of students they managed to attract.

The proportion of students in municipal schools had fallen to 57.8 percent by the return to democracy in 1990, and to 37.5 percent in 2012, due to the marked decline in the quality of education in these schools. That trend can be seen in the following table: 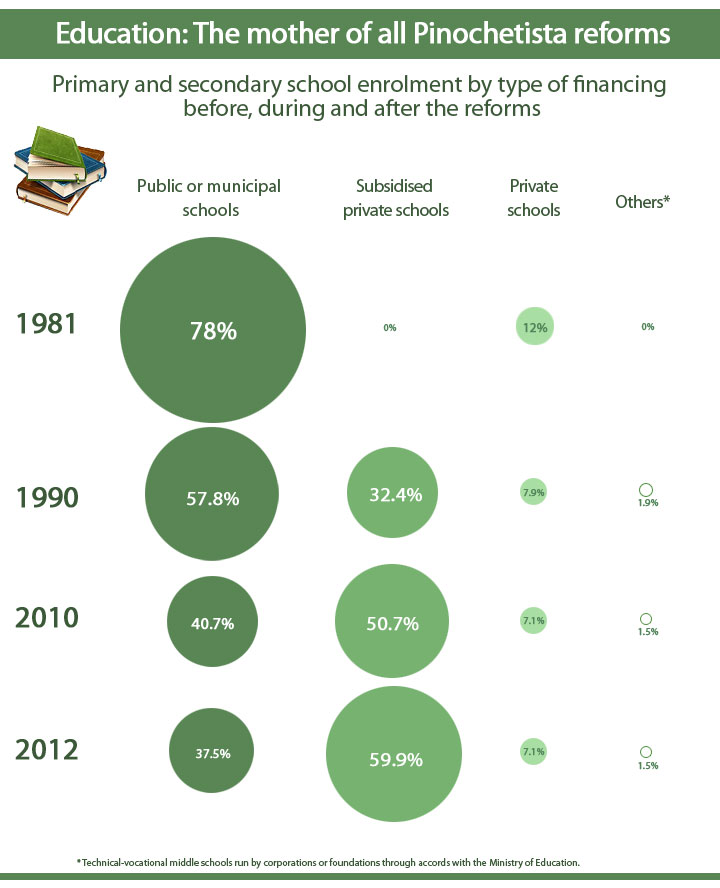 “The worst thing was the municipalisation of primary and middle schools,” Pilar Mella, a 57-year-old secretary, told IPS. “The municipalities with the most money dedicate more funds to education, giving rise to high levels of inequality.”

In 1971, during the Allende administration, the immense majority of students attended public schools. And when they completed 12 years of primary and secondary education, they went to the university free of charge and without the need for pre-college remedial courses.

Those were times of tuition-free public education of the same quality at all levels – a demand that is today expressed loud and clear on the streets of Chile by students who were not even born yet when the 1973 coup happened, and most of whom are not affiliated with any of the traditional political parties.

By the time the Pinochet regime had introduced all of its changes, tuition-free public universities were a thing of the past. And to enter university, students must now take admission exams – where poor students find themselves at a disadvantage due to the lower quality schools they have attended.

“What the dictatorship did was transform education into just another merchandise,” the president of the University of Chile Student Federation, Andrés Fielbaum, told IPS.

And the democratic governments that have ruled Chile since 1990 “continued to strengthen that model,” he said.

The centre-left Coalition of Parties for Democracy, which governed the country from 1990 to 2010, “invented shared financing, which means that each person buys the education they can afford, and created state-backed loans (to pay for university studies) which threw the banks into the banquet of education,” he said.

In modern societies, Milos argued, “educational systems are what make it possible to generate higher levels of equality and opportunities, and possibilities of social and political participation.”

But 44 percent of young people between the ages of 15 and 29 do not complete secondary school. And 25 percent of high school drop-outs neither work nor study – the fourth highest proportion among the countries of the Organisation for Economic Cooperation and Development (OECD), the so-called rich countries’ club.

Moreover, in Chile, families directly finance over 70 percent of the cost of tertiary education, with the state covering just 22 percent – far below the OECD average of 68 percent public funding.

Under pressure from the student protests that have been raging since 2006, governments have introduced a number of changes in education, but without going to the core of the matter – inequality.

Paulina Jiménez, a 22-year-old political science student, says “today’s crisis originated in the political reforms of the dictatorship, especially the crisis of representation that has triggered, and has been expressed by, the student movement.”

Exactly seven years after the coup, on Sept. 11, 1980, Pinochet had voters approve a new constitution in a rigged plebiscite, with no voter lists.

That constitution and the laws it gave rise to put in place “a political system and redistribution of power in society that is not exactly compatible with the essential characteristics of a democratic system,” Milos said.

The most emblematic aspect is the so-called “binomial” electoral system. Under that system, only two senators and two deputies are elected for each district. This favours the two large alliances – the Coalition of Parties for Democracy and the right-wing Coalition for Change, which is now in government.

The smaller forces, regardless of how many votes they earn, are excluded.

“That keeps the diversity of society and its social and political interests from being represented in parliament, the depository of popular sovereignty,” Milos argued.

The constitution was reformed many times since 1989, to eliminate the most irksome aspects, such as the lifetime and designated senators, including former commanders of the armed forces. But it continues to guide political life.

The dictatorship put hurdles in the way of major changes, such as the elimination of the binomial system, which require supermajorities in Congress that have never been achieved since 1990.

But the demands of the youth movement are gaining strength – a movement “that was born from having grown up in a country that we clearly do not like, that is unjust and segregated, but also from having grown up without the traumas and the dead that are the burden carried by many of our parents,” Fielbaum said.

“We aren’t afraid of politics or of dissent, because we know that it is the way we will build a different country,” he added. “And that is where our conviction for definitively eradicating Pinochet’s legacy is born.”