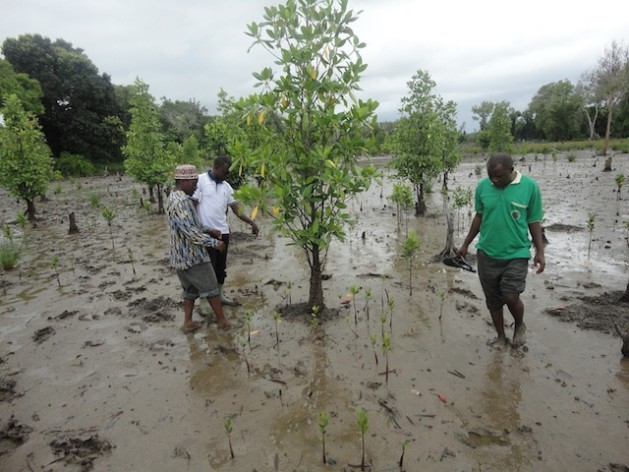 PANGANI, Tanzania, Oct 18 2013 (IPS) - Conflicts over water are increasing in the sprawling Pangani River Basin in northeastern Tanzania as farmers and herders jostle for dwindling water resources in the face of climate change. Over the past decade, Maasai pastoralists from the northern areas of Moshi and Arusha have been streaming towards the basin with tens of thousands of their cattle in search of water and grazing pasture.

“This issue should have been resolved a long time ago had there been clear demarcation." -- Omar Kibwana, a local government official

She said that although the government of this East African nation was trying to control the influx into the basin, a lack of policy coordination between relevant regional authorities made this difficult.

“This is a very complex issue whose solution requires a general consensus between the fighting groups. You don’t simply chase away cattle keepers. We must educate them on the need to respect the rights of the others,” she said.

The Pangani River Basin, which sprawls across 48,000 square kilometres, is already stressed as it faces continued demands on its water resources and ecosystems.

According to the Water and Nature Initiative of the International Union of Conservation of Nature, the basin has a population of 3.4 million people, “80 percent of whom rely on small-scale farming. Ecosystems are in decline and, with aquatic resources supplying up to 25 percent of household income in parts of the basin, the poorest are those most affected by declining water levels.”

But farmers here complain about the number of cattle that enter their fields, destroying crops and irrigation structures in the process.

“These Maasai are very selfish people, they think they are always right, even when they destroy other people’s lives. I can’t bear them, they should go back to where they belong,” Mwasiti, Isinika a farmer in Pangani, told IPS.

However, two years ago in Mbuguni village, which is about 18 km from Pangani Town, four farmers were hacked to death by angry Maasai morans (warriors) as they tried to stop a group of cattle from trampling on their maize seedlings.

Omar Kibwana, a local government official from Mbuguni village, told IPS that conflict was rife because the government was reluctant to create borders separating farmers from pastoralists.

“This issue should have been resolved a long time ago had there been clear demarcation,” he said.

The Pangani Basin Water Board said it was aware of the challenges here.

Arafa Maggidi, an engineer from Pangani Basin Water Authority, told IPS that while climate change was the main reason for the reduced water supply here, other factors such as deforestation, increasing number of livestock, and an expansion of farming activities contributed.

“The threat of climate change and the need to adapt cannot be over emphasised. We are trying our very best to educate the people to change their life styles, they must understand by destroying environment they are preparing for their own suffering,” Maggidi said.

“We strongly believe that successful management of the water resources has to integrate all environmental, economic and social demands,” he said. Going forward, scientists predict increasing temperatures, reduced rainfall and ultimately less water.

According to Pius Yanda, a professor at the University of Dar es Salaam who is also a member of the Intergovernmental Panel on Climate Change, a rise of between 1.8 and 3.6 degrees Celsius, decreasing rainfall and increased evaporation in the river basin can be expected before the end of the century.

But as they face an uncertain future, people here recall better times when the river was full and its flow was guaranteed throughout the year.

“The river has lost all its old glory, some of the fish species have also disappeared, how disgusting,” Fundi Mhegema, a villager at Buyuni village in Pangani, told IPS.