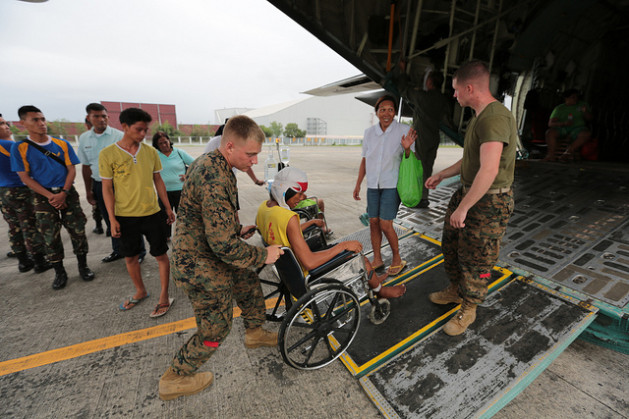 U.S. Marines are assisting the Philippine government with humanitarian aid and disaster relief in the wake of Super Typhoon Haiyan. Credit: U.S. Embassy, Jakarta/cc by 2.0

DOHA, Qatar, Nov 13 2013 - Relief operations in typhoon-devastated parts of the Philippines picked up pace Wednesday, but still only minimal amounts of water, food and medical supplies were making it to increasingly desperate survivors in the hardest-hit places.

“We need help. Nothing is happening. We haven’t eaten since yesterday afternoon,” pleaded a weeping Aristone Balute, an 81-year-old woman who failed to get a flight out of the ravaged city of Tacloban for Manila, the capital. Her clothes were soaked from a pouring rain, and tears streamed down her face.

Five days after the deadly disaster, aid is coming, but too slowly for many. Pallets of supplies and teams of doctors are waiting to get into Tacloban — but the challenges of delivering the assistance mean few in the stricken city have received help, sparking looting in some areas.

Security forces exchanged fire on Wednesday with armed men amid widespread looting of shops and warehouses for food, water and other supplies, local television reported.

The confrontation broke out in the village of Abucay, part of Tacloban in Leyte province, said ANC Television. Military officials were unable to immediately confirm the fighting.

Meanwhile, the death toll continues to fluctuate. The Philippine government says the original estimate of 10,000 killed is too high. So far, 1,833 have been confirmed dead and 2,623 injured. The total death toll will likely be closer to 2,000 or 2,500, President Benigno Aquino III told CNN on Tuesday.

But the reduction in casualty figures provided little comfort for those still waiting for basic necessities.

“There is a huge amount that we need to do. We have not been able to get into the remote communities,” U.N. humanitarian chief Valerie Amos said in Manila, launching an appeal for 301 million dollars to help the more than 11 million people estimated to have been affected by the storm.

“Even in Tacloban, because of the debris and the difficulties with logistics and so on, we have not been able to get in the level of supply that we would want to,” she said. “We are going to do as much as we can to bring in more.”

Tacloban, a city of about 220,000 people on Leyte island, bore the full force of the winds and storm surges on Friday. Most of the city is in ruins, a tangled mess of destroyed houses, cars and trees. Malls and shops have been stripped of food and water by hungry residents.

The loss of life appears to be concentrated in Tacloban and surrounding areas, including a portion of Samar island that is separated from Leyte island by a strait. It is possible that other devastated areas are so isolated they have not yet been reached.

From Cebu, to the southwest, the Philippine air force has been sending three C-130 planes back and forth to Tacloban from dawn to dusk and has delivered 400,000 pounds of relief supplies, Lt. Col. Marciano Jesus Guevara said. A lack of electricity in Tacloban means planes cannot land there at night.

Guevara said that the C-130s have transported nearly 3,000 civilians out of the disaster zone, and that the biggest problem in Tacloban is a lack of clean drinking water.

“Water is life,” he said. “If you have water with no food, you’ll survive.”

A team from the relief organisation Doctors Without Borders, complete with medical supplies, arrived on Cebu island Saturday looking for a flight to Tacloban, but had not left by Tuesday. A spokesman for the group said it was “difficult to tell” when the team would be able to leave.

“We are in contact with the authorities, but the (Tacloban) airport is only for the Philippines’ military use,” Lee Pik Kwan said in a telephone interview.

Doctors in Tacloban said they were desperate for medicine. At a small makeshift clinic with shattered windows beside the city’s ruined airport tower, army and air force medics said they had treated about 1,000 people for cuts, bruises, lacerations and deep wounds.

Thousands of typhoon victims were trying to get out of Tacloban. They camped at the airport and ran onto the tarmac when planes came in, surging past a broken iron fence and a few soldiers and police trying to control them. Most did not make it aboard the military flights out of the city.

The bodies of those killed by the typhoon are causing humanitarian and logistical problems for relief crews as well.

“It really breaks your heart when you see them,” said Maj. Gen. Romeo Poquiz, commander of the Second Air Division. “We’re limited with manpower, the expertise, as well as the trucks that have to transport them to different areas for identification … Do we do a mass burial, because we can’t identify them anymore? If we do a mass burial, where do you place them?”

Most Tacloban residents spent a rainy night wherever they could — in the ruins of destroyed houses or in the open along roadsides and shredded trees. A lucky few slept under tents brought in by the government or relief groups.

Damaged roads and other infrastructure are complicating relief efforts. Government officials, as well as police and army personnel, are in many cases among the victims themselves, which hampers coordination. The typhoon destroyed military buildings that housed 1,000 soldiers in Leyte province.

The storm also prompted a jailbreak in Tacloban. Army Brig. Gen. Virgilio Espineli, the deputy regional military commander, said he was not sure how many of the 600 inmates fled.

The USS George Washington aircraft carrier is headed toward the region with massive amounts of water and food, but the Pentagon said the ship would not arrive until Thursday. Other ships will arrive in the coming days as well. The United States said it is providing 20 million dollars in immediate aid.

Aid totaling tens of millions of dollars has been pledged by many other countries, including Japan, Australia and the United Kingdom, which is sending a Royal Navy vessel.

The Philippines, an archipelago nation of more than 7,000 islands, is annually buffeted by tropical storms and typhoons, but Haiyan was an especially large catastrophe. Its winds were among the strongest ever recorded.