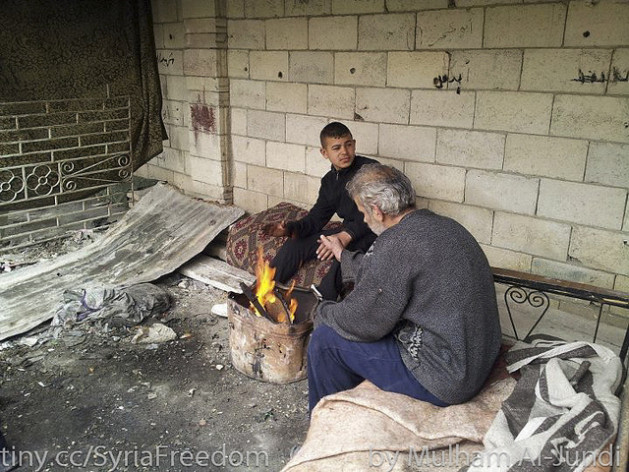 Men warm their hands by a fire in Homs, Syria, which endured two months of artillery bombardment in 2012. Credit: Freedom House/cc by 2.0

WASHINGTON, Nov 8 2013 (IPS) - The almost three-year-old Syrian civil war has been a “silent war on human and economic development”, destroying the ability of ordinary Syrian citizens to maintain basic livelihoods, according to a report launched here Wednesday by two United Nations agencies.

“There is an informal rule that it usually takes a country around seven years to recover for each year of civil war,” Michael Bowers, the senior director of Strategic Response and Global Emergencies at Mercy Corps, a humanitarian organisation that works closely with Syrian refugees in neighbouring Lebanon and Jordan, told IPS.

“And although it’s hard to justify this type of estimate, if we look at past civil conflicts such as Yugoslavia or Iraq, it usually does take at least a decade for a country to recover.”

Private consumption, the U.N. researchers note, is a direct measure of household welfare.

In addition, as many as 2.3 million jobs have disappeared since the beginning of the war, primarily due to the large-scale shutdown of economic activities in highly populated areas.

The report comes at a critical time. World leaders are currently struggling to come up with a date for the “Geneva 2” conference, which aims to pave the way for a political solution to a conflict that has left at least 100,000 people dead.

Even if that conference happens and even if a political solution is found, however, experts say the socioeconomic impact of the civil war will go on for decades. According to Alex Pollock, the director of the microfinance department at the UNRWA, the U.N. agency providing assistance to Palestinian refugees in the Middle East, it will take up to 30 years for the Syrian economy to recover to its 2010 growth rate of five percent of gross domestic product.

The economic impact in Syria is not the end of the story. The war has also had a devastating effect on key social welfare factors, including education, health assistance, and population displacement, that are going to negatively impact the country’s overall level of human development.

According to the report, as of July 2013 nearly 3,000 schools had been partially or totally damaged, many of which were eventually turned into shelters for the thousands of internally displaced persons (IDPs). School dropout rates have also heightened the deep educational crisis that is plaguing the country: by the second quarter of 2013, 49 percent, or one out of two children, had been forced to quit their school.

And while the conflict has taken a toll on school buildings across the country, medical facilities have not been spared either. The report estimates that over 40 percent of the country’s hospitals are currently out of service, making it increasingly difficult for ordinary Syrians to receive basic medical assistance, not to mention the more serious health threats posed by larger and more devastating epidemics.

Although the international community, with the U.S. and the European Union at the forefront, have been providing millions of dollars in humanitarian aid and funds to foster economic development, this assistance is unlikely to pull the Syrian socioeconomic situation out of the abyss.

International agencies such as the UNRWA have been engaged in a number of economic development projects aimed at helping ordinary Syrians to at least maintain a basic level of livelihood, including building up microfinance projects, education facilities and health infrastructure.

“We have been receiving a lot of support, primarily from the Europeans, but also from some of the Arab countries in the region,” Pollock told IPS. “And although the assistance from the Arab world has been rather small, countries such as Saudi Arabia have provided food assistance to those who have been displaced within the country.”

The Syrian government itself has been quite supportive of UNRWA’s work, Pollock says.

“We’re primarily engaged with the governing Ba’ath Party, which is also our main contact at the Syrian Ministry of Foreign Affairs,” he says, noting that the central government has also facilitated assistance to the large Palestinian refugee population in the country.

But despite the political support these organisations have been receiving, the future of the Syrian economy remains grim.

The escalation of the civil conflict has resulted in armed factions “destroying the economic and productive assets of the country,” the report argues. This has pushed the Syrian population to rely on agriculture, a highly unstable and unpredictable sector in the country.

As of Nov. 6, the war has produced nearly three million Syrian refugees, of which only 2.2 million have been granted refugee status, according to the U.N. High Commissioner for Refugees. Nearly 40 percent of these are children below the age of 12.

The catastrophic humanitarian crisis, however, does not seem to be moving toward any solution. On Monday, the U.N. humanitarian chief Valerie Amos told the Security Council behind closed doors that the “humanitarian situation in Syria continues to deteriorate rapidly and inexorably,” according to her spokeswoman Amanda Pitt. The number of Syrian people in need of humanitarian assistance may have risen to over nine million, Pitt said.

World powers, however, are still struggling to coordinate strategies to achieve a political solution to the conflict. On Tuesday, U.S, Russian, and U.N. diplomats met in Geneva to try to fix a date for the “Geneva 2” conference, but to no avail.

During a U.S. Department of State background briefing on the negotiations, a senior U.S. official noted that despite the lack of an agreement now, “the conference will take place before the end of the year.”